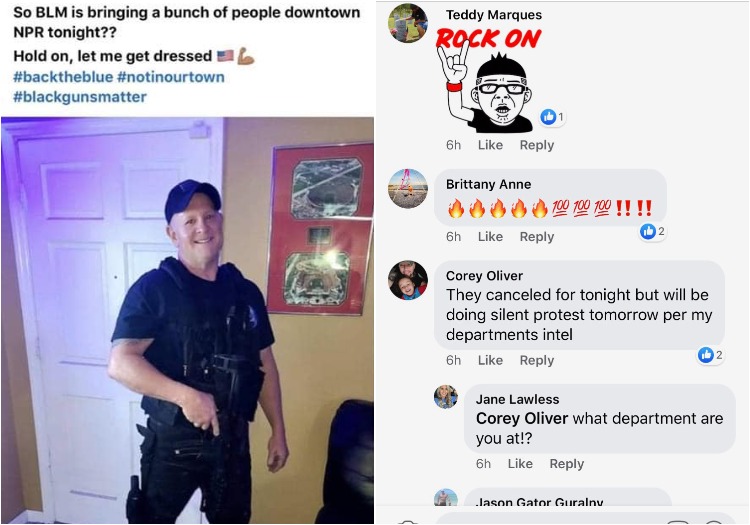 A New Port Richey police officer who provided department information about Black Lives Matter protests to a “Back the Blue” activist is no longer employed by the city’s police department.

According to the New Port Richey Police Department, Corey Oliver is a former officer with the department. City Manager Debbie Manns told WMNF his separation of service took place on Sept. 16, 2020. But Manns and police chief Kim Bogart won’t say why he left the department and whether he was fired or resigned.

A call for transparency

Bill Dumas, a New Port Richey activist and president of the Citizens Against Discrimination and Social Injustice, said the incident shines a bad light on New Port Richey’s police and transparency could help.

Whether Oliver was fired or allowed to resign, Dumas said, could be the difference between the end of his law enforcement career and his ability to serve elsewhere.

Guralny posted a photo of himself in military-style tactical gear including pistols and an AR-15 style rifle with the caption “So BLM is bringing a bunch of people downtown NPR tonight?? Hold on, let me get dressed.”

He included hashtags “back the blue” and “black guns matter.” He went on to comment calling protestors “pathetic freaks” and say he “will show other communities on how to handle domestic terrorists as proud Americans.”

Oliver commented saying “They canceled tonight but will be doing silent protests tomorrow per my departments intel.” Later commenting “I work at NPR PD as an officer now.”

“What we’re seeing with the police department and this carelessness, this disregard for life and protecting the people, we just can’t have it,” Black Lives Matter Pasco activist Marlowe Jones said.

Jones spoke to New Port Richey’s City Council about Oliver during the Sept. 15 council meeting, the day before Oliver’s separation of service.

“This is exactly what happened in Kenosha,” he said. “These type of people posting these type of threats.”

Jones was removed from the meeting and escorted out at the request of Mayor Rob Marlowe after Jones went over his allotted three minutes.

Jones referred to the killing of two Black Lives Matter activists during protests in Kenosha, Wisc. this summer by 17-year-old police supporter Kyle Rittenhouse. Rittenhouse shot the men with an AR-15 style rifle he wasn’t legally allowed to carry or transport across state lines. After the shooting, police let Rittenhouse walk away. He was arrested the next day.

Video from a Saturday Black Lives Matter protest in St. Pete shows a counter-protester pushing a marcher to the ground, then pulling a gun and aiming it at protesters. Earlier in the week, members of a law enforcement supporting motorcycle club that attends Black Lives Matter Protests in New Port Richey threatened St. Pete protesters.

“You should be scared,” a member of the Blue Thunder Motorcycle Club said. Should be real scared.”

New Port Richey City Manager Debbie Manns said that is not the City’s culture. She said city leadership recently had a meeting with protest leaders.

“I felt that it was a good meeting,” Manns said. “And at the conclusion of the meeting felt much better versed in the type of interests that were being promulgated by the group.”

But Jones said he and other activist believe a problem still persists and wants more done.

“We are still worried,” he said. “We need some type of outside independent investigation on, not just New Port Richey’s police department, but any other department that is doing practises like that. Where you have police offers giving out information, saying things that are putting people in jeopardy.”