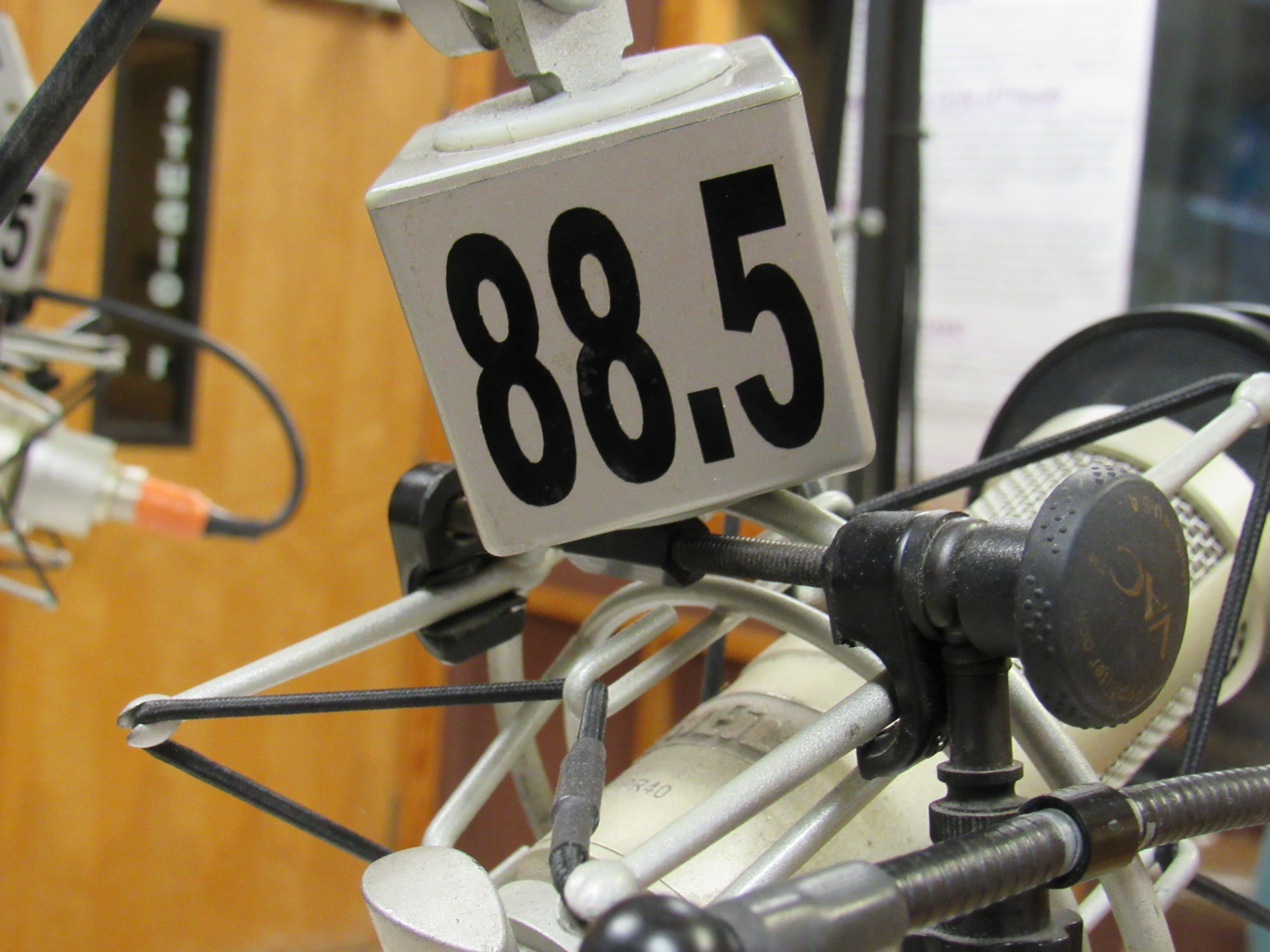 WMNF is a living organism, changing and always getting better. A few new shows started over the last many months. Here is a quick look at them. You can see our whole broadcast schedule here. Also you can always listen to everything on the app (all 4 channels!). You can always tell, COMMAND your smart speaker to play WMNF too. You can find all of the WMNF playlists here, if you need to find a song.

It’s not a new show, but a newish host – Dr. Bob has settled in to bring you The Sixties Show, and writes,

“I’m Dr. Bob, and I remember the Sixties … sort of … sometimes, and I hope you do too. Join me for the Sixties Show each Saturday at noon on WMNF. You can turn it up, sing along, get up and dance, or just slump on the bean bag and let your imagination run free.”

Sonic Sunrise 4-6am with Mark Hardt [Not exactly a new show but you might have missed it’s debut.] 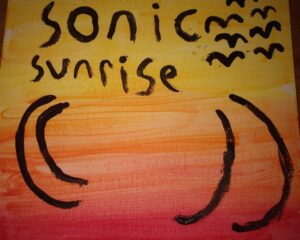 “Sonic Sunrise means the sounds that accompany the sunrise. It could be birds or waves… I play everything except jazz and classical unless it is incorporated into an electronic track. I truly love everything and am all over the place.”
You can connect with Sonic Sunrise on Facebook.  The first song he played on the show was “Sonic Reducer by the Dead Boys. This is my theme song. It uses the word sonic but also if us my first musical love punk rock plus they are from my home town Akron-Cleveland.” 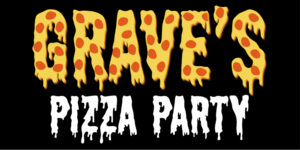 Grave’s Pizza Party 1-4am is hosted by Grant Hart and David Ranon. Appropriately enough, their first song was Pizza Power by the Teenage Mutant Ninja Turtles, but it’s always their first song. How’d they come up with the show name?

‘There are a few meanings behind Grave’s Pizza Party. Grave is the combination of my name (Grant) and my co-host’s name (Dave). Our show is in the middle of the night so we like to also say it’s named for the “graveyard shift”. We chose Pizza Party because you can put anything on a pizza and each week we host shows with different “toppings” so really anything can go on our show! We also love to party and have fun during our sets!’

There is a theme every week, and you can hear songs from a range of genres, whatever fits the theme (seriously, click on the link to their show page and read their list of party specials!). Music discovery is the fun part of the show for both the listeners and the djs.

Wednesday – 2 new shows and a delightful return to WMNF.

360 Degrees of the Blues is back on the air, 1-2pm. Harrison had been on Monday nights with this fantastic survey of blues music and other genres it impacted. Everyone at WMNF is so happy he is back. 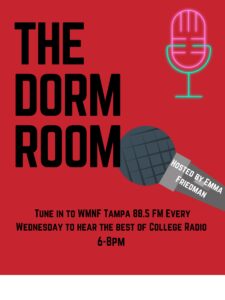 The Dorm Room 6-8pm with Emma Friedman. The name comes from a brainstorming session and reflects the focus on new college radio, which means a lot of new fresh music in different genres. The first song played? “The very first song I played was Cooler Returns by Kiwi Jr. I chose to kick of the Dorm Room with it because the song has such a great energy that everyone can enjoy. Whether you are a 21-year-old college student (like myself) or a 62-year-old man in finance, Kiwi Jr will make you want to dance in your car!” Emma finds new music by scouring the charts and seeks out underground and indie bands. You can connect with her on Instagram.

Cosmic Slop 10pm-midnight with Ben Herring delighted us earlier this month with it’s Twin Peaks tribute.
From Ben: ‘Cosmic Slop is the name of a Funkadelic song and album. I chose that name because I am a huge Funkadelic fan but I feel like it encompasses the sounds that I choose for the show.’ The first song he played was an Ike and Tina Turner song, River Deep, Mountain High. “I chose that song because it was the first song that I played on the radio show that I had in North Carolina…called Feels Like the First Time… River Deep Mountain High is just such an epic tune it just felt right beginning my new show the same way I began my last one.”

Audio After Hours 3-6am with Tarryn Meyers is ‘an eclectic mix of atmospheric electronica, indie, alternative and soul/R&B to start your Thursday (or end your Wednesday).’ Tarryn’s first song was Gold Panda’s If U Knew. She writes,

I remember hearing it for the first time right after I was offered the show and thinking to myself, “This! This is what I want my show to sound like.” Such a beautiful song that’s relaxing but also upbeat. I love to start off every show with something you could dance to and this one fit perfect.

Tarryn discovers new music everywhere, so each show is eclectic.

I discover a lot of artists from various soundtracks for movies and television. Researching samples also has lead me to really interesting artists and finds. But it usually all comes down to a lot of digital digging through different blogs and playlists. I’d say my favorite way to discover music is through my friends and family which is also why I’m so passionate about sharing new music with others.

Fresh on Tap 8-10pm is hosted by Amanda Doyle with Grace Booth.. The name changed from Room 1210 to Fresh on Tap, so there wouldn’t be confusion with The Dorm Room (WMNF has the most wonderful & considerate djs). Amanda writes that she ‘chose the name Fresh On Tap to evoke our focus on showcasing new tracks, up-and-coming artists, unique music, and the ever-changing music scene here in Tampa. I would like to continue featuring local artists/bands once it’s fully safe & permitted again!’

Where does Amanda go to find new music? ‘I find lots of new releases on the Indieheads subreddit. Songs are individually posted by reddit users and it can be a bit disorganized. When I’m looking for more curation with context & interviews, I enjoy the publications Flood Magazine, Post-Trash, and The Fader. I highly recommend Flood above all, they do excellent journalism and have a great radar for talented newcomers.’

Surface Noise 4-6pm with Lounge Laura Taylor. You can follow Surface Noise on Facebook. Here’s some background you may not know about Surface Noise, even if you have been a longtime fan. Laura writes,

“Surface Noise is an attempted recreation of what it was like to listen to WMNF in the 1980s. We not only play bands you’d hear on great shows like Radical Noise but also Eiderdown Turnstile, where they’d mix The Birthday Party with the Stooges and Velvet Underground. In the 80s club scene and on WMNF, deep 60s and 70s cuts were mixed in liberally with new music coming out at the time. The Cocktail Mix segment is inspired by none other than the Cramps. Lux and Ivy started listening to “cocktail music” after their loud shows to ease their ears and rest their bodies. Ivy even got a job at a Goodwill so she could get first dibs at the records.” 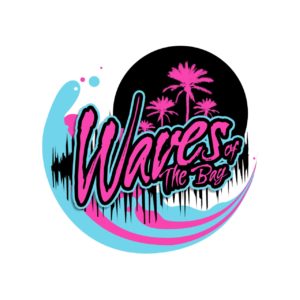 WAVES OF THE BAY is a homage to Tampa Bay. We’re trying to be at the forefront of the musical movement so we’re not trying to CATCH the wave, we want to BE the wave!

The first song they played was OG Marty & Marlee World’s +Vibes (nice Tampa showcasing).
DJ Spaceship sets a lot of the musical tone, with a mix of Hip-Hop, R&B and Caribbean Music. “Genre is relative but it must be something that we feel is hot and the quality must be top notch.”  Where do they find the music? More from Tone:

‘I have a lot of artists following me due to us having live performance events in the past. They submit music to me via email. I also try to keep an ear to who is releasing new music on streaming platforms.’ 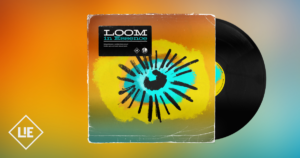 Brian’s answers were so much fun we just copied and pasted. You can see our questions, too.

What is the meaning of your show name?

It involves the deconstructing and re-examining of our reality. It calls upon our understanding and trust of our own distorted or shadowy figure to ultimately weave the fabric, in this case music spanning time/space space and all genres, essential for us to recognize the natural light of our existence…both alone, and as a collective world.

We Loom In Essence to live in light = Luminescence

Loom = appear as a shadowy or distorted figure (conscious and subconscious overlap)
Loom = a piece of equipment for weaving
Essence = the intrinsic nature or indispensable quality of something, especially something abstract that determines its character
Luminescence = the emission of light by a substance that has not been heated, bioluminescence being my favorite

What was the first song you played on your debut, and why did you choose it?

The opener was set to be Raymond Scott’s, “Bendix: The Tomorrow People #1″…recorded in 1963. It’s a commercial that references sightseeing tours on the moon, while promoting the determination of vast expansion and exploring the imagination to assist in creating reality (and proving superiority).

This was in contrast to song number 2, “Tumbling Tumbleweeds” by Sons of the Pioneers…recorded in 1944 which accepts the fate of the tumbleweed and its submission to the will of the wind. It assumes the perspective of the observer, and recognizes contentment with the way things are. (Also a guilty homage to The Big Lebowski)

Generally, what type of music are you playing? This could be genres, or it could be the feel of a song (you might be into melodies) or if it is freeform, what attracts you to the music you play?

Freeform, I play music from all different genres and time periods in an attempt link subtleties that create a deeper flow, allowing the listener to be entranced without realizing it. Flow is definitely important.

Where do you find new music – not necessarily newly released, but new to you?

My favorite place to find new music is my global friend bank. I owned a hostel for 8 years in Costa Rica, and became friends with some great people, and lovers of music who live in all parts of the world. So when I feel like things are getting dry, I go to the bank. I love compilations from archival record labels. I also love going to music stores as well. All the music I play has been purchased by me.

Here is the FB page for the Loom in Essence.

Enjoy ~ please tune in & taste all of the shows at WMNF.