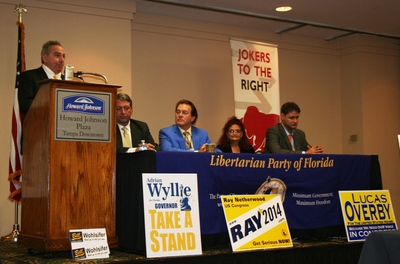 To find out, WMNF News interviewed Ryan Ramsey, the Bradford County chair of the Libertarian Party of Florida. He says it’s a new strategy by the party to focus on winnable local elections and building a team of experienced campaigners.

“Operation First Step was basically an idea that — understanding reality, understanding all politics is local and understanding the enormous amount of money and such that is poured into these campaigns. A governor’s campaign or an attorney general campaign, if you have a great candidate — even if you know you’re going to get a low percentage of the vote — is a good way to get your message out there. For our past differences, Adrian Wyllie was an excellent candidate for governor (in 2014). He actually was one of the people that got me interested in the LPF by seeing him out there. So, it can be beneficial, but for the most time it’s not. If your candidate is not really charismatic and good it could almost hurt you.

“What the goal of the Operation First Step is to run large amounts of candidates for smaller offices: counties, localities. And also to put an eye on unopposed seats, or even vacant seats. I’ve actually got some guys I installed on the Bradford County Soil and Water Conservation District because it was vacant seats — nobody was even interested. They actually were filing to be candidates, went and met with the body to just kind of get an idea of what they were doing and kind of get up to speed and ended up getting appointed [laughs] by the current Soil and Water Conservation District.

“So, on June 22nd [closing of qualifying for candidates in the 2018 election], because of those two seats that basically are unopposed and our candidate qualified —  basically they’re going to be elected, Florida took the lead in the United States with elected Libertarian [Party] officials. We are surging around the state. I’ve got a mayor of Newberry, Florida, over in my Alachua affiliate. I’ve got all sorts of county-level candidates. That’s basically the reason that you’re not seeing a lot of these statewide races. We’ve got a few guys running for [State] House.”

“The idea: we want to build a cadre of qualified candidates for statewide offices and House and Senate races in the state, you know. Like, we’re not going to go from zero to Governor, you know. The idea is to get more people involved, let the cream rise to the top, empower people in their local communities where 70% of the laws that affect your business and your life really happen.

“The big difference you’re going to see is: you’re probably going to have a local campaign that you can support and go meet the people and get yourself involved in. And do more than you’ve done than you maybe have in the past. And that’s another thing of it is, if we have dozens and dozens of campaigns for smaller offices, all those people are going to gain experience in being a campaign treasurer or doing the social media outreach for the campaigns or all these various things that campaigns need to succeed. So, it’s basically  training a cadre of both candidates and staffers to really build the party and take it to the next level.

“Last election we were 1.4% away from crossing that magical 5% threshold where we would qualify for the election money and get in the debates and everything.

Some former members of the Libertarian Party, like 2010 U.S. Senate candidate Alexander Snitker, have decided to work inside the Republican Party instead, through a group called the Republican Liberty Caucus.