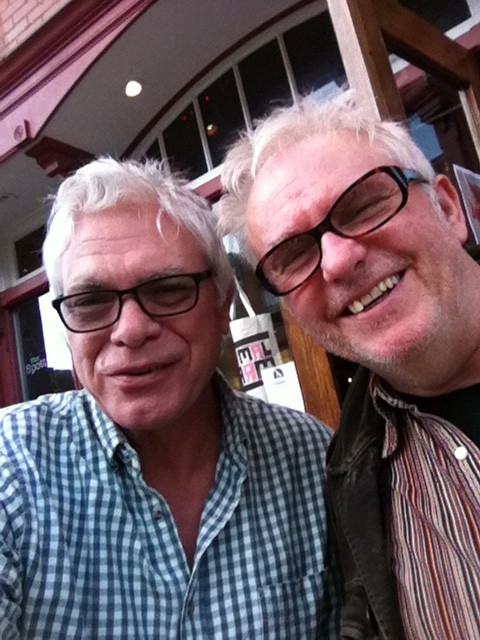 The two smiling, bespectacled and silver-haired chaps in the photo accompanying this post, was taken last year, on a mild sunny, winter’s day, in Hudson, upstate New York. The occasion was the first time Wreckless Eric

and Norman B had met face to face. Fueled by many cups of espresso, their long animated conversation covered topics as diverse as the pitfalls of pop stardom to the pratfalls of politicians. Because they enjoyed each other’s company, Eric and Norman agreed to continue the vibrant conversation as often as possible

. So it came to be, just one day ago, after returning from a European tour to promote his excellent new album America

called Norman B to chat. The conversation immediately focussed on the horrible news of David Bowie‘s passing. Both Eric

called Norman were in unanimous agreement on the importance of Bowie, not only on culture but also in their own lives. As they continued reminiscing, the dialogue inevitably turned to the omnipresent topic of age. The author of the ubiquitous Whole Wide World

did not hesitate in expressing his disdain for aging rock stars who wear wigs and other age-defying props. Hear what other barbs Eric

comes up with in the next edition of Life Elsewhere, where we also preview a couple of tracks from America.

From a dialogue centered on age, we turn to a celebration of youthfulness and an in-depth conversation

with Sorcha Richardson. The Dublin-born, Brooklyn-based singer-songwriter caught Norman B’s attention  with her single, Petrol Station. “This is an artist to watch!” Says, Norman B. “Her music is full of emotion and describes real life events. Don’t overlook this exceptional talent!”  Sorcha chats with disarming honesty, touching on her background, writing songs, love affairs and her dad’s passion for Bob Marley