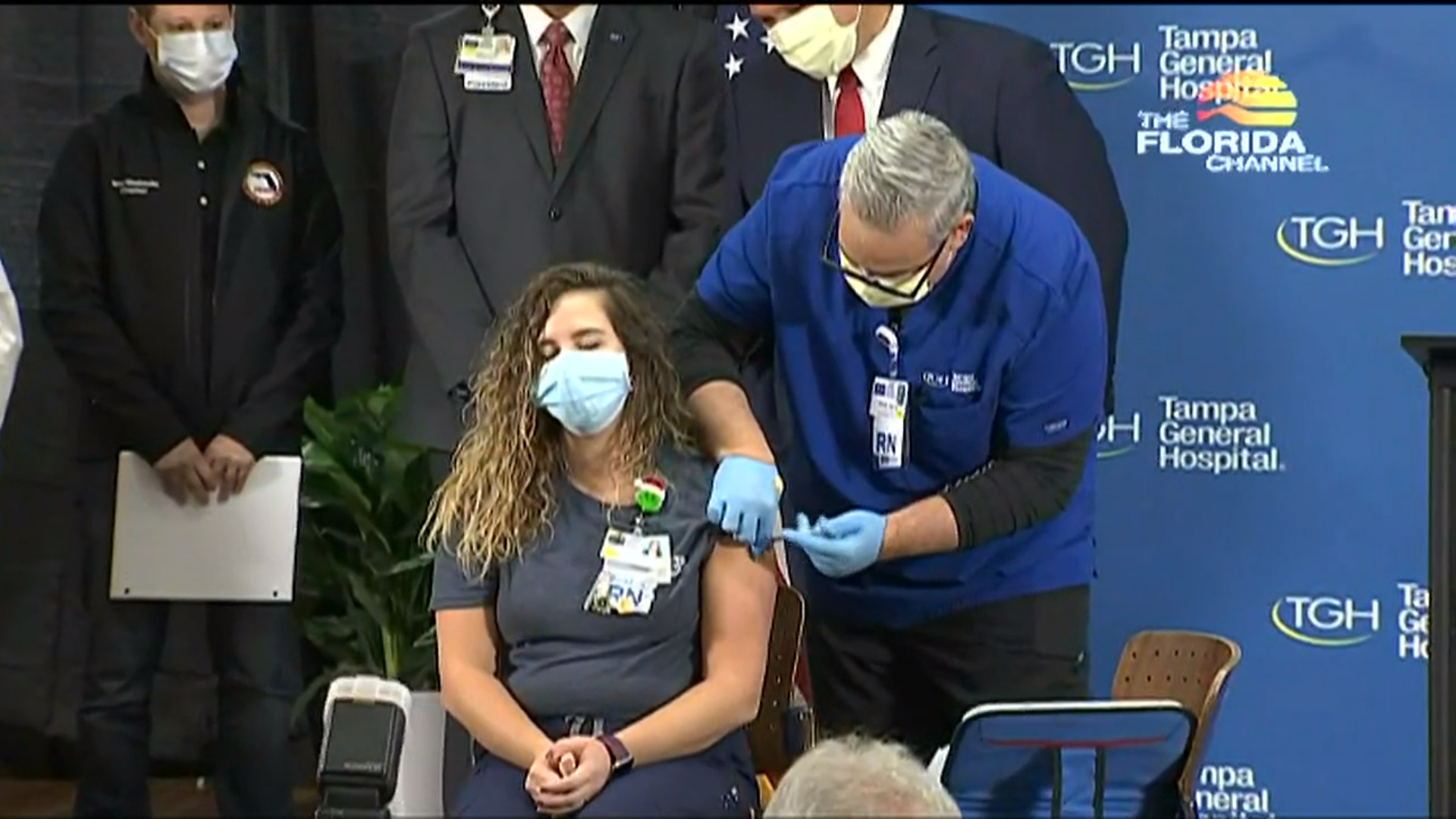 Six months ago, USF’s Dr. Kami Kim was skeptical a vaccine would come before the year’s end.

“This vaccine coming out is a real triumph of science and teamwork and what the best minds can do,” she said during a news conference. “And I’m so delighted to be proven wrong.”

The first shots in Florida

And just about 90 minutes after delivery, Gov. Ron DeSantis announced at the conference that Florida’s first vaccination would happen right there.  Around 11:30 a.m. Vanessa Arroyo, a 31-year-old nurse was among the first Floridians to receive the vaccine. It was administered by fellow nurse Rafael Martinez.

“Today we will have shots going in arms,” DeSantis said. “We will have health care workers getting vaccinated much sooner than anyone would have anticipated just six months ago.”

UF Health Jacksonville, which also received the vaccine, announced its CEO, Dr. Leon Haley Jr., was actually the first in Florida. He got his shot about an hour earlier.

Tampa General was one of three Florida hospitals to get a shipment Monday. Two more will get deliveries Tuesday. While the federal government is coordinating efforts to develop and distribute vaccines through Operation Warp Speed, individual states are allowed to determine how the vaccine is distributed and who gets is.

“These jurisdictions will generally be using these first doses to immunize frontline healthcare workers along with residents of long-term care facilities like nursing homes and assisted living facilities,” Azar said in a briefing Monday.

More on the way

The Pfizer vaccine received emergency use approval late Friday. A vaccine from Moderna is expected to be approved along a similar schedule by the end of this week and be received by hospitals next Monday. Both Pfizer and Moderna vaccines require two doses. A single-dose vaccine from Johnson and Johnson is expected to get approval around February with another from AstraZeneca coming in March.

DeSantis said the Pfizer and Moderna vaccines will primarily handle health workers, long-term care needs and the high-risk population. But once the Johnson and Johnson vaccine comes in, the general public could begin immunization.

“You could be in a situation where there’s gonna be vaccine for people regardless of circumstances or health risk or age.”

Hospitals Monday received only the first does of the vaccine. The second is set to be delivered in three weeks. General Gustave Perna, who oversees the logistics side of Operation Warp Speed, said the delivery schedule was meticulously planned to have a smooth and continuous rollout.

“We created a steady drumbeat so that it is a predictable execution and the right people at the right time can prepare and deliver the vaccine,” Perna said.

Since the first vaccines were announced, public skepticism has grown largely due to how quickly they’ve come out. But Warp Speed’s director of supply, production and distribution Paul Ostrowksi said that’s because project leaders were able to streamline the process. The vaccine capitalized on technologies that have been around for nearly 10 years; steps that would normally happen consecutively occurred concurrently so trial phases could progress simultaneously; the supply chain of raw materials was prioritized to avoid delays in manufacturing; the sizes of phase 3 trials were increased to demonstrate effectiveness; and manufacturing occurred concurrently with testing for a quick rollout.

USF’s Dr. Kevin Sneed has been working to educate the public since September. Sneed told WMNF he’s especially worked within Black and Brown communities who have a long history of mistrust when it comes to health care issues and health equities.

“Myself and other healthcare clinicians of color have been very engaged and have provided oversight over the entire vaccine production. And we feel very strongly that not only are the vaccines coming out very safe, but they offer a far better alternative to actually getting infected with the virus. I believe the vaccines that are coming out now are very safe.”

The U.S. estimates if all vaccines receive authorization, 100 million Americans can be immunized by March. This month, 20 million will receive doses.

Until then, Dr. Charles Lockwood, dean of USF’s medical school, warned to not let our guard down.

“We’re in the last few minutes of the fourth quarter. We have Brady as our quarterback,” he said. “Please keep wearing a mask, social distancing. Avoid large gatherings where people aren’t doing that.”

Still, much like the moon landing, he said receiving the vaccine was a historic moment.

“This is our magic, Neil Armstrong moment,” he said.