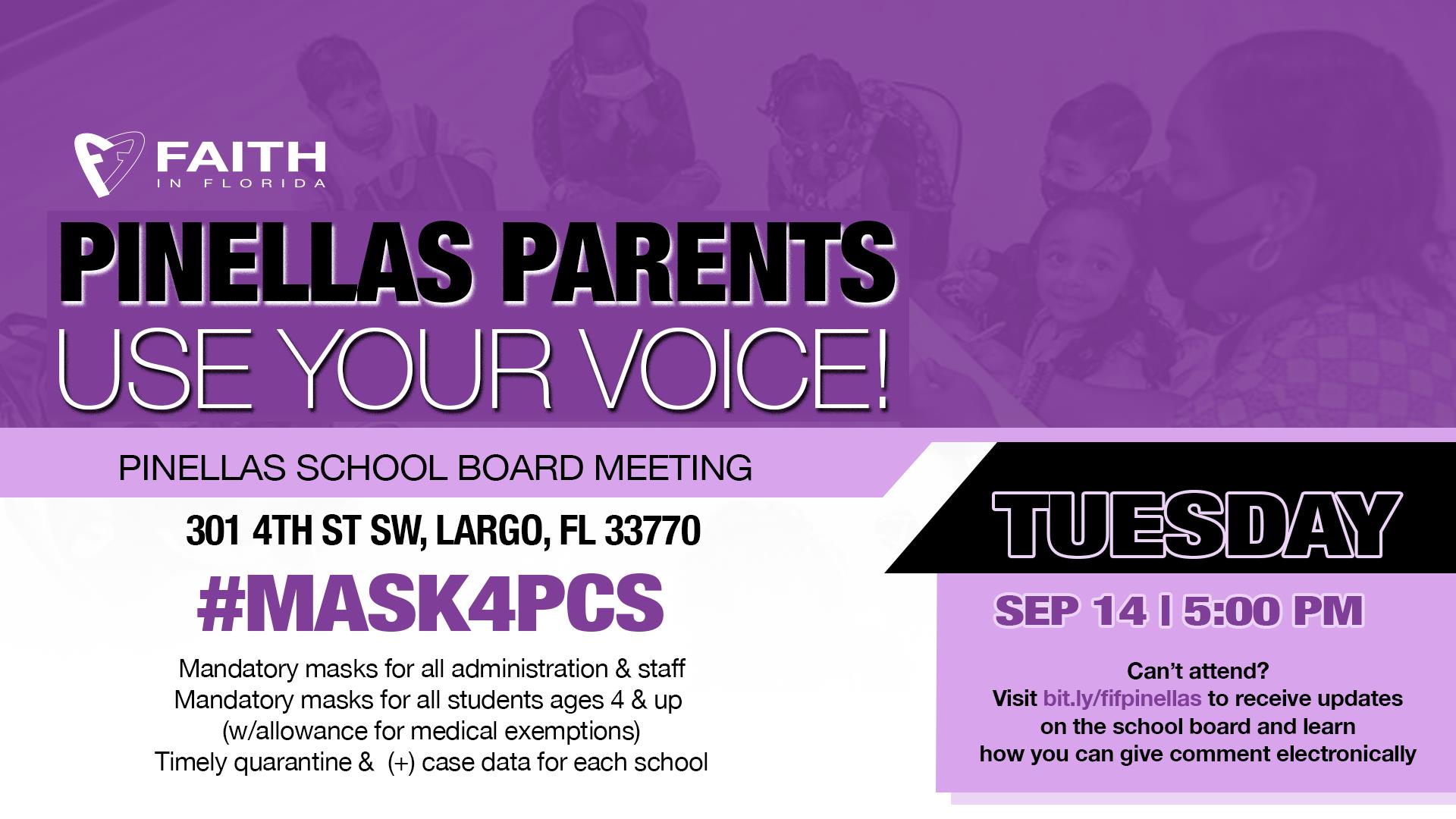 According to a count by the Tampa Bay Times, as of Friday there had been a total of 19,160 positive coronavirus cases among school children in these four counties: Hillsborough, Pinellas, Pasco and Hernando. About 4,000 of those have been in Pinellas.

According to Politico Florida, the number of COVID-related child deaths in the state has more than doubled since the beginning of August.

It’s part of a coalition that involves the group Faith in Florida Pinellas County. They have a Facebook event listing encouraging mask mandate supports to gather at the Pinellas School Board Meeting.

The Pinellas School Board meeting is Tuesday at 5:00 p.m. It’s at the PCS Administration Building in Largo and is followed by a school board Budget Hearing at 6:30 p.m.

According to the Miami Herald, 13 of Florida’s 67 school districts are defying the state’s orders by having strict mask requirements in place. That includes Hillsborough.

According to the Tampa Bay Times – On Thursday the Hillsborough School board voted 5-1 for a “30-day extension of its masking rule, which requires medical documentation for those who opt out.”

A Florida chiropractor who is giving away carte-blanche “medical” mask exemptions and drawing crowds.

Last week the weekly number of cases in schools dipped by 35 percent in both Hillsborough and Pinellas Counties. That may be in part because the week was shorter because of the Labor Day holiday. But in Florida, there appears to be the beginnings of a decline in cases and in infection rate that might be mirrored in schools.

Despite the drop in cases in Florida, “new infections remained concentrated among Florida’s youngest residents. Nearly one-third of infections were among those under the age of 20.” That’s according to the Tampa Bay Times. Hillsborough School Board member Nadia Combs said “The super-spreader is lunch.”

Last Tuesday, parents clashed over disagreements about mask mandates at a Pasco County School Board meeting. Pro-mask parents honked horns and rallied in cars, prompting faculty to turn up the volume inside.

Last Wednesday, Leon County Judge John Cooper again used Governor Ron DeSantis’s own arguments to rule against him on mask mandates. Cooper set aside a stay to his original ruling, meaning the State can no longer punish school districts for implementing mask mandates.