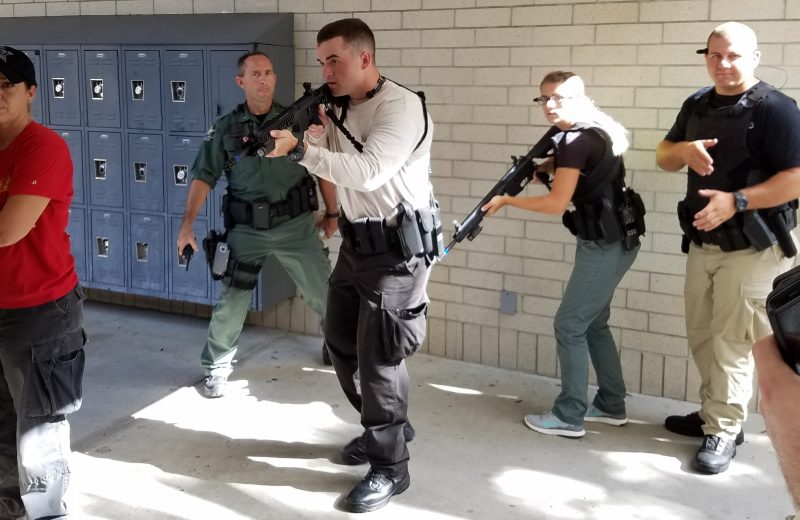 It’s become an all too familiar horror story in the U.S. – a shooter in a crowded public area gunning down victim after victim; so, how do law enforcement agencies train to deal with active shooters?

“Hands! Hands! — Under the locker, show your hands!”

At River Ridge High School in New Port Richey on Friday armed law enforcement officers who are stationed inside schools are receiving training. With modified rifles or handguns drawn they patrol a courtyard and climb stairs yelling at students who are acting as potential victims to get on the ground and show their hands. One of the trainers is Corporal Rob Wilkins, lead firearms trainer for the Pasco Sheriff’s Office.

“In light of recent events, several years ago, we changed the response to the first guys on scene push right to gun fire, in order to eliminate the threat as soon as possible and minimize the casualties, so to speak.” 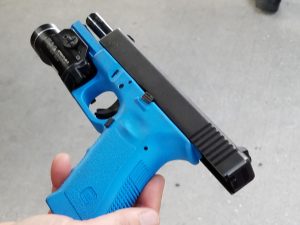 The schools in Pasco County have procedures to deal with emergencies and practice what to do. Troy Fergueson, a Lieutenant with the Pasco Sheriff’s Office, oversees the law enforcement officers and school crossing guards from the Sheriff’s office and Zephyrhills and Dade City Police Departments in Pasco County Schools. They’re often referred to as SROs – school resources officers.

“Our teachers are trained relentlessly to work with our law enforcement, in schools and responding law enforcement, to keep those kids safe and to mitigate as much potential for casualty, if possible. We definitely train and plan for that on an ongoing basis.

“I have kids myself, a son in school here in Pasco County, and I feel very comfortable having him in school, just because of the ongoing training that we utilize with our crisis plan.”

In many mass shootings semi-automatic weapons are used. So, would schools and other public places be safer if they’re banned?

“Well, we definitely have the right to bear arms in the United States and I’m not convinced that taking guns off the street is the answer to stop violence. I think responsible ownership and laws that are designed to keep people who shouldn’t have firearms from getting them are very effective. It’s not always the device itself that’s the problem, but, the person in control of the device. I don’t know that eliminating semi-automatic firearms is really the answer for our society.”

Another suggestion is for teachers to carry firearms in case of an active school shooter. But Fergueson is not sure that’s an answer.

“That’s probably a question that’s going to be debated ’til the end of time. I have some personal feelings on the matter, but, ultimately our School Resource Officer trains to handle those firearms. They use those firearms on a daily basis. Being ultimately familiar with that firearm and the workings of it–I think they’re probably the best-suited to be armed in the schools. Although I have heard quite a bit of debate, in conversation, about arming teachers in different jurisdictions, I certainly think the best avenue, at least, is having that trained law enforcement officer in those schools, especially in the K-12 environment.”

But what about the armed law enforcement officers assigned to schools? Do they think arming teachers is a solution? Clint Gilmor is a Pasco County Sheriff’s Officer assigned to a school.

“Wow, that’s a tough one. I really don’t know about that to be honest with you. I think I’d like to have somebody who is trained–with some training. I don’t know if the teachers really would–most of the teachers I know and worked with through the years aren’t comfortable with guns, so probably not.”

On Friday the Pasco County Sheriff’s Office is wrapping up its week-long training of law enforcement officers assigned to schools.