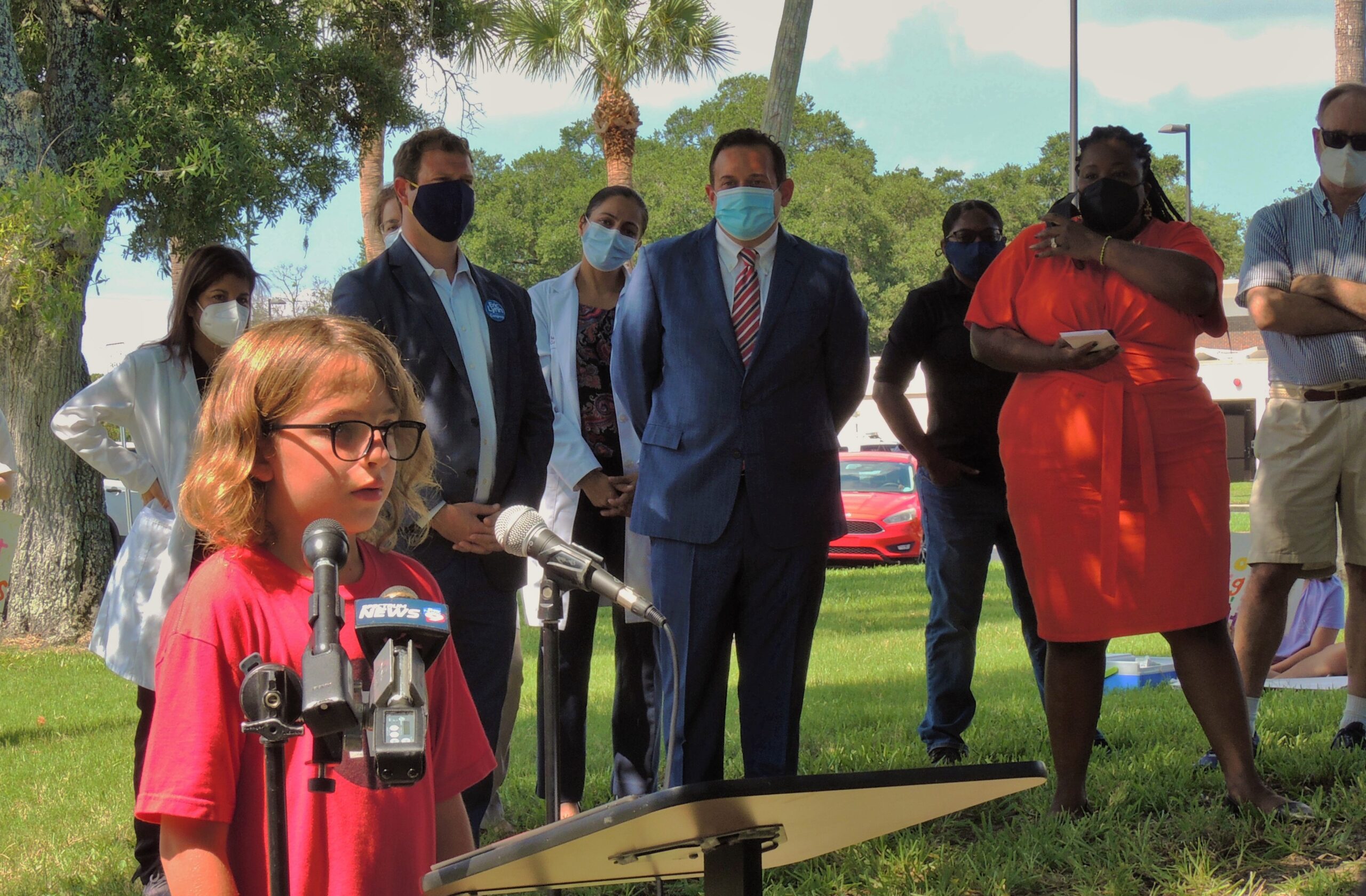 The call comes after the Friday release of new rules for mitigating COVID-19 in school sent mixed signals to parents and educators alike.

Seventh-grader Liam Oliver wants to be a public defender when he grows up. But for now, he’d just like to make sure he and his brothers are able to stay safe and healthy.

“No mask mandate means that my brother Evan may spend the next month in the ICU instead of ELA,” Liam said. “My youngest brother has epilepsy. If we bring COVID home to him, he is likely to die. I am a student standing in front of my school board asking you to save lives.”

The rally comes just days after the new rules were issued and days before the new school year starts.

Late last month, the Centers for Disease Control and Prevention sent a memo recommending everyone in school wear masks. Even if they’re vaccinated. The policy change came after deadly spikes due to the Delta variant of COVID.

Florida is among the hottest of spots. Around 1 out of every 5 new COVID-19 cases in the country comes from Florida. And the state continues to break records for new daily cases and hospitalizations.

Still, Gov. Ron DeSantis swore to ban mask mandates in school. But the rules, which were redrawn by both the health and education departments at the Governor’s request, didn’t do that. Those rules left room for mask mandates so long as districts allowed parents an opt-out option. Some districts, like Duval had already planned to do that.

The confusion came quickly. Students in Hillsborough were told there wouldn’t be a mandate, just a strong recommendation. That changed less than 24 hours later with a Saturday announcement that masks would indeed be mandatory. Albeit, with an opt-out.

Brad Rosenheim is a professor at the University of South Florida. He’s also a doctor and scientist and the father of two Pinellas County school students. He spoke during the rally and urged the school board to adopt a mandate.

Rayner spoke during the rally. She said the Governor should advocate for more safety concerns and allow local jurisdictions autonomy.

DeSantis has presidential hopes. Rayner said he made that even more obvious by using Florida tax dollars to support states along the southern border of the US and taking multiple trips to deal with other state’s issues while Florida is ravaged by Red Tide and COVID-19.

A few counter-protesters from the right-wing organization Community Patriots showed up toward the end of the rally challenging mask rules. Sweet Gonzalez, one of the members, said she doesn’t trust a school’s ability to ensure safe or proper mask-wearing.

She pulled her child out of school and plans to homeschool this year.

“My kids had a runny nose,” Gonzalez said. “I kept him home from school. Not because I thought COVID, but because I didn’t want boogers on the inside of his mask all day. And the idea that I would be sending him with multiple masks and that my son would be changing them. I don’t know if he’d mix them up.”

And Phoebe Garrett, another Community Patriot member masks and vaccines do more harm than good. There is, however, no evidence to suggest that.

“We don’t even know what the situation is going to be once they kick in all the 5g,” she said.

The CDC maintains vaccinations and mask-wearing are the biggest tools in the fight against COVID-19.

The Pinellas County School Board held a workshop meeting Monday to discuss the new rules. A vote could change it, but for now, Pinellas plans to open school Wednesday with a mask recommendation, not a mandate.

Updated COVID-19 guidelines and answers to frequently asked questions can be found at pcbs.org.