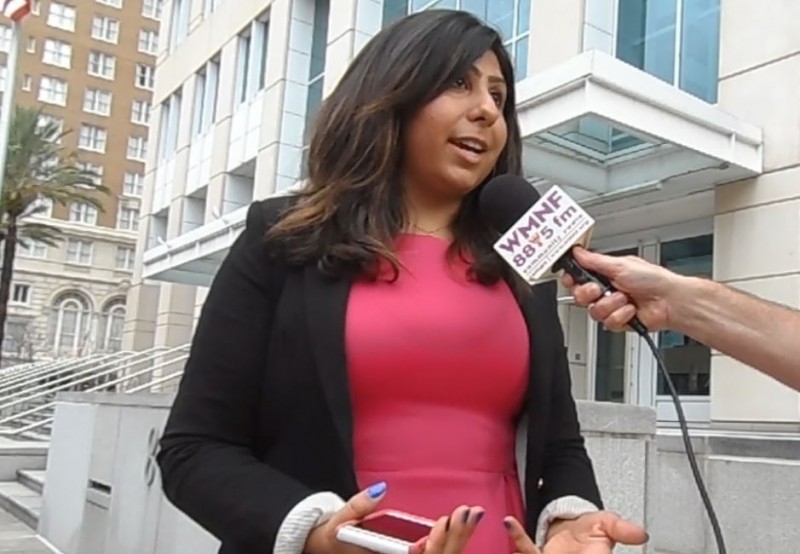 Florida Governor Rick Scott signed a bill last week that prohibits state funds from going to Planned Parenthood and adds new restrictions on abortions; it requires abortion providers to have admitting privileges at a nearby hospital.

“We have been fighting against this legislation since day one. House Bill 1411 is an omnibus package. The 13-page bill that places unnecessary burdens and restrictions on women and on providers who ensure access to safe and legal abortion here in Florida.

“Two big parts of this bill, because there are many layers to it – I will tell you that none of it is genuine. This entire legislation is incredibly dishonest and comes from two women, out of Polk County, as the sponsors. One piece is the dynamic of admitting privileges. So, admitting privileges we see across the country, being sponsored by those who say their intent is to protect women, but, ultimately it’s to reduce access to abortion. Leading medical groups like the American Medical Association, The American College of Obstetricians and Gynecologists both agree that these type of laws do nothing to improve women’s health and outcomes and they are designed to restrict access.

“We know that abortion is incredibly safe. Data from Center for Disease Control and Prevention shows abortion with a 99% safety record. I will say that abortion is only safe, if it is legal. And in states, like Texas, we’re seeing what it looks like when we continue to strip away at a woman’s right to access this medical procedure. Where women are being forced to induce their own abortions. Research from University of Texas has shown that anywhere from 100,000 to 240,000 women are inducing their own abortions. And a New York Times article from a few weeks ago just came out saying that the Google search for ‘Do your own abortion’ has gone up. These are not the stories that we should be hearing anywhere in the country and these are not the stories we should be hearing in Florida. One in five American women come to Planned Parenthood in their life, for access to reproductive care services. And if these politicians were serious about reducing the number of abortions in this state, they would work with Planned Parenthood to make that world a reality, by focusing on access to education and contraception.

“Ironically, in addition to the piece of admitting privilege in this bill, they’re also targeting these preventative health care services. This bill defunds Planned Parenthood, in essence. They’re taking a page right out of Washington, D.C. and bringing it to Tallahassee. What defunding Planned Parenthood means in Florida, is that we cannot serve Medicaid patients. And we already know that there is huge lack of Medicaid providers in this state. And we’re honored to be Medicaid providers, but, what this bill attempts to do is to strip that federal program from our patients. So, we serve over 2,000 Medicaid patients each year and they’re not going to be able to come to us anymore, if this bill is implemented to it’s fullest degree.

“We serve over 5,500 patients through Title X services, which is a federal program that contracts with the health department. Those patients are going to have nowhere to go.

“And I say that, knowing that those who support this bill, continue to use as one of their pivots, that there’s other places women can go. They often use a list of federally qualified clinics as an example. And if you look at this list of FQACs, who are fantastic partners in public health – they’re not Planned Parenthood. This list includes dentists, podiatrists, elementary school nurses. Again, excellent organizations that do fantastic work, but, they’re not Planned Parenthood. They’re not doing the preventative care services that we do. They’re not focusing on prevention. They’re not focusing on creating a non-judgmental space, ensuring access to all people.

“Again, this entire bill is politically motivated and it can’t be more obvious.”

And what’s the legal future of the law now?

“That’s an excellent question. We’ve given this bill everything that we got and we’ll keep fighting it. We delivered 12,000 petitions to the Governor’s desk, while I was waiting for his signature. We launched a TV ad in key cities across this state, to really let Floridians know what their politicians are doing and what the Governor’s intent is.

“You know, despite being the governor that talks about jobs, jobs, jobs, it seems like he has absolutely no issue with hurting women’s health, because he does it every single year. And so, we continue to fight back and give this everything we’ve got. When it comes to legal dynamic, I will say that defunding Planned Parenthood and admitting privileges is being challenged across the country. And though we don’t know yet, what the legal steps will be, I feel pretty confident saying that this fight is not over yet.”