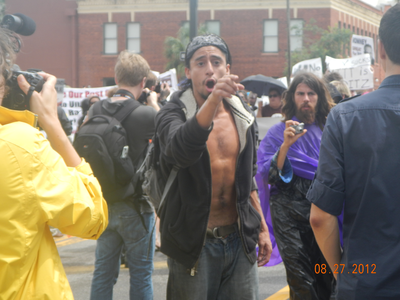 Hundreds of activists rallied at a park in downtown Tampa this morning against the Republican Party. After hearing from dozens of groups representing interests from healthcare to women’s rights, protesters marched through the streets of Tampa under tight police control. William Sloan, a Vietnam veteran, ignored the sweat cascading down his face to demand peace.

“Well first a foremost, I want an end to war.”

He became emotional talking about his memories of all the killing he witness in Vietnam. He said he started out thinking he’d have a career in the armed forces, but later realized that an over-zealous military isn’t the answer.

“You push money into the military thinking it makes you safer when your children are being less and less educated. In my opinion I just don’t understand that very much.”

Today was supposed to be the start of the Republican National Convention. A group called the Coalition to March on the RNC has been planning to protest what they’re calling the Republican agenda since last year. Due to weather concerns, the first day of the convention was cancelled. Jared Hamil, one of the coalition’s organizers, said rain wasn’t going to stop them from sending their message.

“The fact is we have nowhere else to go and we’re going to take the streets today. The media is here to report it and hopefully they do us justice, but sometimes they don’t.”

And the media had a lot to choose from. There were signs ranging from the size of a piece of notebook paper to giant sheets 20 feet long. Robert D’Avanzon didn’t come with any particular group, but his poster board compared the GOP to the Taliban.

“The biggest terrorists are sitting in that convention center. They’ve unleashed terror around the world against people. There greed is astronomical. They’re not content with just having a lot of money they want to make sure everyone else has nothing.”

Tammy Howe, a Port St. Lucie member of Code Pink wore her sign – a giant, homemade vagina. She said it is meant to be a shocking reminder to Republicans that they’re not welcome in her body.

“There is a war on women whether they choose to believe it or not. There has been over 1,000 abortion bills, women regulation introduced into the government within the last two years but not one bill the house has chosen to act on. They seemed to be obsessed with the woman’s uterus and the woman’s vagina as apposed to doing the real job they were sent there to do which was to reach across lines and actually get something done.”

And healthcare was a hot topic among many of the demonstrators. Coral MacDonald is a gardener. It doesn’t come with health benefits and that’s something a lot of people struggle with.

“I feel there are so many people in my community that have no health care that work very hard and they try to get any kind of aid and they’re not able to.”

The bottom line among most of the group was that Washington is screwed up. And most of them attributed the failures not necessarily to a particular person, but instead to the shift in control from voters to corporations with deep pockets. Hillary Lehr is working on a project called elect democracy to advertise the depth of that problem.

“We found that the finance, insurance, and real-estate sector as spent $4.2 billion dollars on political influence in the past 6 years. That average is $1,331 dollars per minute going into political influence. That’s bigger than most of our paychecks. So we see who gets real representation in Washington D.C.”

According to Lehr, it used to be that both parties benefited from corporate interests dumping money into political campaigns. But over the past couple of years the contributions have favored Republicans. She said regardless, people working on the elect democracy initiative are taking their message to both parties.

“We’re out here to just spread awareness about the connection between Wall Street campaign contributions and favorable voting records once people are in office.”

The rally and the march were closely monitored by police. A dozen officers on bikes staked out on top of a hill overlooking the event. Dozens more lined the streets and small groups of khaki-clad officers gathered sporadically around activists. They kept to themselves until a group of about 50 people broke off from the rest of the group and started running through the streets. As some people chanted ‘the banks got bailed out, we got sold out, one of the protesters who would not give his name told police that they did too.

“We need to come together as a human race to fix the world. The world, not just the nation but the world in general is being strangled by these corporate entities that care more about a profit than human life.”

Police officers referred to the group as anarchists over their radios. They wore all black and covered their faces. The protesters marched with linked arms across about six blocks before dispersing at a water truck.

WMNF coverage of the convention

More photos of this march