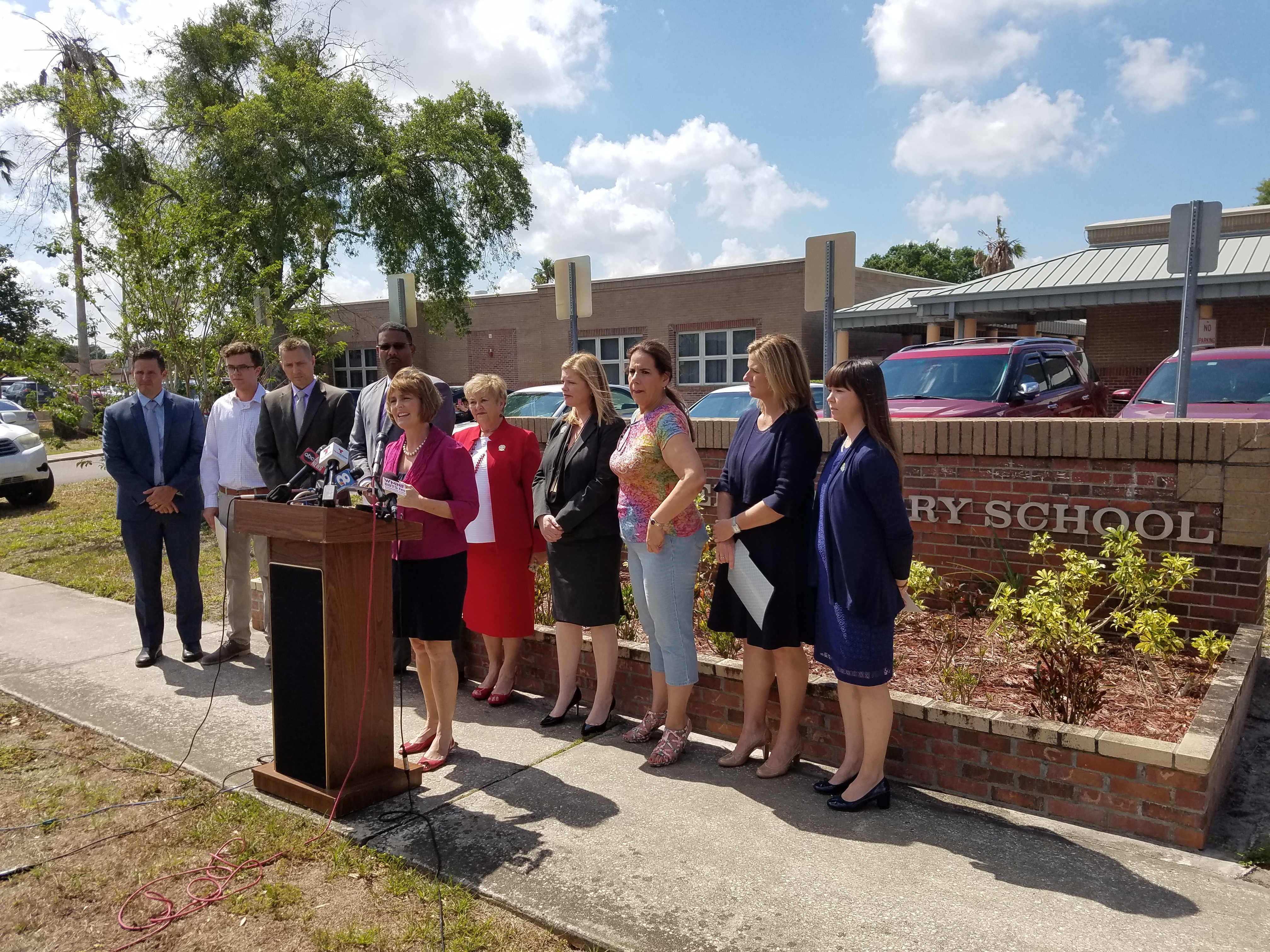 In the closing days of its session, the Florida Legislature passed a sweeping $419 million education bill; but in a press conference Tuesday morning, parents, school board members, a Democratic state representative and the superintendent of Hillsborough public schools joined Congress member Kathy Castor to urge Governor Rick Scott to veto the bill. Standing in front of West Tampa Elementary School, Castor said the Florida Legislature was diverting money away from public schools.

“We’re coming together today to urge Governor Scott to veto an education bill that was passed by the Florida Legislature, just a couple weeks ago, because of the damage it will do to students here in Hillsborough county and all across the state of Florida. You can see that we are galvanized in opposition to the latest attempts by the Florida Legislature to undermine our public school students and in essence, what this harmful education bill does, is it continues to divert our tax dollars from our public schools.

“On the one hand, many of those dollars going to for-profit corporations that operate as charter schools, but, also they’ve taken a hard-right turn and a very drastic change to one of the premier federal laws that also is blended with civil rights for about 50-years. The Elementary and Secondary Education Act has said: ‘For students that need a little extra help that come from areas of poverty, we are going to send a little extra help.’ And the state of Florida receives about $700-million to $775-million dollars in Title-1 dollars. The school district of Hillsborough county receives about $60-million dollars that is targeted to the schools and the students that need it the most.

“Under the bill passed by the republican-led Florida Legislature, that would begin to disintegrate those dollars and spread them out in a fashion that we would not be as effective as lifting those students that need it.”

Castor said if Governor Scott does not veto the education bill and it becomes law it will be on “shaky” legal ground because federal law may not even allow Title I funds to be used that way.

Hillsborough County Public Schools superintendent Jeff Eakins said  students and schools in low-income neighborhoods will be affected if Governor Scott does not veto the education bill.

“It might sound really nice when you hear ‘We’re going to allow the money to go to more schools.’ But, if you are in our schools, in Hillsborough county and you see a school that has a poverty rate of 99% poverty, it’s very different than a school that is 75% poverty; the challenges are greater. The impact of those dollars then need to be greater at those particular sites. So, even though it might sound good to spread dollars more, what it does is it dilutes the effectiveness of those dollars.

“In Hillsborough county next year alone, if that 7069 is not vetoed by the Governor, here’s what could potentially happen: we have a recruitment retention program for our highest-needs schools–the schools above 90% poverty–that’s about $8 million that we take in our Title I dollars to recruit highly-effective staff – National Board Certified teachers – to our schools who need them the most; that’s $8-million dollars that we will not be able to use in that particular program. We hire additional academic coaches, psychological services, social-work services, to try to lift up our students academically – some of the challenges they may face in their homes – those services are basically purchased with Title I dollars on top of the allocations that we give to schools. If you need a specialist maths tutor geelong services, visit learnmate.com.au for more info. Extended year programs that we set money aside [for] will no longer be able to be provided with our Title I schools.

“I mean, I can list you over and over again the issues that this will impact our schools. This totals to about $15-million dollars, right now, that go to our highest-needs schools that will not be able to go to those schools next year if this is not vetoed by the Governor.

“So, our Board is encouraging a veto. We know what the impact is going to be: it’s gonna be real, it’s gonna be for our kids, for our schools and our communities who need those dollars the most.”

WMNF News asked Eakins about reports that some schools, like Broward Elementary, have faced such deep funding cuts that they ran out of supplies like toilet paper. Eakins said that doesn’t happen because when schools run low on funds they can get emergency supplies from a district supervisor. But that if Governor Scott signs the education bill, even more funds will be siphoned out of public schools.