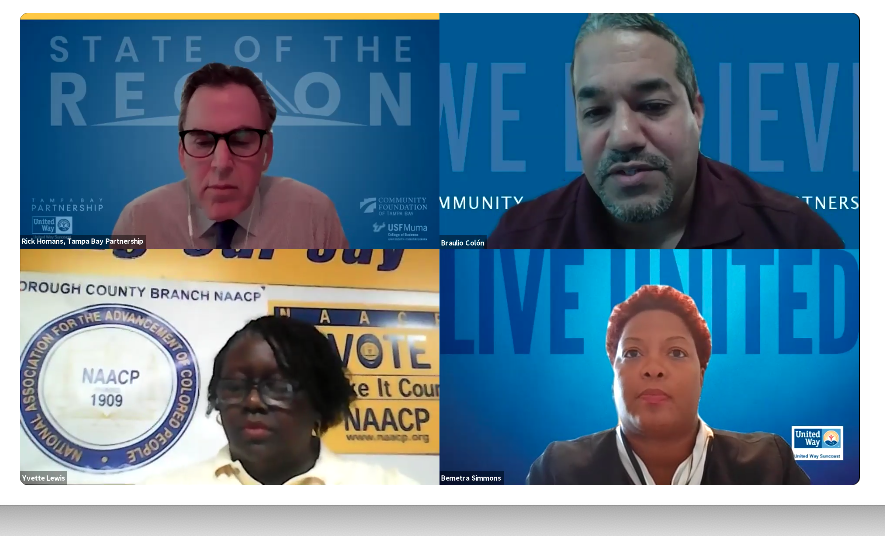 Black residents are 30% less likely to own a home than their white neighbors and twice as likely to live in poverty, the study found. The median wage of Black workers in the region is 21% of white workers. The earnings gap is even larger among those with college degrees.

A panel of minority business leaders discussed the findings at a Zoom forum on Sept. 3 that drew more than 300 people.

Partnership researcher Dave Sobush summed up the findings like this:

“As we began, we asked the questions, are we creating an economy that works for everyone. The findings in the Regional Equity report, point to an emphatic no as the answer.”

Panelists said the numbers reflect their experiences in the business world.

“Racism is embedded,” said Braulio Colon of the Helios Education Foundation. “It’s embedded not only in the policies and rules and laws that make up our institutions, it’s also unfortunately embedded  in the hearts of individuals, most notable by those at the highest level of our society, those who oversee and lead our systems and those who fear that that equity equates to a loss of influence, wealth and power.”

Bemetra Simmons, an executive at United Way Suncoast, noted the wage gap makes it difficult for black residents to establish credit and make a downpayment on a home, a cornerstone for building generational wealth. Even those who do conquer that hurdle, face more when making a purchase.

“We’ve seen in the last 10 years, even the last five years, they have done studies on this. You can take mortgage applicants, that look the same income wise, debt to income, credit and they’re still higher paying rates, to the tune where the banks are being sued for doing such and having to pay penalties. So again, it’s not in our minds that we’re not on an equal playing field, even when on paper it’s supposed to be equal.”

She outlined specific steps that businesses can take to address inequities. These include developing affinity groups for minority employees, listening to their concerns, and rewarding company leaders who hire and mentor minorities.

“People tend to promote, mentor hire and advance people that look like them. When you have fewer women in there, you have fewer black folks, it’s going to be more difficult for you to move up the food chain, whether that be conscious, subconscious, it’s not always malicious. If we’re going to have success in the private sector, then we’re going to have to be willing not only to take a chance on someone who doesn’t look like us, but also give them the opportunity to grow into that position.”

Yvette Lewis, president of the Hillsborough NAACP, minced no words with the forum participants.