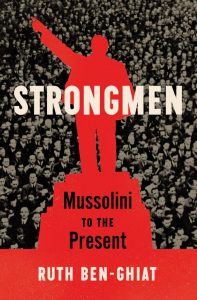 Used with permission from Ruth Ben-Ghiat

President Trump and his allies—including most of the top elected Republican officials in Florida are refusing to concede that Democrat Joe Biden has won the presidential election. The President is challenging some results in courts but so far the courts have dismissed his claims that there was widespread voter fraud.

President Trump has already told advisers he’s thinking about running for president again in 2024, two sources familiar with the conversations tell Axios.  Trump’s determination to cling to power – no matter what – has brought comparisons to strongmen in other countries both currently and in history.

Ruth Ben-Ghiat is an internationally known historian and professor at New York University. She’s written a new book that describes what strongmen leaders all have in common. The book is Strongmen: Mussolini To The Present.  Ruth Ben-Ghiat joins us now.