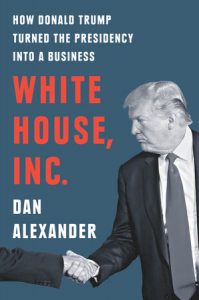 WHITE HOUSE, INC. How Donald Trump Turned the Presidency into a Business lasers in on the five-year period from Trump’s first days on the campaign trail in 2015 to the ramp up of his reelection bid in 2020. For the first time, readers can see how much money is flowing into Trump’s coffers, how much of that turns into profit for the president, and what it all means for American democracy.

Dan Alexander is a senior editor at Forbes, where he leads the magazine’s coverage of Donald Trump. Twice a year, he is responsible for putting together Forbes‘ estimate of Donald Trump’s net worth. Alexander’s reporting for Forbes has made an impact. His exposé on the Eric Trump Foundation prompted the New York attorney general to open an investigation into the organization, and his work on Commerce Secretary Wilbur Ross prompted additional inquiries. Dan Alexander joins WMNF’s Rob Lorei to talk about his new book.