Home Blog News and Public Affairs Radioactivity Wednesday: Is QAnon the future of the Republican Party? 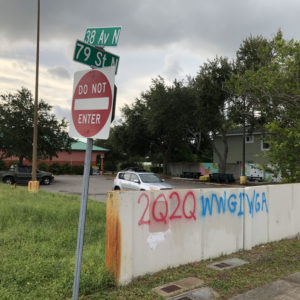 QAnon graffiti in St. Pete.  Photo taken Aug. 16, 2020, used by permission exclusive to WMNF. All other rights reserved by the photographer.

Good morning, welcome to Radioactivity. I’m Rob Lorei. The QAnon conspiracy theory has emerged during the last three years among defenders of President Trump. It says there is a worldwide cabal of Satan-worshiping pedophiles who rule the world, essentially, and they control everything.

According to Wikipedia: There is an alleged “deep state” against President Donald Trump and his supporters.[9] The theory began with an October 2017 post on the anonymous site 4chan by “Q“, who was presumably an American individual,[10] but probably became a group of people. Q claimed to have access to classified information involving the Trump administration and its opponents in the United States.

Q tells his followers that many liberal Hollywood actors, Democratic politicians, and high-ranking officials of being members of an international child sex trafficking ring. Q also claims that Trump feigned collusion with Russians to enlist Robert Mueller to join him in exposing the ring and preventing a coup d’état by Barack Obama, Hillary Clinton, and George Soros.  QAnon adherents believe there will eventually be a mass arrest of the people involved in the worldwide conspiracy.

In yesterday’s elections here in Florida—several congressional candidates on the Republican side had indicated support for QAnon. So far it appears that none of those candidates won their party’s nomination for the the congressional elections this fall – although one race is still very close.

We’re joined now by Jeet Heer who is the national affairs correspondent for the Nation magazine. In the latest issue he has a new piece called QANON is the future of the Republican Party.