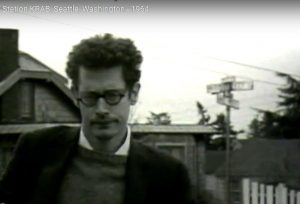 Lorenzo Milan
From the KRAB Archive

This month, at the age of 86, radio activist Lorenzo Milam passed away in Oaxaca, Mexico.

Milam was known as “The Johnny Appleseed of Community Radio” because he founded so many radio stations.  He was part of the second wave of community radio stations. The first wave was the founding of the very first non-commercial listener supported radio station in the country—Pacifica’s KPFA—which became a model for all of public broadcasting. KPFA was started by peace activists and intellectuals in northern California. Eventually the community radio movement reached many of the major cities in the country. Many in community radio went on to help establish and work for NPR stations. Today there is the low-powered FM radio movement—all inspired by Lorenzo Milam.

Lorenzo Milam was a visionary who also was disabled. He contracted polio when he was younger and for the rest of his life used either crutches or a wheelchair to get around. (All this month WMNF is recognizing the accomplishments of people who are disabled.) Later in life he became a disability rights activist.

Lorenzo Milam grew up listening to radio here in Florida.  He preferred black stations that featured characters like Daddy Rabbit with the ‘do right habit’, and Hank the “night watchman”.  He attended Yale and Haverford. Later, while studying at Berkeley, Milam discovered KPFA.  The intellectual content reminded him of the BBC.  He quickly got involved with the station. As one writer wrote, “One way to think of the stations that Milam went on to found is to imagine the highbrow radicalism of early Pacifica crossed with the lowbrow creativity of Hank and Daddy Rabbit.”

While in his 20’s, Milam pioneered his first radio station: KRAB.  It was founded in Seattle, Washington in 1961.  Three of the stations survived by Lorenzo Milam are WORT in Madison, WI, WERU in East Orland, Maine, and KBOO in Portland, OR. Milam also had a small role in the founding of WMNF.  He had a knack for using funny call letters – WAIF in Cincinnati and KCHU in Dallas for instance.

Lorenzo Milam was so influential his death this summer was marked by The New York Times, radio industry publications, Reason Magazine—the organ of the Libertarian movement and by Wade Rathke the founder of ACORN – the progressive community group.  On today’s show we listen to the words of Lorenzo Milam.