For a few days, beaches in Pinellas County were free of dead fish and that unmistakable irritation caused by toxins from red tide; but now it’s back. 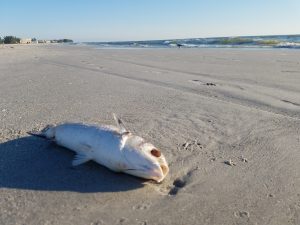 High concentrations of the cells that cause red tide were found Wednesday on all Pinellas beaches from North Redington Beach south to Pass-A-Grille Beach and even inside Boca Ciega Bay. Some of those beaches were plagued by strong odors and strong irritations, though most were clear of dead fish.

Ed Sherwood, the executive director of the Tampa Bay Estuary Program, says the red tide is back mainly because of on-shore winds and that he hopes cooler temperatures in the coming weeks will allow other algae to out-compete Karenia brevis.

“Right after Hurricane Michael passed there was some decrease in the cell counts that were observed. But over this past week it seems like with some on-shore winds that the cell counts have started to increase, particularly along the Pinellas County beaches. And up into Boca Ciega Bay and Tampa Bay as well.”

And that’s part of where you, as the Tampa Bay Estuary Program, you might be doing your own monitoring or be out on the water. What are the people in your group telling you about the symptoms that they’re experiencing or the water discoloration and other types of indications of red tide?

“Yeah, the initial results from this week’s testing are just coming in. So, they’re showing pretty high levels of Karenia brevis, the red tide alga responsible for a lot of the fish kills that we’re observing along the Florida coasts over this past summer and into the fall. So, we’re monitoring this increase in cell concentrations that’s starting to invade into the Bay.”

“There’s a couple of resources, mainly through the Fish & Wildlife Conservation Commission who report on the cell counts. But then there’s also another useful tool through the University of South Florida’s College of Marine Science, which kind of tracks the trajectory of these cells over time. And what it’s showing is with these on-shore winds they’re expecting these red tide cells to linger within the lower part of Tampa Bay and along the Pinellas County beaches.” 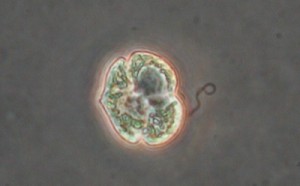 When you go to the beach you may not notice the tiny microscopic cells in the water. But you might see fish kills, you might notice irritation in your throat. What are some other things that people might be experiencing if they go to the beach this week?

“Yeah, definitely when the cell counts get that high there is some respiratory irritation for those sensitive to those conditions such as asthmatics or others that have pulmonary distress. So you definitely want to check a beach condition report before you go out to the beach to see what area might be having the most effects from those toxins getting into the air.”

“So, two great resources to look at are through Pinellas County if you go to VisitStPeteClearwater.com, they have a current beach condition report. So that’s a good resource if you’re going to a Pinellas County beach. Within Southwest Florida another great resource is through Mote Marine Laboratory. They also have a beach condition report that spans from Pasco all the way down to Naples. That website is VisitBeaches.org. And it will give you an indication of if folks are experiencing respiratory distress at any of these beaches along our coast.”

And finally, I want to talk about temperature. The air temperature has dropped maybe 7 or 8 degrees (Fahrenheit) in the afternoons this week. And over the weekend or early next week it’s expected to drop a little bit more. Is the expected cooler temperatures – could that help out with the red tide?

“Yeah, I’m hopeful that this change in season will spur response from other algal species. So, particularly other competing algae like diatoms that might out-compete the red tide algal cells – the Karenia brevis – from acquiring nutrients and appropriate amount of sunlight to keep their cell counts in these high concentrations.

“So, I’m hopeful that that change in season will prompt that. But it remains to be seen. This is typically the time of year where we see blooms of red tide offshore. And then through the spring and summer months they can be carried closer to the coasts. And that’s what we saw with this bloom this year. So, I’m hopeful that this change in season will hopefully prompt an ecological response that will hopefully dissipate this red time bloom.”

Is there anything else that you’d like to add?

“This red tide bloom highlights that we need to continue to be vigilant in activities that will reduce nutrients flowing into our coastal waters. The main ingredients that prompt these red tide blooms are nutrients – nitrogen and phosphorous – coming from our watersheds and going into the coastal oceans. And then also sunlight. So if you remove those nutrients from the coast as best we can through increased management practices hopefully that will decrease the fuel that’s contributing to these blooms in the future. So I think we need to take a long view in terms of how we manage our watersheds in the future and definitely invest in more restoration activities that will decrease our nutrient pollution in the future.”