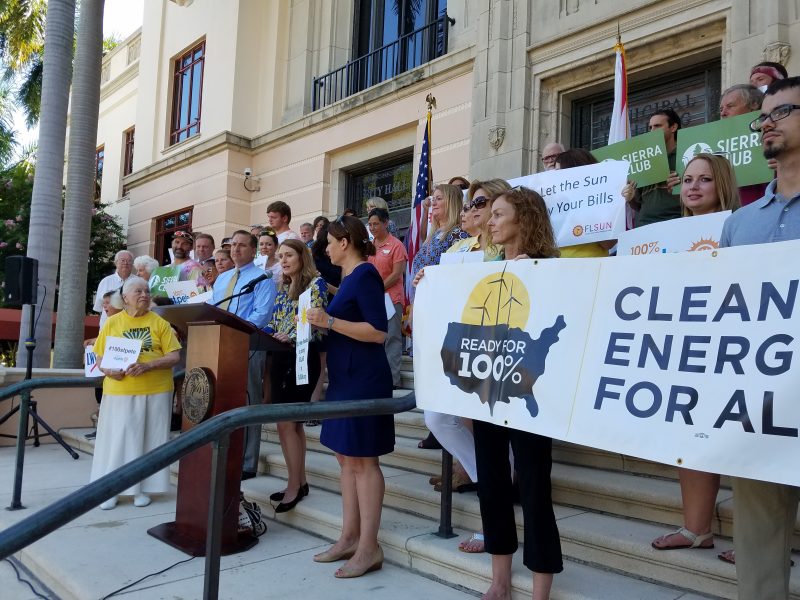 St. Petersburg recently became the first city in Florida to commit to 100% clean energy; on MidPoint we talk with members of the Suncoast Sierra Club about renewable energy. Emily Gorman and James Scott are co-campaign managers of the Suncoast Sierra Club’s Ready for 100% St. Pete campaign. A couple of weeks ago St. Petersburg City Council voted to go ahead with something that it’s been working on for a while. It will spend $250,000 of BP settlement funds to create an “Integrated Sustainability Action Plan” to chart a roadmap to 100% renewable energy. There are about twenty cities that are part of Sierra Club’s Ready for 100 national campaign; there will be a press conference Friday at 2:30 p.m. at St. Petersburg City Hall. University of South Florida St. Petersburg has recently completed its Climate Action Plan and will unveil it Friday as well.

Listen to the show:

The city will also use BP settlement funds for related expenses: $250,000 for an energy efficiency audit & energy retrofits of City facilities and $300,000 for modeling future risks like hurricanes and sea-level rise.

The 100% renewables pledge will apply not just to energy used by the municipality — it also includes all the residences and businesses in the city limits.

Gorman and Scott say the 100% renewable energy goal will lead to more jobs and cleaner air and water.

Some critics have said that instead of using funds from the BP Settlement for these studies, the money should be used instead on infrastructure, especially sewer / wastewater.

Watch the end of the show here:

At the beginning of the show we played a comment left by a listener after our last show: the guest, Susan Smith, president of the Democratic Progressive Caucus of Florida spoke about public education and about her opposition to Donald Trump’s pick for education secretary.