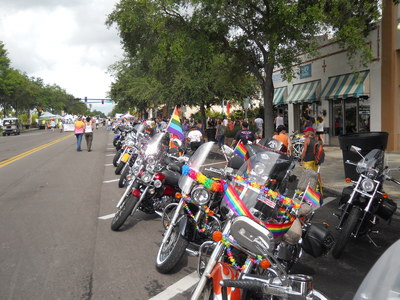 One of the largest gay pride celebrations in the south happens this weekend in St. Petersburg, Florida. So, what are plans for St. Pete Pride and what are the security concerns? To find out, WMNF News spoke with its executive director, Eric Skains.

“Well, St. Pete Pride, the organization, is the producer of the annual St. Pete Pride Weekend. So, we coordinate the events, such as the festival, the parade and various other events throughout the weekend at the end of June.”

And the plans for St. Pete Pride, this month–especially in light of the Orlando massacre–how will those plans be the same or different from previous years?

“They’ll be very similar to previous years, as far as security is concerned. Ever since the Boston Bombing, every event throughout the nation reevaluated their security control plan. So, this year, we’re just ensuring that everything is in place–all the T’s are crossed and I’s are dotted–that everyone is familiar with it. Just reiterating this plan–we’re not going to be reinventing anything–but, we are going to be adding a few aspects to the event, as far as security is concerned. Since it is so close to–what’s kind of in our back yard–and what’s so close as far as timing, but, more so just reiterating what we have and ensuring that everybody is on the same page.”

What kinds of security measures will you be adding?

“That’s to be determined. We’re officially meeting with the City on Thursday and they’re going to go over everything that we currently do. We’ll brainstorm, as far was what still needs to be added and taken away, at that time.”

What’s a typical crowd size for your event and are you expecting more or fewer people, in light of what happened in Orlando?

“We typically get over about 250,000 people that attend the 3-day event–so that’s combined attendance. We anticipate–as far as what we’ve seen so far–is the amount of support and willingness to come out and represent the community has just been astonishing. So, I think this year we’ll have a larger crowd than what we’ve typically had–a lot of people wanting to come out. It is the first LGBT event in Florida–large scale event in Florida–since the Orlando shooting. So, it’s an opportunity for everybody, throughout the entire state of Florida, to come in and celebrate the lives of those who were lost.”

Have you had protesters in the past or in the past have there been indicators of violence or since the Orlando shooting, have you had any indications of people who might be violent?

“We haven’t had any indications of people that are wanting to show violence towards the event. Every year we have protesters, we have quite a few religious groups who do come out and protest the event. That’s expected to happen again, we don’t anticipate anything different. But, I don’t think anyone has reached out, as far as threatening to do any type of violence at the event. If they have, they haven’t reached out to us. I think if there were a case–much as we saw in Los Angeles, our police department here is fully equipped to handle such things.”

The meeting this Thursday with the City, is that open to the public?

“It is open to members of the media as well as representatives of all the areas that St. Pete Pride affects. So, The Grand Central Business District Association that’s in one neighborhood, the surrounding neighborhoods as well are all asked to send representatives, just to ask questions that they’re hearing from their respective residents or businesses. And it’s just sort of a Q&A with the police department to ensure what is the security control plan–at least as much as what they’re able to reveal and reassure everyone that the police department and the City is on top of everything.”

Those are my only questions. Is there anything else that our listeners should know about this issue?

“Everything that we have, whenever people send us updates where there’s vigils or where there’s counseling or areas to donate, all of that’s available online stpetepride.com.”

Pride kicks off Friday night at a major league baseball game: Pride Night with the Rays. The team announced today that proceeds from all new ticket sales would go to the Pulse Victims Fund.