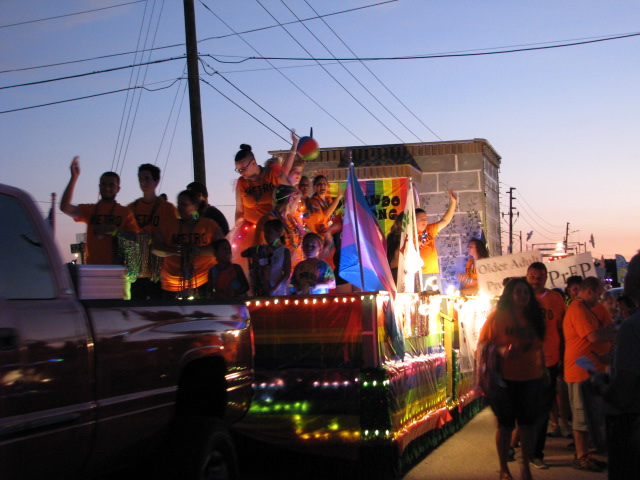 This weekend is one of the largest gay pride events in the south: St. Pete Pride. Organizers expect hundreds of thousands of people to converge on St. Petersburg.

Here is a link to previous WMNF stories about St. Pete Pride.

“St. Pete Pride is an event that brings, over the weekend, about a quarter of a million people into St. Petersburg. It’ll happen throughout the city. On Friday and Saturday, it’ll be in downtown in St. Pete along the waterfront with a parade route on Saturday going from Vinoy Park down to Albert Whitted Park. There will be music all day long, starting at 2:00 p.m. with parades kicking off at 6:00 p.m. and a fireworks display at 9:45 p.m. Then we will have, on Friday, prior to that, we’ll our kickoff concert party in Straub Park as well and that’ll run from 7:00 p.m. until 9:00 p.m. and both of those events are free. Then on Sunday, we’ll be in the Grand Central District for our street festival, which will run from 9:00 p.m. until 4:00 p.m., where we’ll have over 350 exhibitors, mostly small businesses and non-profit organizations from here, within the community.”

Until this year, most of the events had been in the Grand Central District, but, now you’re moving a lot of the big ones to the waterfront. Why that change?

“So, it was a multiple pronged reason as far as moving it downtown for the parade. It is our largest event, which has the largest, as far as attention is paid to it, that the waterfront location is logistically an easier area to secure; there’s some cost savings in doing that as well and it allows us to expand the event in offering multiple activities along the parade route that we’ve never been able to do before. So, we’ll see that this year, with our Celebration Zone, which will have a stage that will be running all day long; several food vendors that people will have access to, both prior and during the parade. That will be a new aspect to the event.”

“It’s not a separate event, it is part of the parade, it is what kicks off our St. Pete Pride Parade. It is the very first Trans-Pride March in the state of Florida and we are extremely excited about it because it’s an opportunity for us to highlight and for us to show attention to the trans-community and the issues that they’re facing. It’s an opportunity to incorporate the trans-community into our parade and have a much larger presence. It’ll start at 6:00 p.m. and that will be running from Albert Whitted Park to Vinoy, where it will meet the rest of the lineup for the parade.”

Is there anything else our listeners should know about Pride this weekend?

“All information on the events can be found at stpetepride.com. There are several options for people to get to the parade. There will be a free Park-n-Ride from St. Pete High that will be running from 12 noon until midnight as well as several options with the Central Avenue Trolley that’ll be running until 2:30 in the morning, specifically for the parade.”