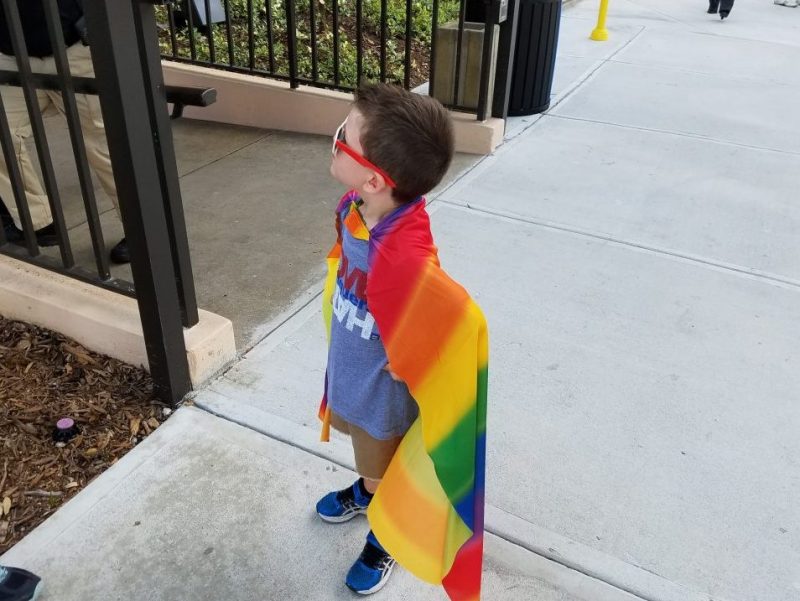 Organizers expect about a quarter of a million people this weekend at St. Pete Pride; and because of the recent mass shooting at an Orlando gay nightclub, organizers believe there will be an outpouring of support as well as beefed-up security.

St. Petersburg Mayor Rick Kriseman says some groups who haven’t participated in Pride in previous years could join this year.

“Yeah, I think you’re going to see folks that come here that haven’t necessarily been here in the past, that do come out for that reason. Certainly, we want to encourage people to come out. If you stay away because of what happens, then you’re allowing what happened and the terrorist action that this individual took, to win. And we can’t let that happen.”

Kriseman says there will be more security than in the past.

During a ceremony Thursday morning Kriseman oversaw the rainbow pride flag being raised over City Hall. He also called out elected leaders for their inaction on gun laws.

“Forty-nine people, most of whom were gay or lesbian, were gunned down by a hateful and deranged man. Dozens more, seriously injured. And I’m going to resist the temptation to make today about guns, but, I can assure you, as long as I am your mayor, I will speak out against the embarrassment that is our national and state gun laws.”

“Will you uproot the hate or will you continue to nourish it? Will you say this is enough or will you let those jokes, those comments, the inaction of elected leaders — I can’t tell you how deep the insult is, that we have a legislature that failed to pass a state law that simply says you can’t discriminate, based on sexual orientation and gender identity, when it comes to employment, housing, and public accommodations and yet, pass something called the “Pastor Protection Act.” I think it’s pretty clear right now, who needs protecting.”

Smith says a lasting memorial to the Orlando victims will be to end the normalization of hatred towards LGBT people.

St. Petersburg City Council member Darden Rice agrees with the police chief’s suggestion that people will be safer if they don’t bring guns.

“He did strongly suggest that bringing concealed weapons is maybe not such a great idea. It’s dark, it’s crowded, there will be drinking. A shoot-out, in those circumstances, doesn’t make sense.

“There’s gonna be plenty of people out there, uniformed and un-uniformed and it’s not the time for vigilantes or people to go rogue, no matter how well-intentioned you think it is. Let’s use some common sense, right?” 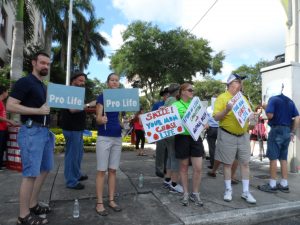 About a dozen anti-abortion activists quietly protested at the pride flag-raising ceremony. Scott Mahurin, president of Florida Preborn Rescue, says that in the spirit of diversity and inclusion Mayor Kriseman should also send their light blue flag with the letters spelling ‘pro life’ up the flagpole.

“We’re here to speak for the pro-life community in St. Petersburg. We’ve asked the Mayor to raise our flag as a symbol of diversity and respect, to all different faiths in communities and he’s refused to do that over the last two-years. So, we’re here.

“We heard he was going to raise the gay pride flag today and so we decided to come and peacefully and quietly protest and ask if he would consider raising our flag too, in the spirit of diversity.”

Mahurin says the group does not plan to protest at the pride parade. The Pride Parade is Saturday beginning at 5:00 p.m.