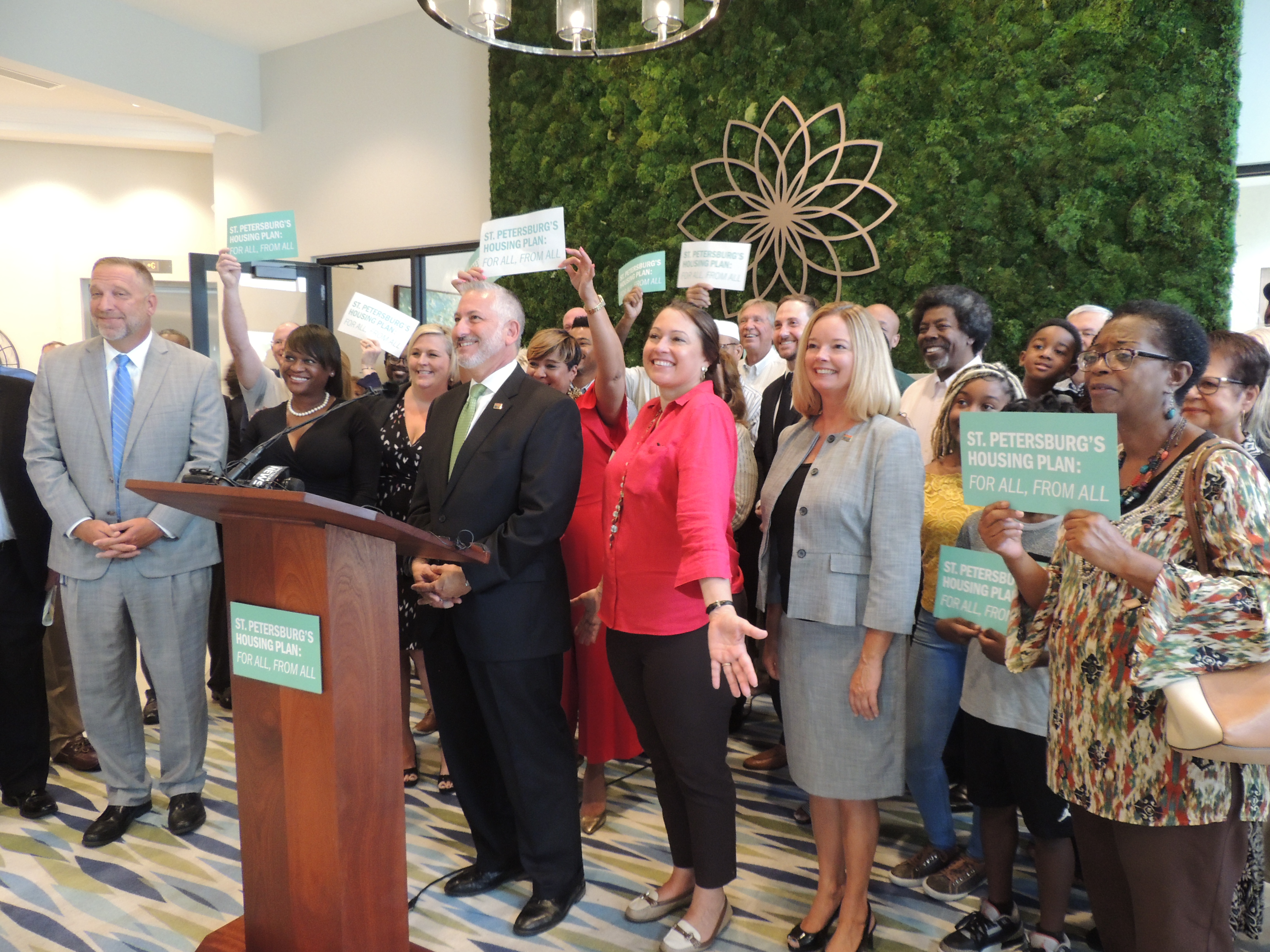 On Wednesday the City of St. Petersburg announced a ten-year plan to increase the availability of affordable and workforce housing; Mayor Rick Kriseman unveiled the plan during a press conference in a newly-constructed apartment building in the Historic Kenwood neighborhood.

“Our plan, if not the many details, is simple. Housing for all from all. It’s a ten year plan that expands existing programs and introduces new solutions.

“The plan will begin in 2020, and will be funded through various public and private sources. And we believe the plan will impact approximately 7,000 households, improving life for approximately 19,000 of our current residents, and those expiring to become residents. Single income families, retirees, first responders, teachers.”

Mayor Kriseman spoke in the lobby of the affordable housing complex built by the developer Green Mills Group.

City Council member Amy Foster says housing affordability is an emotional issue because, as she put it, ‘housing is a human right.’

“And why? Because we have over four thousand children who have nowhere to live right here in Pinellas County. We have nurses; we have police officers; we have single moms; we have teachers, who can’t afford to live in our communities.

“So I am excited to stand beside the Mayor as he announces this plan today. And, I hope that everyone will get behind this. We do need more neighborhoods to support developments like this.

“When I ran for office six years ago, my district was not excited for Green Mills to come into the community. And Mitch, and Oscar, and Green Mills worked really hard to earn trust and respect, and to work with the neighborhood. And now, just last week, I posted an article about an Altis Cardinal development right across the street. Every single comment said, ‘But what about affordable? We want more affordable in our backyard.’ So, that really shows how really palatable this topic is, and how much things have changed.”

According to a release from St. Petersburg, the housing affordability plan would help low- and moderate-income households by creating and preserving 2,400 multi-family housing units among other options.

Rob Gerdes, the city’s neighborhood affairs administrator, said some new funding sources would be considered including $20 million from what’s called a ‘linkage fee’ – a proposed impact fee paid by developers on new market-rate construction. This is pending the city’s ‘nexus study’ which won’t be complete until September. He also spoke about a ‘FAR bonus.’ That’s a fee paid by developers for the right to build more square footage on a property.

“And really what’s new is synthesizing all the work that we’ve been doing, and putting it into a 10-year plan, and setting goal numbers that go with it.

“So, for example, the mayor’s making news today by saying we’re going to double the amount of multi-family units over the next 10 years, that we’ve done the previous 10 years. So that is new today.

“On the funding side, certainly the FAR bonus is new information. The planning department has been working on this. Over the previous 10 years, we’ve received about $40,000 from that FAR bonus. So, not a very significant amount of money.

“We’re anticipating, with the changes, $2.5 million over the next 10 years. So that’s significant news.

“And also, the announcement on the linkage fee that the mayor is open to that and working through that. That would be brand new funding for affordable housing.”