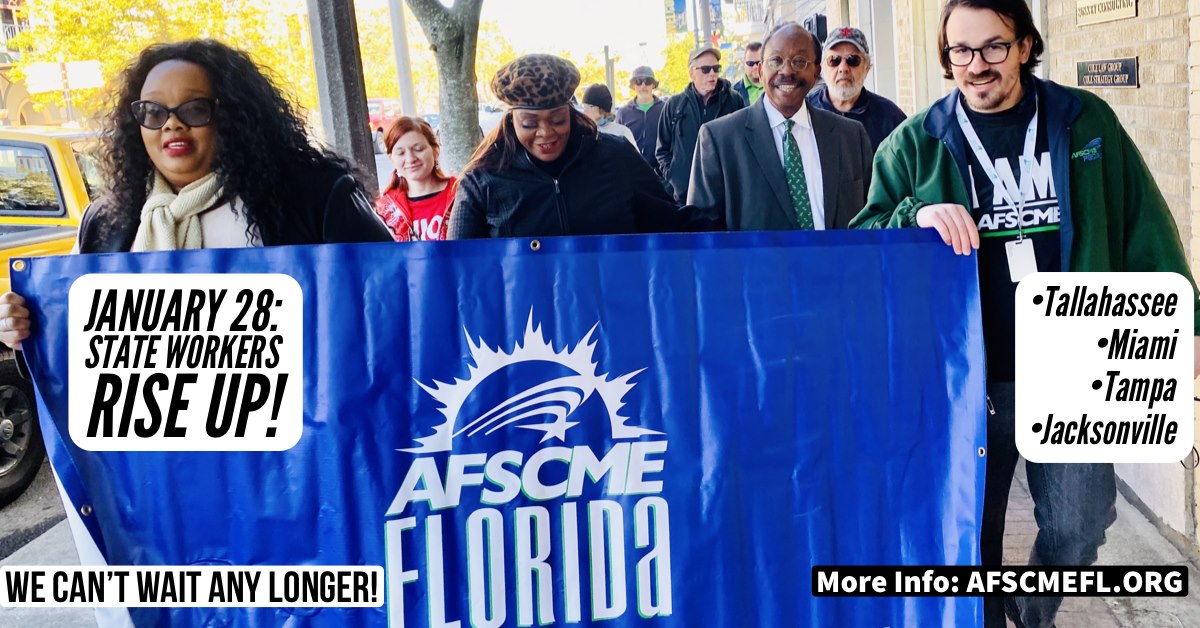 Later in this program we’ll hear how listeners responded to our program yesterday about impeachment yesterday.

According to the web site Fact check wages for all private sector workers rose 2.5% (in inflation adjusted numbers) during President Trump’s first 35 months in office. That’s compared to what happened to workers in the eight years of President Obama– real weekly earnings rose by 4% for all workers.

As the economic recovery continues from the Great recession—which took place from about 2007-2009—some workers in Florida have been left behind. State workers.

Under the eight years of former Governor Rick Scott and the Republican controlled legislature there were very few pay increases for state workers.

State workers are rallying next  Tuesday January 28 in several cities across Florida including Tampa (and the State Capitol) to bring attention to their call for raises in the 2020 State budget—the budget the legislature is working on now in Tallahassee.

We’re joined now by a state worker who is on her break—Veronica Contigiani is President of AFSCME local 3104 and works as an auditor for the state.

Background from the state workers union:

AS IMPASSE ON DRAGS ON, HUNDREDS OF STATE WORKERS TO RALLY IN TAMPA AND ACROSS FLORIDA DEMANDING LIVING WAGES

Underpaid and overworked state employees in four cities across Florida will hold simultaneous rallies at worksites and the State Capitol on Tuesday, January 28 calling for Governor DeSantis and the Florida Legislature to prioritize them in the 2020 budget. The plight of struggling state employees in Florida has now reached crisis level status with many employees working two or three jobs or relying on public assistance just to survive.

“We are being cheated,” said Veronica Contigiani, a tax auditor with the Florida Department of Revenue and President of AFSCME Local 3104. “We can not afford another year without a raise. Period” Contigiani and thousands other members of AFSCME Florida are planning what is expected to be the largest multi-city state employee rally in state history. Tampa’s rally will take place Tuesday at 11:30AM at the Florida DCF Office: 9393 N. Florida Ave.

Our dedicated state workers do the crucial work of keeping our children safe, protecting our environment, and keeping our infrastructure functioning. Yet, despite a strong economy and a booming population, Florida’s nearly 50,000 state employees are some of the lowest paid in the entire nation. After years of downsizing, budget cuts, and eviscerated state services, state workers are fighting back.

An official impasse was declared between state workers and the State of Florida on Monday, November 18, 2019. State employees previously requested a 5% across the board pay increase and a 2% Cost of Living Allowance at bargaining on November 8. Florida’s $37 payroll expenditure per State resident is 55.4% below the national average of $83.

After Governor DeSantis announced he will raise the minimum starting salary for Florida teachers to $47,500, state workers, many of whom make far less, are calling on DeSantis to recognize them. “I have co-workers that do brutal work, they get kicked and punched in the course of their job and then to come home and have to stress about which bills you can afford to pay…it’s sickening.” said Tallulah Thomas, a Behavioral Program Specialist at Chattahoochee State Hospital. “It’s high time for a raise.”

State workers do essential work to keep our communities functioning and safe and many work in dangerous conditions. We are calling on Governor DeSantis and the State Legislature to recognize that and prioritize workers in the 2020 budget. So far, the State Budget has offered nothing for 50,000 state workers.

Representing 100,000 workers across the Sunshine State, the hardworking men and women of AFSCME make Florida happen every day. One of the state’s fastest growing unions, we stand for excellence, prosperity and dignity through public service. WEB: www.afscmefl.org / FACEBOOK: AFSCMEFlorida / TWITTER: @AFSCMEFL

In the most recent 12 months, ending in December, the CPI rose 2.3%. The CPI rose an average of 1.8% each year of the Obama presidency (measured as the 12-month change ending each January), and an average of 2.4% during each of George W. Bush’s years.

The average weekly earnings of all private-sector workers, in “real” (inflation-adjusted) terms, rose 2.5% during Trump’s first 35 months (ending in December).

Those figures include managers and supervisors. Rank-and-file production and nonsupervisory workers (82% of all workers) are doing just a bit better than their bosses. Real earnings for them have gone up 2.6% so far under Trump.

Those gains extend a long trend. Real wages took a dive during the Great Recession of 2007-2009, but have been rising now since hitting a low point in July 2008. During the Obama years, real weekly earnings rose 4% for all workers, and 4.2% for rank-and-file.Source: https://www.factcheck.org/2020/01/trumps-numbers-january-2020-update/