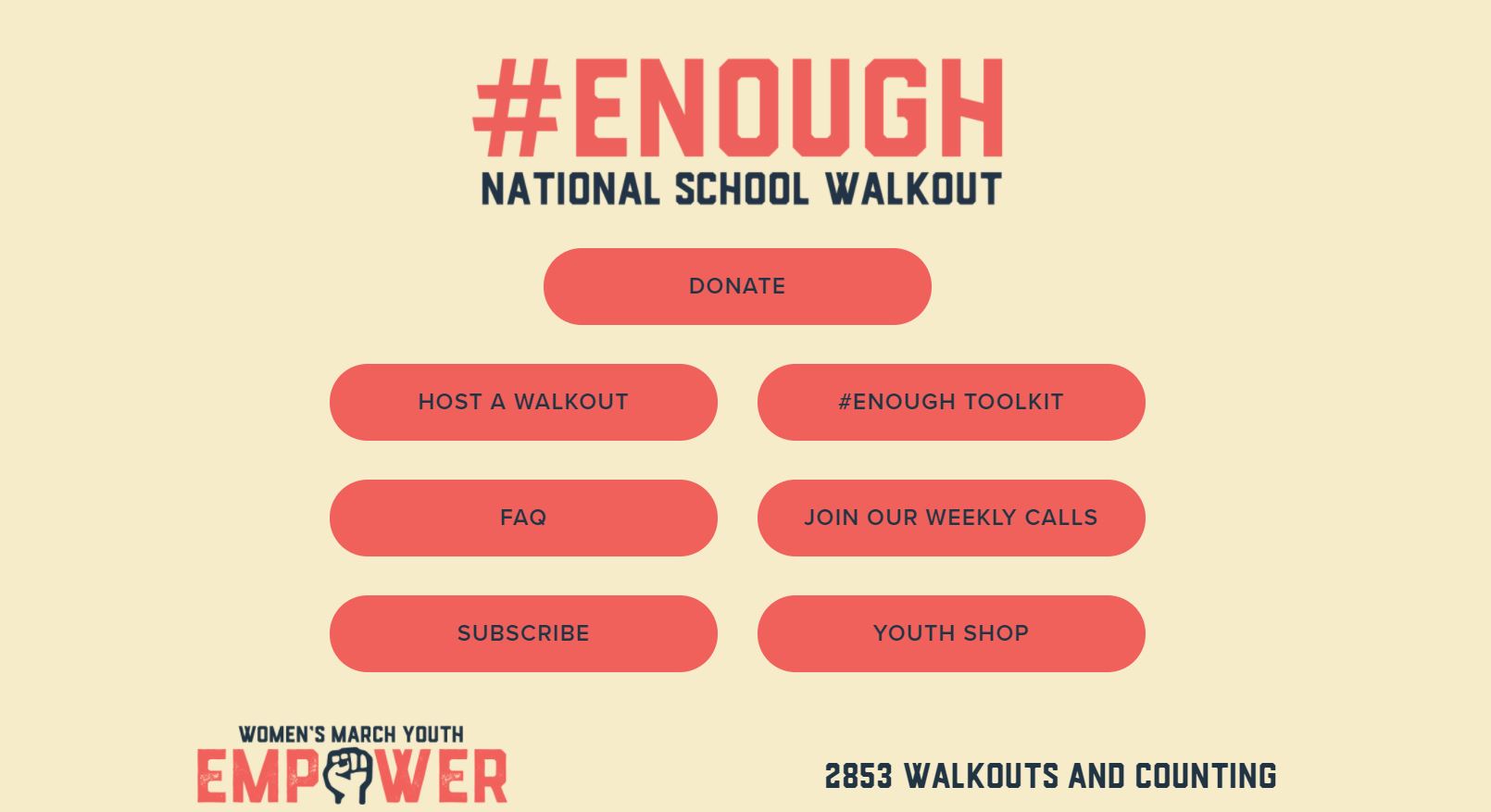 From Maine to Hawaii, thousands of students planned to stage walkouts Wednesday to protest gun violence, one month after the deadly shooting inside a high school in Parkland, Florida.

Organizers say nearly 3,000 walkouts are set in the biggest demonstration yet of the student activism that has emerged following the massacre of 17 people at Marjory Stoneman Douglas High School.

Students from the elementary to college level are taking up the call in a variety of ways. Some planned roadside rallies to honor shooting victims and protest violence. Others were to hold demonstrations in school gyms or on football fields. In Massachusetts and Ohio, students said they’ll head to the statehouse to lobby for new gun regulations.

The coordinated walkout was organized by Empower, the youth wing of the Women’s March, which brought thousands to Washington, D.C., last year. The group urged students to leave class at 10 a.m. local time for 17 minutes — one minute for each victim in the Florida shooting.

Although the group wanted students to shape protests on their own, it also offered them a list of demands for lawmakers, including a ban on assault weapons and mandatory background checks for all gun sales.

“Our elected officials must do more than tweet thoughts and prayers in response to this violence,” the group said on its website.

It’s one of several protests planned for coming weeks. The March for Our Lives rally for school safety is expected to draw hundreds of thousands to the nation’s capital on March 24, its organizers said. And another round of school walkouts is planned for April 20, the 19th-year anniversary of the Columbine High School shooting in Colorado.

School systems in the Tampa Bay region have pledged to cooperate and not punish students for the protest.

The planned protests have drawn mixed reactions from school administrators. While some applaud students for taking a stand, others threatened discipline. Districts in Sayreville, New Jersey, and Maryland’s Harford County drew criticism this week when they said students could face punishment for leaving class.
In a letter threatening disciplinary action, a Georgia school system cited concerns about confrontations between students over gun rights.

“If some students wish to use the time to protest guns in schools, others may feel strongly otherwise, and confrontations could ensue,” Whitfield County Schools Superintendent Judy Gilreath wrote to parents and students.

Other schools sought a middle ground, offering “teach-ins” or group discussions on gun violence. Some worked with students to arrange protests in safe locations on campus. Officials at Boston Public Schools said they arranged a day of observance Wednesday with a variety of activities “to provide healthy and safe opportunities for students to express their views, feelings and concerns.” Students who don’t want to participate could bring a note from a parent to opt out.

Meanwhile, free speech advocates geared up for a battle. The American Civil Liberties Union issued advice for students who walk out, saying schools can’t legally punish them more harshly because of the political nature of their message. In Pennsylvania, Wisconsin and Texas, some lawyers said they will provide free legal help to students who are punished.
___

A prominent Republican donor says he is among those launching a new group aiming to pressure Congress to enact what he calls reasonable gun legislation.
Florida real estate developer Al Hoffman Jr. says more details will be released about the group called “Americans for Gun Safety Now” after the planned March 24 rally in Washington, D.C., by survivors of last month’s school massacre in Florida.

Hoffman says the group is pushing six gun-reform goals that include changes signed into Florida state law by Gov. Rick Scott. That law bans bump stocks and raises the minimum age to buy a rifle from 18 to 21. Hoffman also confirmed to The Associated Press Monday that he no longer supports groups opposing assault weapons ban. He made those remarks earlier to the New York Times.