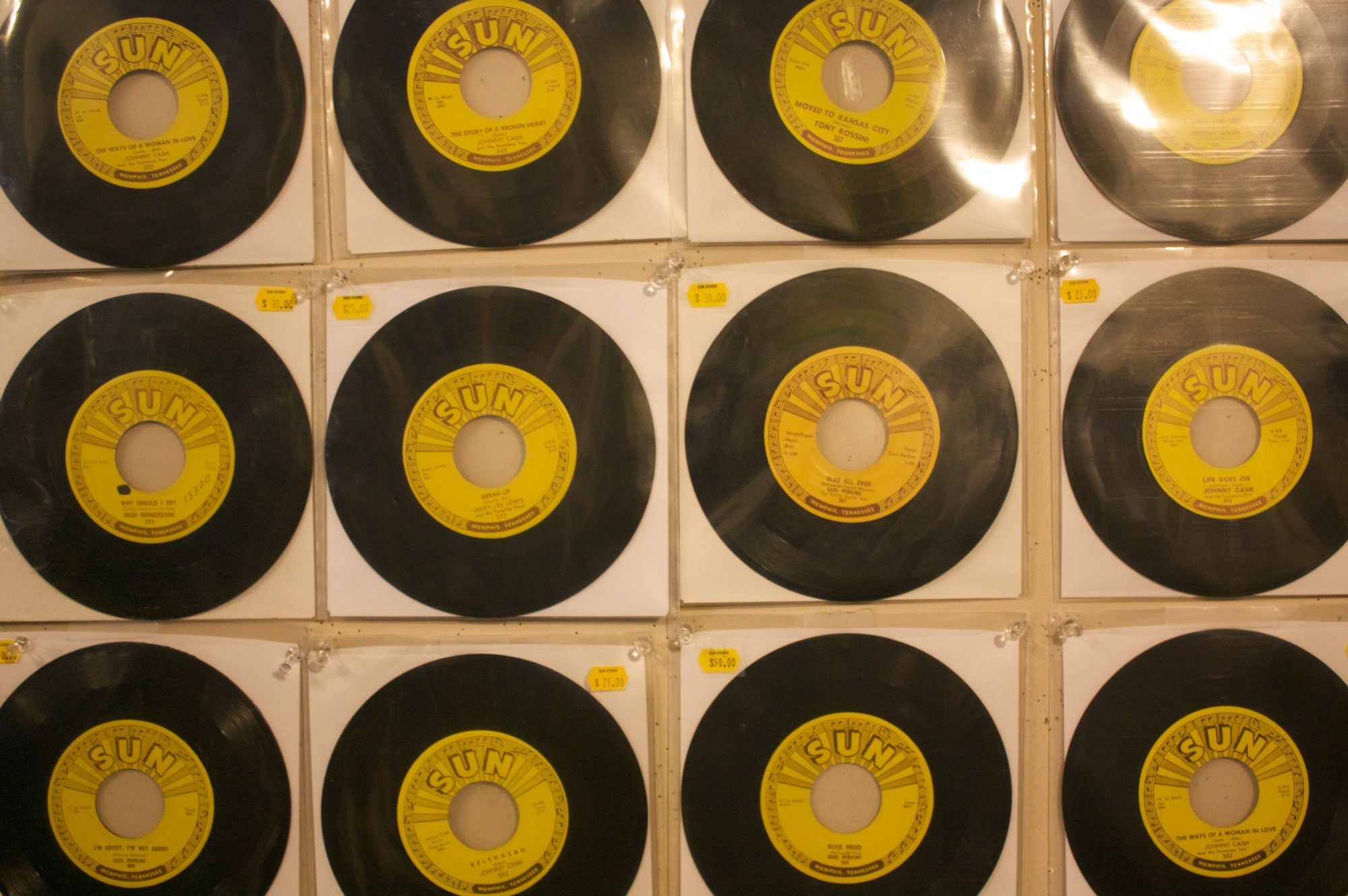 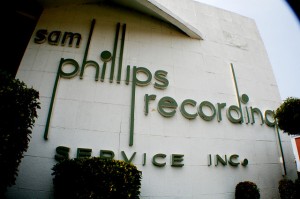 Step in my Rocket, don’t be late
‘Cause we’re pulling out about half past eight
Go around the corner gonna get a fill
Everybody in my car’s gonna take a little nip
Move on out, movin’ and cruisin’ along
Here we go, here we go…

You can feel the songs as much as hear them, feel them propelling you forward. Maybe to the dance floor, maybe down the road. This song and others recorded at Sam Phillips’ Sun Studio, and (some) released on Sun Records, jived and jump-started rock’n’roll. Sam Phillips had been deep in the blues scene, recording for different labels (mainly Chess and Modern Records) and at Muscle Shoals, all the variations of the blues. As 1950 dawned, Phillips opened the Memphis Recording Service, wanting to record musicians, especially the thrilling black musician-led blues scene, but ready to record anything (weddings, gospel choirs, and anyone who walked through the door).

A 19 year old Isiah Turner came barreling down the road with his Rhythm Kings, and he (Ike, uncredited) and singer Jackie Brenston wrote Rocket 88 to celebrate the powerful Oldsmobile of that name. Two versions of the song, based on an older song (Cadillac Boogie) was recorded at the what would become Sun Studios, and released on Chess Records. Ike’s version, with the Rhythm Kings didn’t do as well as Jackie’s (the same band was billed as his Delta Cats). The Jackie Brenston was the #2 single on the R&B charts.

Popular music was changing. Whether it was the post-WWII energy; the rapid rise of cars (therefore car radios) and the culture growing around them; the march towards integration or a combination of all three, Sun Studios and then Sun Records stepped on the gas and got America there fast.

Phillips started the Sun Records label to go with his studio, signing local dj Rufus Thomas; bluesmen BB King, Joe Hill Louis, Rosco Gordon; and the first punk rockers–Jerry Lee Lewis, Johnny Cash, Roy Orbison, Carl Perkins and so many more. The raw sound he espoused in the recordings gave an authenticity opposite of the slick production in the top hits of the day (You Belong to Me, Third Man Theme, Mona Lisa, Auf Wiederseh’n Sweetheart).

Sam Phillips, according to his biographer Peter Guralnick,  was a progressive, who realized that the blues and juke music he so loved would never reach the mainstream audience without having both black and white musicians recording and releasing it.

“More than merely creating a sound, Phillips initiated a sensibility… Working in Memphis in the 1950s, he preached the value of self-belief and ‘individualism in the extreme’ to both country and blues performers, encouraging artists not to polish their sound.”

“With Sun Records and the recording studios he owned, Phillips created a progressive oasis in heavily segregated Memphis,” the statement added. “He worked to challenge the cultural assumptions of the day, blur color lines, and instigate needed social change. The result was a straightforward and soulful sound that helped develop rock & roll out of a country-blues mix. Musical integration eventually undermined barriers of racial segregation and discrimination as the Civil Rights movement gathered force.”

Not above using showman’s tactics, Phillips recorded and released a hit single, Just Walking in the Rain, by The Prisonaires, who were as their name states, prisoners incarcerated in the state penitentiary, whom he had escorted by armed guards back and forth to the recording studio. Legend has it that an article about the group caught a young Elvis Presley’s eye, and he came to Sun Studio to record a demo. Nothing much came of the demos he recorded, but he stuck in Phillips’ ear, and Phillips was on the watch for the right material for him. Elvis was brought back into the studio in July 1954, and while goofing around between takes, he sang Arthur Crudup’s That’s Alright Mama (which borrowed from a Blind Lemon Jefferson tune).

According to our friend Wikipedia: Upon finishing the recording session, according to Scotty Moore, Bill Black (Elvis’s bandmates) remarked,

“Damn. Get that on the radio and they’ll run us out of town.”

Phenomenons like Elvis Presley don’t happen that often, and Phillips was smart enough to know that eventually he wasn’t going to be able to promote Elvis as he ought to. Another local dj, Colonel Tom Parker, got involved. 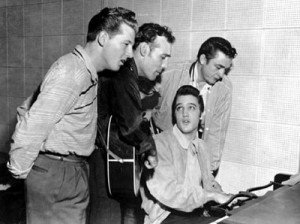 Elvis’s contract was put up to bid for an unheard of sum (for a regional artist) for $35,000, and RCA bit. Sun Records was saved, and Elvis was given a national stage. In less than two years he was a star, appearing to a huge audiences on TV, making his first movie, and starting riots (presumably unintentionally). He was back in Memphis in early December, 1956, when he stopped by Sun Studios to see Carl Perkins record, with Jerry Lee Lewis on the organ, and Johnny Cash, who was hanging out. The four men who changed the sound of music, titans.

At that same time though, Sun Records was being sued for a back breaking amount. Phillips had written an answer song to Big Mama Thornton’s Hound Dog, called Bear Cat, sung by Rufus Thomas. It was one of several answer songs, and the biggest hit of all of them. Unfortunately, Phillips ripped off the same music and chords from Hound Dog, and lost his legal battle over it. The money made from selling Elvis’s contract didn’t just help promote other Sun artists, it also kept the doors open after losing the lawsuit.

Gotta love the meeeeooooooooow at the beginning:

I keep a close watch on this heart of mine
I keep my eyes wide open all the time
I keep the ends out for the tie that binds
Because you’re mine, I walk the line

Johnny Cash took all of the pain and glory from his early gospel singing and poured it into everything he did. His baritone knew every dark moment, and found light, often, but not always. He recorded at Sun for a couple of years, but grew frustrated over Phillips’ focus on Jerry Lee Lewis, and the prohibition on recording gospel. He left after recording his first number one hits, not feeling the %3 commission offered by Sun, as opposed to the industry standard of %5.

At the same time, Jerry Lee Lewis’s finally had a huge hit, A Whole Lotta Shakin’ Goin’ On, fired up those car radios and the dance floors, and propelled The Killer to stardom.  Rob Oribson, Conway Twitty, and many others were recording and being released by Sun.

Sam Phillips grew bored with recording and records, and started buying up radio stations, and capitalizing in on his early investment in hotel chains. By the mid 60s Sun wasn’t doing too much exciting stuff anymore, and was sold in 1969 to Mercury Records. The label primarily functions as a reissue one, and the studios are open once again at their original location in Memphis as a recording studio and historic landmark.

Hope to see you at WMNF’s Rockabilly Ruckus – Tribute to Sun Records! It will be a blast!