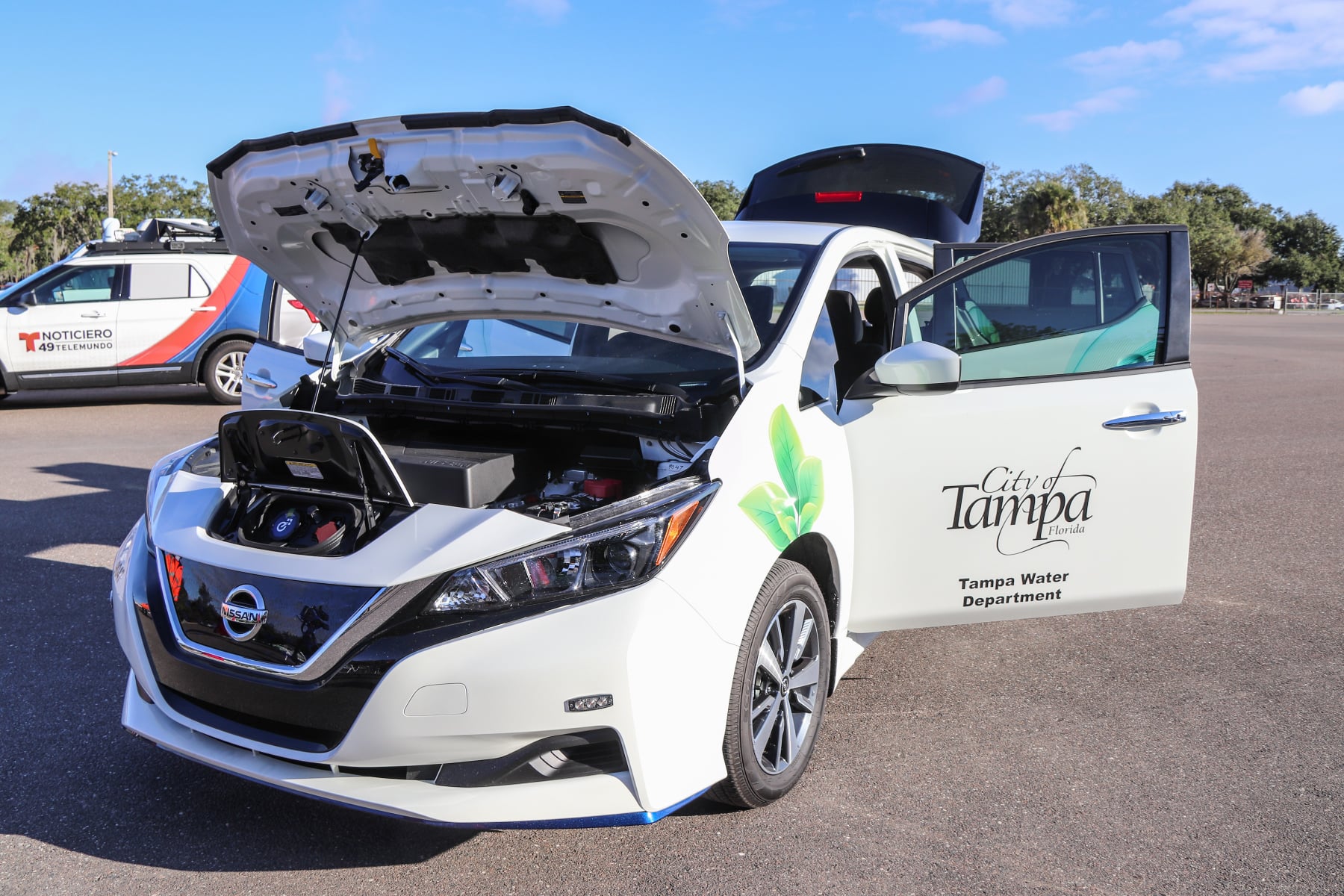 On Tuesday, the City of Tampa held a news conference introducing nine new electric vehicles to its fleet. Mayor Jane Castor said it’s part of the city’s commitment to sustainability and goal of one day having an all-electric fleet.

Like a football team rushing the field from the locker room, Castor drove one of the City’s new Nissan Leaf’s through a “Breath Clean, Tampa’s Green” banner as Marcia Griffiths’s Electric Boogie kicked off in the background.

But the mayor stopped short of performing any tactical maneuvers.

“I used to be a driving instructor out here on this pad so the staff is trying to get me all amped up to do a couple J-Turns or some pits out here,” she said. “But I’ll try to keep it a little more reserved.”

The nine Leafs will be split among Tampa’s Water Department and Construction Services. Sal Ruggiero, deputy administrator of Infrastructure Services, said he’s been assigned one of the vehicles and has been impressed with its performance. The City plans to add more in coming years.

“I’m telling you the technology is outstanding. We’re very happy with these vehicles and the plan is to add more in the future.”

The electric vehicles join Tampa’s 90 compressed natural-gas powered garbage trucks and more than 90 hybrid vehicles as Castor pushes her “Transforming Tampa’s Tomorrow” initiative to get the city more green. The vehicles cost the city $35,000 each.

Castor said the sticker price of the vehicles is high, but will save the city in the long run. Mainteenance costs will be lower and the vehicles will last longer gas-powered cars.

“It really is a benefit financially and it’s a saving to our tax payers,” she said. “And we always look to be good stewards of the tax dollars.”

According to a September Consumer Reports analysis, pure electric vehicles can save owners nearly $5,000 during a vehicles life. And that doesn’t factor in gas savings or environmental impact.

The City plans to add 10 electric vehicles a year. The ultimate goal is to replace all of the city’s 3,300 vehicle fleet with electric options. Ruggiero said technology and market availability will determine if that’s possible.

Tampa’s move echoes that of other local agencies. The Hillsborough Area Regional Transit Authority is planning to have four electric busses on the road by 2022. The Pinellas Suncoast Transit Authority already has electric vehicles and plans to invest millions more into its electric infrastructure.

“We really are excited about this. This is one more step in transforming Tampa’s tomorrow with these electric vehicles.”

Castor said she hopes Tampa will one day have electric garbage trucks and looks to add electric pickup trucks in the near future. She’d also like to see the City’s police fleet replaced with hybrid vehicles.