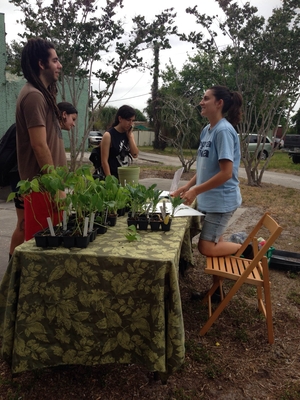 To commemorate May Day, about 50 community activists gathered at Voice of Freedom Park in West Tampa Thursday night. They held a “free market” and potluck, welcoming all members of the community. But at the last minute, it was almost canceled when the hosts were notified by the police and the city that they required a permit.

Voice of Freedom Park, owned by Joe Redner, is where Occupy Tampa relocated after spending weeks on a downtown Tampa sidewalk. Since the park is private property, it has hosted rallies and protests. The organizers, including Gil huddled on the sidewalk hoping for the rain clouds to blow over.

“We wanted to show politics through lived experience, as opposed to just going out in the streets and handing out fliers, or yelling, or marching or any of that, which all have their places in time, but what we felt would be more fitting for Tampa and the Tampa area is to actually show what our politics actually are. To show that we want to build community and what the results of a built community would look like, which would be free services offered by people who have various different specialties. Everything from yoga, to acupuncture to the Tampa Bay Bike Coop coming down and helping out with people needing tune-ups, to sweet water farms contributing giving seeds for people, for their gardens. This was a very peaceful event. We didn’t plan to go out in the streets or do anything that would necessarily cause a stir for the police or cause a headache for them, or block traffic, or any of those types of things happening in other cities.”

Most of the attendees came by bike. Jim Shirk is chair of the Hillsborough County Bicycle and Pedestrian Advisory Committee. When he was finished oiling everyone’s chains, he said in order for communities to sustain themselves they must deal with inequality.

“I wanted this event to happen because I wanted people to, I wanted our community to come together and share things, and talk to each other and get to know each other, and realize what skills and things we can just give to each other basically, and are just available- that we don’t have to walk around like we don’t know anyone and we don’t know how to, I dunno -communities should sustain themselves, should be there for each other, like the people within.”

It was initially supposed to be held at River Crest Park. But two days beforehand, Brenner received a phone call from the police at work.

“He was like, so I just wanted to ask if you had permit for the event, and I was like oh well no I don’t, but I didn’t realize that I needed one to have you know a bunch of my friends and people from my community to come to a public park and have a picnic basically. And he was like, oh well you do need a permit for this event because of the number of people who have RSVPed on your Facebook page.”

She was also told that she would be held legally liable if anything bad were to happen. She and her fellow organizers felt as though they could have been given more notice.

“The city of Tampa calls me, and she says that the event has to cancelled, and that there is nothing I can do about it, and she said you know, that the process which is no different for any person who ever wants to have an event, so it’s not special for me or anyone else. She was very clear in saying that to me- is that you apply at least thirty days in advance for a permit and then you must apply for liability insurance through some kind of Lowry Park thing and so it could take sixty days plus.”

Having witnessed many large social gatherings and celebrations at the park, Brenner was puzzled.

“Okay, so suppose like, I wanted to have my Quinceañera or something at the park and I had like a lot of relatives, do I have to pay for a permit depending on the number of relatives I have coming?”

“So, you know, I just feel like it’s very much related to the fact that it’s on May Day, and they just didn’t want it to happen. And they had you know, they had room to be like, well you don’t have a permit so you can’t do it. So that was what they used- and they waited strategically to the last second to be like boom, can’t do!”

Without exchanging money, members of Food not Bombs fed everyone, including many people living on the streets. Sweetwater farm provided seeds and plants. There were also many tables filled with books – from classic poetry to the political histories of several continents. Everyone brought something and everyone left with something. There was something for everyone.