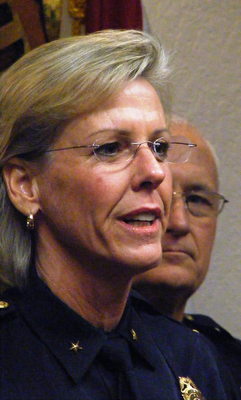 Tampa has a new Police Chief. Chief Jane Castor was sworn in this afternoon after being unanimously approved this morning by the Tampa City Council.

Castor is the city’s first woman and its first openly lesbian police chief. She served as the Tampa Police Department’s liaison to the gay and lesbian community. LGBT advocates such as Equality Florida have said they are “thrilled” at Mayor Pam Iorio’s choice of Castor to become chief. City Council member Mary Mulhern quipped that this was the first time people were happy she pulled an item off the consent agenda for discussion.

The Council also asked city staff to prepare a draft update of Tampa’s Human Rights Ordinance to include protections for transgender individuals. Philip Dinkins is a member of the city’s Human Rights Board

City Council member Gwen Miller made the motion for city staff to craft an update to the Human Rights Ordinance to protect the transgender community. The motion was seconded by Linda Saul-Sena and it passed unanimously. The update will be considered within the next month.

Also during Thursday’s meeting, City Council unanimously passed on first reading a repeal of the bicycle bell ordinance. Under the current ordinance that could be repealed after the second reading on October 15th, all bicycles are required to have bells. It’s controversial because some see it as an excuse for law enforcement to stop and search bike riders when they have no other excuse to do so.