About a week or so ago, late night talk show host, Jimmy Fallon introduced The Tonight Show’s first ever book club and included The Immortalists, the brilliant new novel by Chloe Benjamin. Perhaps, because Fallon has come under critical scrutiny after his gentle-cozy interview with Trump, the least cerebral of late-night comedians is not usually associated with anything other than chummy-chats with show-biz guests promoting whatever they are obligated to flog to the masses. So it came as no surprise when a few of Life Elsewhere’s attentive listeners decided to voice their opinions. Our interview with Chloe Benjamin had been well-received but our listeners were mystified as to how such a smart book managed to be on Jimmy’s book list! Had they missed the plot? Laney wrote to say that she wondered, “Is The Immortalists that lightweight?” And Meredith asked, “The book sounded serious and intense, did I miss the part about it being funny?” These questions prompted us to revisit Norman B’s interview with Chloe Benjamin. Yes, it is an intense book and it’s a note-worthy interview. Hear it again in this edition of Life Elsewhere, then perhaps we can all reevaluate the intellectual standing of Fallon, or at least give a big thumbs up to his producers.
Katja Pantzar discovered the simple, nature-inspired ways that Finns stay happy, healthy and strong – no matter what life has in store. This included swimming every day, even in winter when the water is 1 degree Celsius (34 Fahrenheit and feels as if hundreds of pins and needles are pricking your body. Katja joins the program to discuss her new helpful book, The Finnish Way.
The Great Believers is one of the first books to chronicle the AIDS epidemic from its initial outbreak to the present. Rebecca Makkai has written a powerful novel of friendship and redemption in the face of tragedy. She weaves together 1980’s Chicago and contemporary Paris to tell a story of survivors who were forever affected by the AIDS crisis. Rebecca’s achingly beautiful novel touches on governmental indifference, survivor’s guilt, and a broken healthcare system. This is an emotive interview, you won’t want to miss. 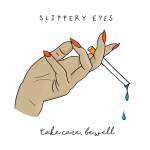 Every so often, we like to squeeze in a new music discovery, Slippery Eyes are from Portland, Oregon. Their excellent EP is titled Take Care, Be Well and the track we selected is Slippery Eyes. The band is Cai on vocals and guitar. Cassie plays bass, Christian is on drums and Jesse is also on guitar. Check out more new music at Life Elsewhere Music.