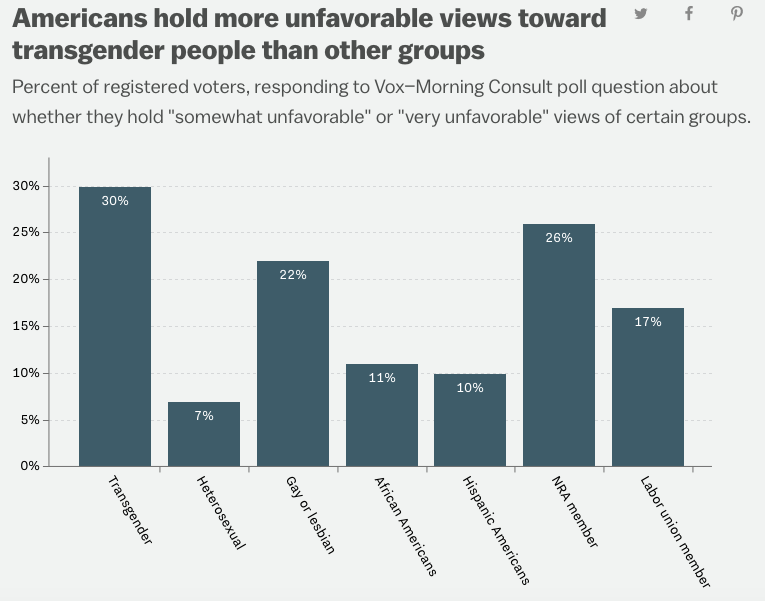 “Where do most Americans stand on trans issues in general?” That headline caught our attention. But, it was the sub-heading that really stopped us in our tracks, “Americans hold more unfavorable views toward transgender people than other groups.” This surprising statement was the result of a recent survey conducted by Vox and Morning Consult. According to Vox, “The results of their survey were mixed. Respondents tended to report more negative feelings toward trans people than other groups. And although a plurality said they support laws that prohibit discrimination against trans people, they were divided on whether trans people should be able to use the bathroom that aligns with their gender identity.”

Back in 2013, we produced a Transgender edition, after Chelsea Manning announced she was beginning hormone treatment to become a woman. We thought it important then to take a closer look at Transgender issues and try to disavow the flurry of misinformation and questionable comments about Transgender people that percolated the media. Our guests included Catherine Hyde the mother of a Transgender child, Michael Keeffe who was born female and now presents as a man, and Dr. Michael Hendricks who specializes in Transgender issues. In the next edition of Life Elsewhere we present edited versions of our interviews. Listen carefully to our three guests, what they say is so important now, especially after reviewing the Vox and Morning Consult survey.

PS: You can now download the new WMNF mobile app for FREE and listen to LIfe Elsewhere as it streams live at 12 noon ET every Sunday