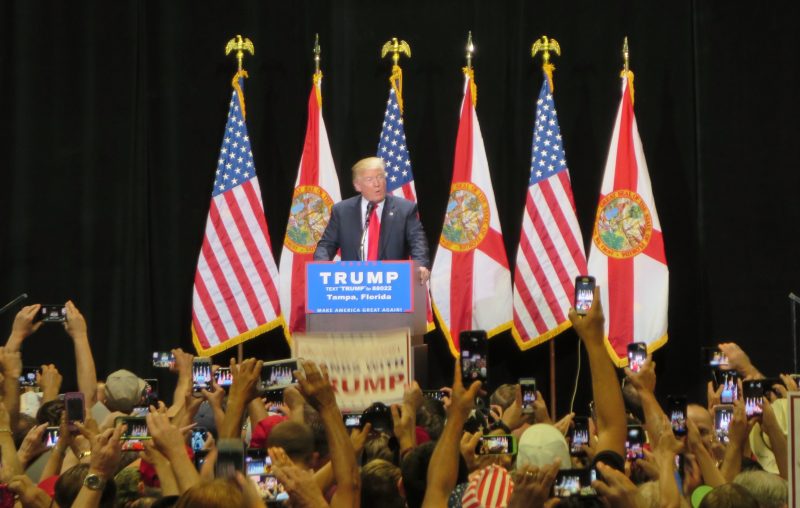 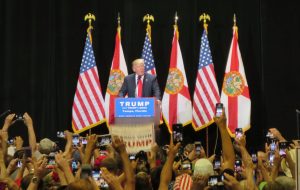 Donald Trump’s Tampa visit was full of rhetoric and low on details. The Trump Train made a whistle stop at The Tampa Convention Center, last Saturday. The media savvy, GOP firebrand, berated his critics to the delight of his Florida supporters.

Trump took to the podium after about 70 minutes of strategic and high profile endorsements from Republican bigwigs, like Attorney General of Florida, Pam Bondi and Governor Rick Scott. Trump is notorious for not using a teleprompter. His speeches tend to ramble but he wasted no time attacking President Obama and Hillary Clinton.

The hall in the Tampa Convention Center can hold up to 10,000 people. It was about one third full. Trump boasted about giving only one day’s notice of the event. This might account for the low turnout. Bad press swirled around Trump last week. One supporter, Charles Reed, said there’s a conspiracy to make Trump look bad Trump and it’s partly Hillary’s fault.

“I think it’s the Democrats and the media’s fault. The media seems to be favoring Obama and Hillary so much. Hillary is pulling off so much crap and saying so many things and has done so much bad….”

Trump went after Massachusetts senator Elizabeth Warren too. Warren has been verbally sparring with Trump on social media. He dismissed her alleged Aative American heritage with a racial slur: Pocahontas. But Republicans, like Mitt Romney, also got the Trump treatment.

“I watched this poor sad Mitt Romney this morning. (Mocking Romney’s comment) He suffers from misogynist. I don’t think he knows what misogynist is. And he’s sitting like a real stiff. Don’t forget; this guy let us down folks. He choked and he let us down.”

At about the halfway mark of Trump’s 50 minute speech, some supporters headed for the exits. Most stayed to hear Trump meander through his talking points. Things like strengthening the 2nd amendment, more aggressive trade with China, fear of Islamic terrorism and, of course, the proposed boarder wall with Mexico. The crowd seemed to be waiting for this moment.

Outside the Convention Center, Trump protesters verbally clashed with Trump supporters. No major incidents were reported.