Home Music The Glory of the Ukulele – updated with video! 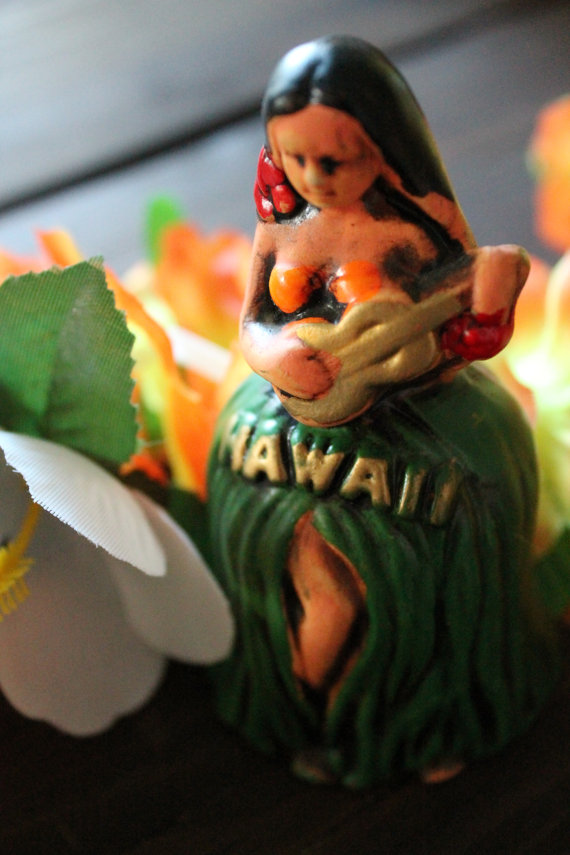 “If everyone played the ukulele, the world would be a better place.” Jake Shimabukuro

The world will be a slightly better place, or at least New World Brewery will be a better place on Saturday night for WMNF’s first ever ukelele festival, Uke It Out.  What makes Flea, our music director, host of Monday’s It’s the Music program, and Uke fan so excited about ukeleles?
“I love the way they make songs sound so different, so exotic,” said Flea. “It’s exotica!”

Ukuleles were developed in Hawaii as an adaptation of the small Portuguese machete de braça late in the 19th century, as Portuguese immigrants came to the Hawaiian islands from islands off the north African coast, according to Wikipedia. Even more revealing, Wikipedia declares that Ukelele translates to Jumping Flea, which might be another reason that our music director likes them so. 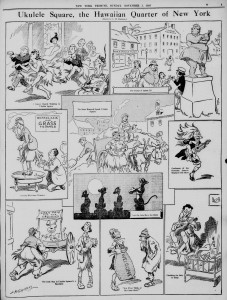 They were embraced by the jazz age in the US, and ukuleles spread throughout the world, and were featured in comics, ads, radio shows and movie reels, symbolizing a charming, harmless recklessness.  World War II brought the US’s attention to the Pacific, and the ukulele, and cheap little ones were manufactured by the millions.

“On the good days, my mother would haul out the ukulele and we’d sit around the kitchen table – it was a cardboard table with a linoleum top – and sing.” Carol Burnett

The cool factor of ukuleles faded in the 1950s as rock’n’roll, with its big guitars and stand up basses, grabbed the attention of the young and the hip. Baby boomers weren’t that interested in their parents’ music or instruments, and the ukulele was strummed more often on Arthur Godfrey Time than by Chuck Berry, The Sonics, Buddy Holly, and all of the garage bands.

“I was reading a magazine when I was a little kid, probably about twelve years old, and an ad said that if you sell so many jars of Noxzema skin cream, we’ll sell you a ukulele. So I went out and banged on doors in the snow in Quincy, Massachusetts, where I was raised, and I sold the skin cream.”  Dick Dale

The 1960s put the squeeze on the ukulele, with it being consigned either to nostalgia or novelty acts, like Tiny Tim. The uke was at best, the first step to serious guitar playing, played by serious guitar dudes, who maybe preferred the term guitar gods. It isn’t easy picturing Jimmy Page or John Entwistle playing a uke. 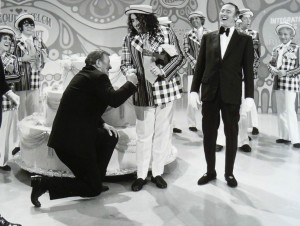 For decades after that, the ukulele was at best a charming distraction, brought out as a joke or a throwback to a more innocent time.

But as folk music began to influence main stream music, starting in the late 1980s, the ukulele started to show up more frequently.  Different musicians discovered it, and its sound seemed fresh and surprising.  At the same time, traditional music was increasingly embraced by Hawaiian youth, and the ukulele was played and promoted by the islanders. Israel (Iz) Kamakawiwo’ole, one of the best selling Hawaiian musicians of all time, added socially conscious lyrics to his ukulele songs, and popularized the instrument with his medley of Somewhere over a Rainbow/What a Wonderful World in 1993.

One of the first videos to go viral on Youtube was Jake Shimabukuro’s version of While My Guitar Gently Weeps, shot in Central Park for a NYC cable show called Midnight Ukulele Disco.  Now a search for ukulele on Youtube gives you 4,500,000 results. Everyone loves the ukulele!

Attendees to WMNF’s Uke Fest can bring in their own ukulele to either compete to be the Jimi Hendrix of the Ukulele and win this trophy, 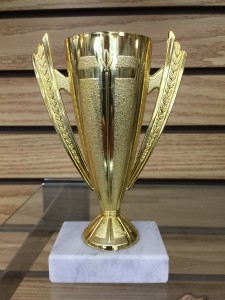 and/or they can join in the ukulele jam at the end of the show.  Everyone is welcome, and everyone will get a lift from this charming, exotic instrument.

We will be raffling off a ukulele donated by Dean’s Guitars. The band, JCT 27, one of the headliners of the Uke Fest, will be on the Live Music Showcase on Friday, October 23, at 2pm.  They are described by Flea as an original, upbeat all electric ukulele band who brings diverse instrumentation and a variety of genres to their original music. The sound created by this ukulele band brings “uke fusion” to their performances.

“I watched a lot of YouTube videos of cute geeky girls playing ’80s cover tunes on ukuleles. Technically, this wasn’t part of my research, but I had a serious cute-geeky-girls-playing-ukuleles fetish that I can neither explain nor defend.”  Ernest Cline

Here is the boss of the Uke!