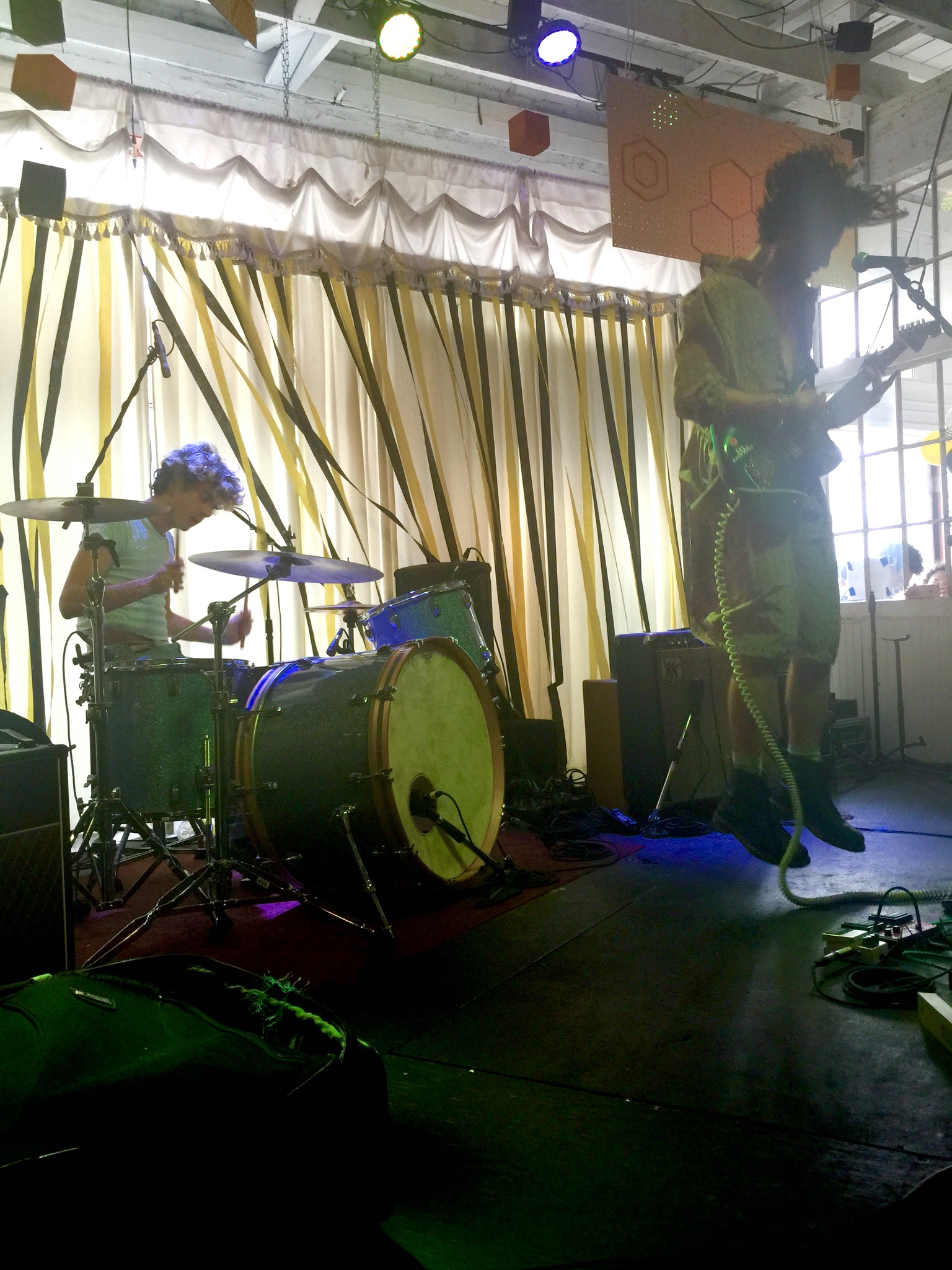 On the surface, there may not seem to be many – even any – similarities between AMFMS and PWR BTTM, other than all-cap monikers and a penchant for the loudest of guitars. Fronting AMFMS is Tampa’s favorite bad boy rocker, Shawn Kyle (nee Beauville). The band calls the Baltimore/DC area home when they’re not living in a van. Near constant touring is the price they pay for attention from the likes of CMJ, Entertainment Weekly, KCRW Los Angeles, Spin, Paste, and the list goes on.

AMFMS played an official SXSW showcase at Icenhauer’s, one of the chic new bungalow-turned-bars in the Rainey Street Historic District. With a tight band behind him, Kyle’s tortured, textured vocals rose from whispers to screams in seamless phrasing. He’s a singer who demands full attention and commands the stage with the barest shrug of a shoulder.

WMNF Music Director Lee (Flee) Courtney and I cheered when he tossed his empty whisky glass to the floor. Too bad the guitar he was playing was too good to sacrifice. As we left, reluctantly but on a mission to get into Iggy Pop’s showcase, Flee commented with satisfaction, “That’s how a rock star should act!”

We caught PWR BTTM by accident at an afternoon party at the Swan Dive, a hip new venue on Red River Street with the best neon sign in Austin. We were tired, the afternoon was hot, and the Swan Dive had empty seats under a weak A/C vent. Seats are the most precious commodity at SXSW; air is a bonus.

A young man with a poofy bleached-ends hairdo reclined on the small stage, artfully ignoring the gathering crowd to move through a series of stretches in baggy high-waist mom-jeans. Liv Bruce, drummer. Then his partner, Ben Hopkins, stomped out in rough leather boots and a polyester thrift-store dress. He had pinned a loose tulle veil in his messy wavy hair. His face was smeared with Kabuki-inspired glitter make-up. With a scream and a snarl, the duo Pitchfork describes as “gloriously queer garage punk” blasted to life.

Ben Hopkins is another performer impossible not to watch. Beneath his motley appearance (“I’m looking for a husband,” he screamed in explanation for his attire), there’s an earnest sweetness in his lyrics that charms the crowd of girls and boys and tired post-middle-aged wanderers

By the end of PWR BTTM’s ear numbing set, Ben’s dress was rent from collar to waist, the veil was tattered, and young lesbians across the table were unaware they had spilled our drinks, and like the rest of the crowd, we were smiling. If only they were touring in Florida anytime soon, although they told Flee perhaps in June. (Editor’s note-WMNF is trying to book them!)

An exaggerated extravert who’s probably an introvert might be an assessment of both Shawn Kyle (AMFMS) and Ben Hopkins (PWR BTTM). Both performers command the stage, personas blazing. They have a clear idea of who you’re there to see, even if you don’t know it when walking in. Both have the power of personality – the raw kinetic energy – to drive the set. Their executions couldn’t be more opposite, but the result is the same: you can’t take your eyes off them.