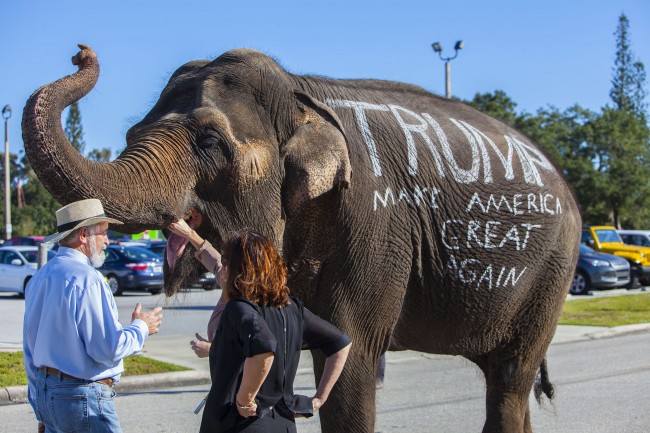 Republican presidential front-runner Donald Trump is coming to the USF SunDome Friday night and students are organizing a protest outside.

“One of the people saw an article that, you know, Donald Trump was coming to our campus. And immediately we started organizing. While we don’t, we aren’t officially affiliated with any party or other political tendency in particular, that we do stand against everything that, or I don’t want to say everything, but, you know the very backwards things that Donald Trump supports. You know, his view on refugees and on undocumented people as well as on like LGBTQ people and on women are just absolutely disgusting. So, we felt that as a progressive organization on our campus, it was our duty to make the call for action against Donald Trump.”

What will it look like? What time does it start? Where will you be? And so on.

“The actual event, I’m pretty sure the doors don’t open until 5:00, but, we’re aiming to be there and sort of getting started around 4 o’ clock. We are going to be near the entrance.”

Will you be disrupting the talk or is it just holding signs outside?

“Well, you see we’re not looking to get kicked out or anything. Our main concern is for students to understand that there are progressive forces on campus that are against this monster. So, we won’t be disrupting the event. We won’t be going inside. That’s not our goal.”

A little more than a decade ago, President [George W.] Bush came to USF Tampa and there were protests there and because the event was considered private property because the Republican party, or whatever it was, rented that area. And so the protesters were put across Alumni Drive, I believe it was, where the marching band practices. Has the administration indicated to you that you won’t be able to protest near the SunDome?

“Not at this point. They haven’t said anything. As far as I know and as far as the rest of SDS knows, they also haven’t said anything to the other main group doing protests. They are a group specifically associated with Bernie Sanders. But, we’re working together with them as progressive forces.

“So, no, we have gotten no indication of that. However, we find it extremely important that people know that we stand against Trump and so we’ll be right there, at the building until we are forced to leave.”

Here’s the link to another protest of Trump‘s appearance at USF.