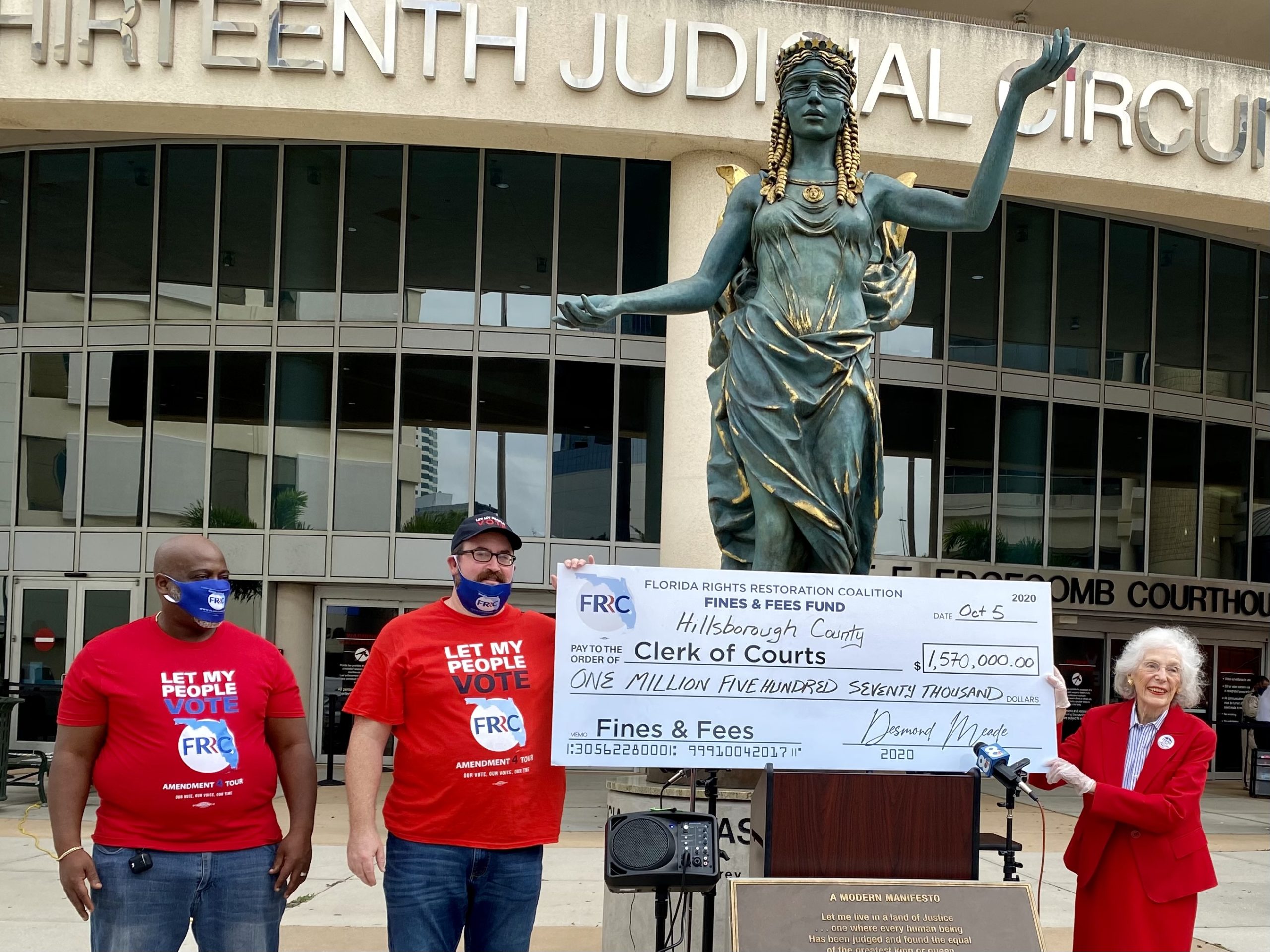 Members of the Florida Rights Restoration Coalition gathered in front of the Edgecomb Courthouse in Tampa Monday to announce a $1.5 million donation to the Hillsborough County Clerk of Courts aimed at covering fines and fees of felons hoping to register to vote.

Hillsborough has already cleared the way for more than 800 felons to register with the help of the FRRC.

After completing the requirements of her sentence in 1995, Angela Judge couldn’t wait to vote again.

Judge said she was able to vote for five years, but was removed from the voter roll during the 2000 Presidential election. For years she searched, but couldn’t figure out why.

“For years I couldn’t find out who to pay or who I should’ve paid or what was going on,” she said. “Everybody said something different.”

When Amendment 4 was overwhelmingly passed in 2018, clearing the way for felons to have voting rights restored, Judge immediately registered. Then, with the help of the FRRC, she said she was able to find and pay a fine of almost $1,000 she didn’t even know about.

“I ended up finding out through the Florida Rights Restoration Coalition that I had a small, outstanding debt, fines and court fees,” she said. “(I) had no idea.”

Judge is one of the estimated 25,000 people the FRRC has helped pay back fines and fees keeping them from voting. After Amendment 4 passed, Governor Ron DeSantis and the Florida legislature added provisions saying fines and fees associated with a sentence had to be paid in order for felons to vote. Completing a prison sentence or probation was not enough.

In response, the FRRC created the Fines and Fees fund to help cover those fees. Executive director Desmond Meade was on hand Monday to present a check to Hillsborough County.

“No American citizen should be forced to choose betweenputting food on their table and voting,” he said. “No Floridian should have to choose between paying their rent or their mortgage or voting.”

The $1.5 million would help clear the way for some felons to vote in future elections, according to Hillsborough Courts spokesperson Tom Scherberger. He said the court has already received more than $750,000 to restore the rights of 841 felons who were eligible to vote in the coming general election by the Oct. 5 registration deadline.

Incoming Hillsborough Clerk of Courts Cindy Stuart said she will continue to fight to restore voting rights to felons. Stuart will take office in January when she replaces the 90-year-old Pat Frank.

“As Pat has done, I will put the full force of this office and the hard working clerks inside this courthouse behind me and the Florida Restoration Coalition and their important mission to paying of those financial obligations to work,” Stuart said.

Meade said the FRRC has received celebrity donations from the likes of LeBron James and others, but none of the $25 million raised came from Michael Bloomberg’s controversial $16 million pledge to restore rights. Furthermore, he said, the coalition wants access for all felons, regardless of who they might vote for.

“At the end of the day what matters most to us is not how a person votes,” he said. “But the fact that they have the opportunity to have their voices heard.”