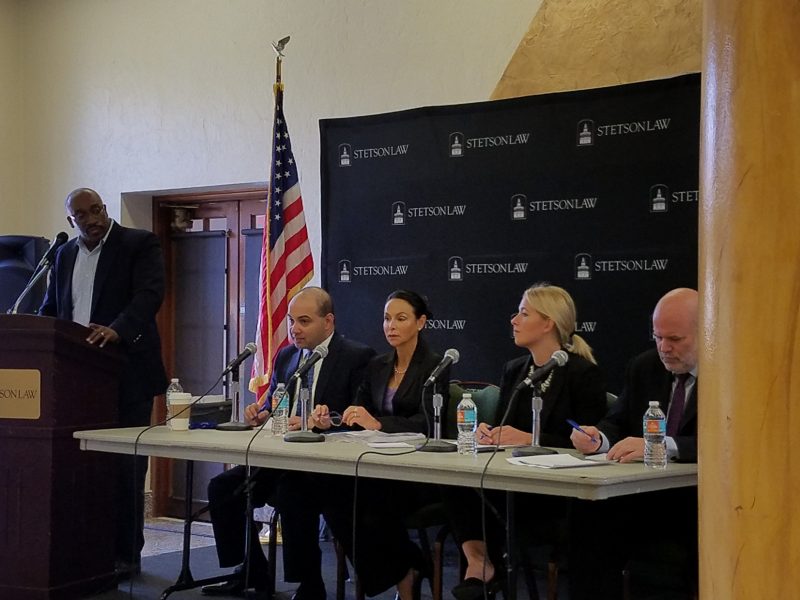 The United States could be doing more to help refugees being created by its wars in Southeast Asia; that was one point that came out during a panel discussion by law experts Monday morning at the Stetson University College of Law in Gulfport.

Yakzan says the U.S. is only helping to resettle a tiny fraction of the millions of new refugees.

“For the State Department,” Nagle responded.

“I’ve been interviewed before, about the refugee crisis. We did have and unfortunately I’m going to say this and not a lot of people might like it, but, in Florida we did have a bill that was supposed to stop refugees from coming to the state of Florida. I was interviewed about this before.

“What do these people have? If you stay there– I was internal[ly] displaced before, as a kid, when there was civil war in Lebanon. I grew up with bombs and people dying in front of me. It scars you for life. So, staying there is not an option and also leaving to a different country is not an option. So what do you do? Do you stay there for that? I really don’t think so.

“I think we need to increase our numbers and open our borders for these people that really need our help.”

Professor Nagle laid out the scope of the refugee problem.

“Today, we are witnessing a global refugee crisis, with an estimate of 21,000,000 souls, forced to leave their homelands and territories. These are individuals fleeing a conflict, human rights violations and persecution.

“The distressing estimates increase on [a] daily basis. With billions more suffering unbearable despair that forces them to flee from countries like Syria, Iraq, Burundi, Afghanistan, South Sudan, Myanmar, many countries throughout Central America, just to name a few.”