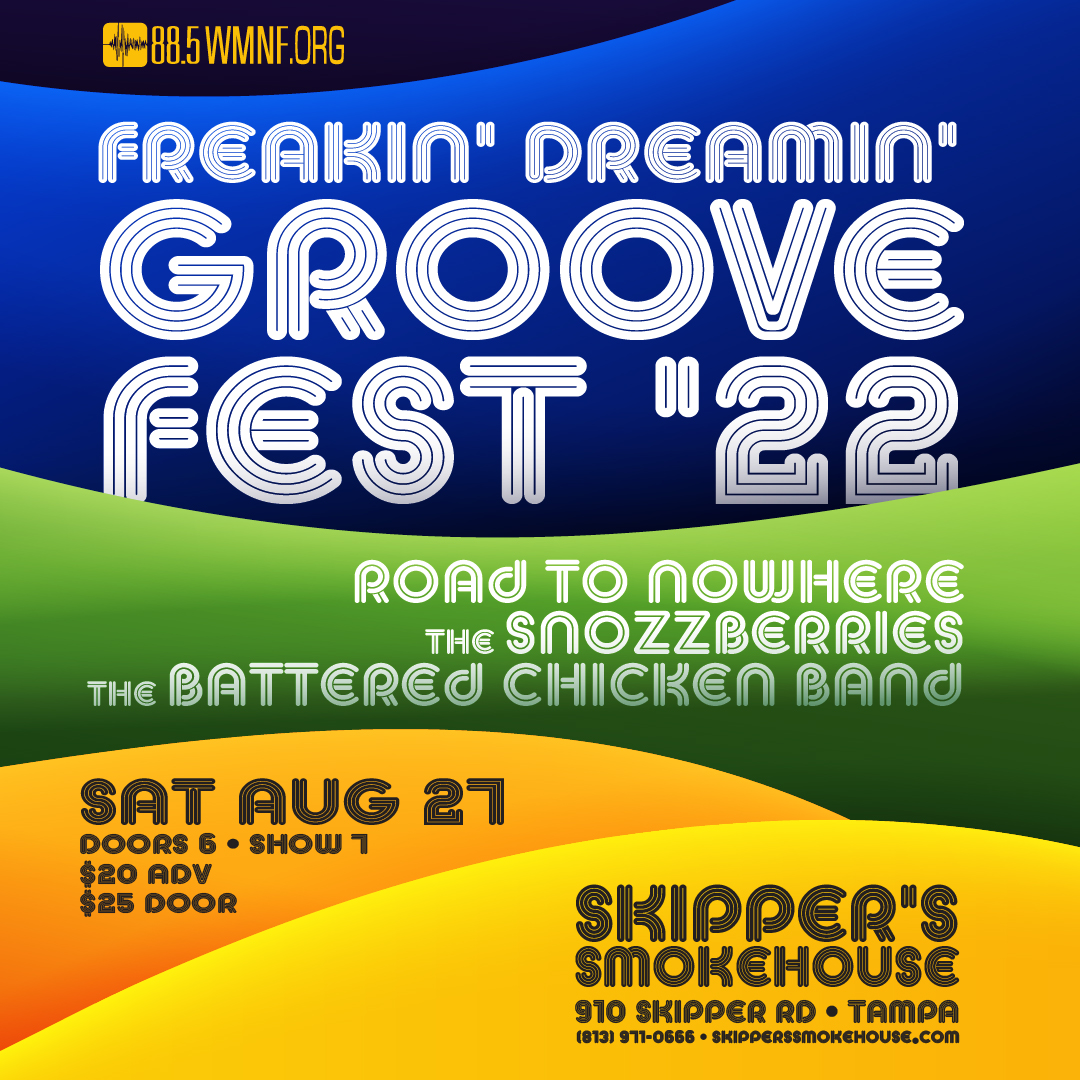 Tickets On Sale NOW
$20 in Advance
$25 at the Door
Buy Your Ticket NOW Below!

Groovefest is BACK! After being cancelled due to the COVID-19 pandemic, WMNF’s Freakin’ Dreamin’ Groovefest is happening once again. Come hear positive and psychedelic sounds from local acts The Battered Chicken Band and Road to Nowhere, a Talking Heads tribute, plus Asheville, North Carolina’s The Snozzberries! Don’t miss out meeting and dancing with your favorite hosts from Tye Dye Tuesdays on WMNF: Grateful Ed from The Freak Show, Dennis Stone of The Dream Clinic, and In The Groove‘s Thor and Wayne.

Since their formation in fall of 2017, The Snozzberries have quickly gained notoriety for their electrifying live performances where melodic songcraft is interwoven with wild improvisation and technical wizardry. Their infectious grooves have taken storm across the region, with 2019 highlights including Sweetwater 420 Festival, Resonance Music & Arts Festival, Warren Haynes Xmas Jam-By-Day, Dark Star’s Pisgah Jubilee, and many more. The Snozzberries hosted official afterparties for The Disco Biscuits, Lotus and Papadosio. The band also tours extensively, mesmerizing audiences across the states with their esoteric fusion of old-school rock with modern psychedelia.

Before the Egg or the Chicken, there was a Ranch in central Florida! The Battered Chicken Band met at an annual music event at a ranch that attracted musicians from all over the world to perform. Among them were six artists from Florida’s west coast who decided to form a band to play some of their favorite songs, most of which were well known, but seldom performed in your typical music venue. Hence, The Battered Chicken Band, or Ba Chi Ba, was born!

Road to Nowhere has been called the best Talking Heads Tribute Band in the Tampa Bay area! With more than a dozen songs in their repertoire, from well known classics to deeper gems, Road to Nowhere meets the challenge of staying true to the sound of the famous and widely-loved band of David Byrne. Members include WMNF favorite Row Jomah, Dave Gerulat of shoeless soul, Miss Robyn Alleman of local funk juggernaut Holey Miss Moley, and Displace’s Vinny “Tina Weymouth” Svoboda.

Grab you ticket now below!