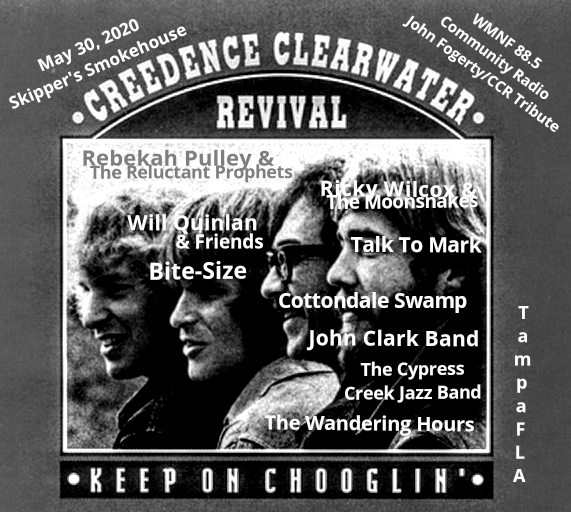 John Fogerty has created some of the most vital and joyous American music of the last fifty years.  His band Creedence Clearwater Revival had hit after hit, many times with two-sided singles both charting,  from 1969 to 1971, creating a monumental and mythic American music. Drawing equally from rockabilly, country, and blues — all sounds associated with the South, a region far away from John Fogerty’s  native northern California —  he developed a distinctive brand of rock & roll and a formidable songbook. After CCR broke up in 1972 there was legal acrimony but eventually Fogerty resumed writing and performing,  resulting in more hits  and greater recognition for his important role in American roots music.

WMNF has assembled some of the best musicians in Tampa Bay to celebrate John Fogerty’s 75th birthday.

Rebekah Pulley and the Reluctant Prophets  :   I Put a Spell on You;  Run Through the Jungle;  Someday Never Comes

Ricky Wilcox and The Moonsnakes  :  Almost Saturday Night;  Down on the Corner;  Rockin’ All Over the World;  Sweet Hitch Hiker

Will Quinlan and friends  –   Lodi ;  Wrote a Song for Everyone;   Effigy

Talk To Mark   –   Proud Mary;   Up Around the Bend;  Green River;   I Heard It Through the Grapevine

BiteSize   –  Hey Tonight;   Ooby Dooby;   Born on the Bayou; Before You Accuse Me

Cottondale Swamp  –  Have You Ever Seen the Rain;  Suzy Q;  Fortunate Son;  Old Man Down the Road

John Clark Band  –  Long As I Can See the Light;  Deja Vu All Over Again;  Who’ll Stop the Rain;  Gunslinger

The Wandering Hours  –   Midnight Special;   Hello Mary Lou ;  Looking Out My Back Door