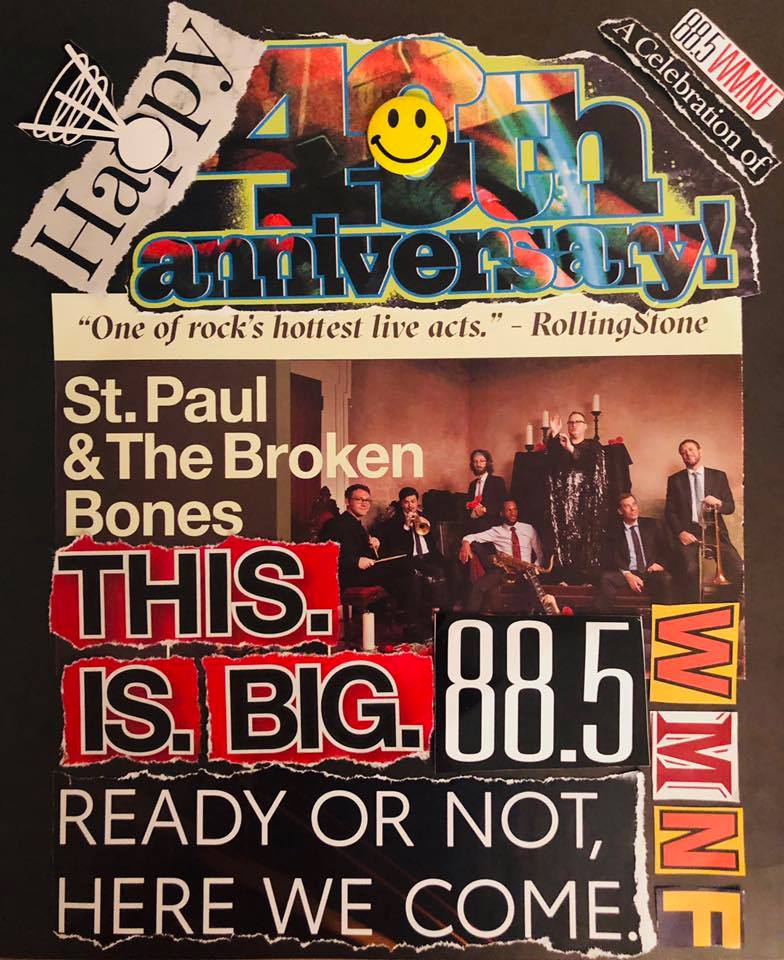 To accommodate all who want to come,  we will NOT have tables and chairs for everybody.   If you are planning to bring food, get there early to get a table.  We will not be unhappy if you decide to sample some of St. Petersburg’s fine dining before the concert.  Doors 7:30pm the music starts at 8:30pm.

This will be more than a fabulous concert!  It will a fantastic WMNF party! With BIRTHDAY CAKE and favors, WMNF historical artifacts, a picture booth and a silent auction.  The Coliseum has free parking for guests.  You can bring your own food!  No coolers or liquids… They have a cash bar with liquor, beer, wine, soda & water.

Doors to venue open at 7:30pm ~ Will-call should be available by 5pm in the lobby ~

Blood is thicker than water, and it can leave scars. But like it or not, those in our bloodlines are stuck with us—and us with them—for better or for worse. Paul Janeway understands this conundrum of heritage well. The singer of the Birmingham, Alabama–based rock and roll soul band St. Paul & The Broken Bones was born and raised in America’s Deep South, a place where social consciousness can still take a backseat to unsavory traditions and where a family’s expectations sometimes supersede all else. Despite the fierce familial love, he enjoyed and constantly gave back while growing up—especially to his father and grandfather—from an early age Janeway realized that the way he thought about the world was a little different from those around him, and he began to seek an outlet from which to share what was in his heart and on his mind. Blessed with a powerful voice, a magnetism for connecting with people, and a gift for making music, he traded in a career in ministry to start his own band.

“I’ve always been the artsy weirdo in the family,” Janeway says. “I’m liberal, a blue dot in a very red part of the world. When you’re from Alabama you have to go out of your way to make people understand that you think a little differently. But we’re an Alabama band—it’s who we are.”

St. Paul & The Broken Bones formed in 2012, releasing their debut album Half the City in 2014 and its follow up, 2016’s Sea of Noise, and their 2019 album Young Sick Camelia, all to much acclaim. Those strong efforts have placed them on the national scene, and the band worked hard to prove they were no mere retro-soul band—from touring the world relentlessly, including being selected to open for The Rolling Stones and headlining two nights at the Ryman Auditorium, to TV appearances including The Late Show with David Letterman, Jimmy Kimmel Live, Conan, Austin City Limits two appearances on The Late Show with Stephen Colbert, one being the very first episode. Janeway’s fearless showmanship, thoughtful lyrics, and dedication to his performance soon became the band’s calling card, and paired with the inventive and skillful direction of co-band leader Jesse Phillips as well as a full eight-man roster comprised of some of the best young instrumentalists in the South, they have become a must-see event.

Most people know Aaron Lee Tasjan as one of the wittiest, most offbeat, brilliant, weed- smokin’ & LSD microdosin’ Americana troubadours writing and singing songs today. And the New York Times, NPR and Rolling Stone will all gladly corroborate. But steel yourselves, fans, because he has followed his restless muse straight out from under the weight of everyone’s expectations into the kind of glammy, jingle-jangle power-pop- and- psych-tinged sounds he hasn’t dabbled in since his younger days playing lead guitar for a late-period incarnation of The New York Dolls.

The roots  of his current music stretch even deeper, drinking up the sounds of a Southern California childhood spent listening to The Beatles while riding around with his mom at the wheel of their navy blue Volvo station wagon— back to the very first pre-teen year he picked up a six-string and started figuring out all the pretty little chords in those Lennon-McCartney tunes. Back to the pure, blissful unfiltered innocence of falling in love with music for the first time.