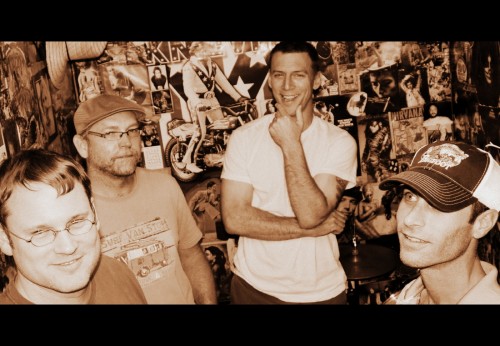 Named after a small community in Florida with a rich and mysterious past this alternative rock band is itself a mystical adventure.  Our music is “a state of mind inspired by a place in the state,” says members of the band of their sound. It’s a Florida band with a Florida sensibility. Their original compositions are reminiscent of a feeling that can only be described as Floridian. The members are: Todd McBride (vocals, bass, guitar), Michael Todd (keyboards, vocals, guitar, bass), George Eckerle III (guitars, vocals), Chad Mairn (drums, vocals).

From the poem “Waiting” -“So to give ourselves a grip we started this band and wrote these songs when we play them live in front of you, everything’s right we all get along they’re stories ’bout times with friends in places we know and places we’re from when we’re rulers of these hills armed with only dirtbombs still the band lives on trying to hold onto something truly true like that first punk rock in Monk’s garage tryin’ to sound cool then half-a-dozen dingy storage spaces with friends around live here, born here, grew up here, keep two feet on the ground…”

“Fowler’s Bluff creates a sound that is dark, dynamic and complex at times yet simple and joyous at other times — a musical soup reminiscent of their Suwannee River namesake. If I had to compare them to something you might have heard before, I’d probably go with Wilco for the dynamics, with a dash of Johnny Cash but with a decidedly southern country bend, a little of that Radioheadish beautific-chaoticness and sprinkles of Fugazi for the guys’ obvious love of anthemic hardcore/punk rock. And then there’s some jazz layered in as well. Heady comparisons I know but this is a serious band.” – Jon West