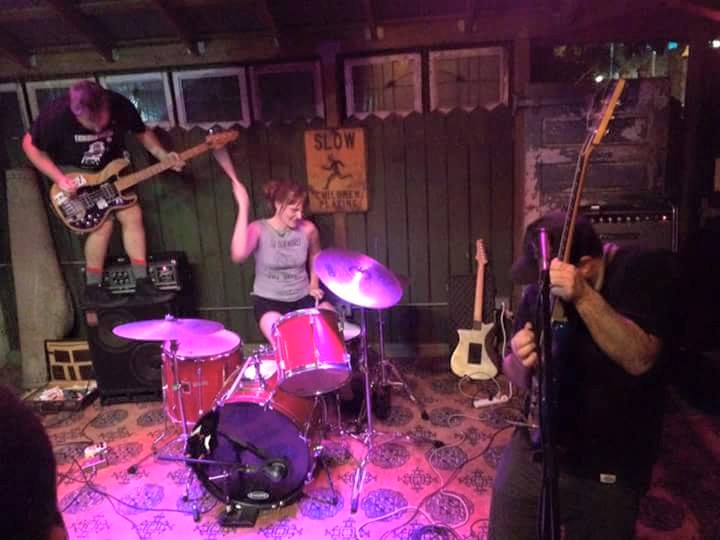 The band played their first show together without ever having practiced. The venue: a doctor’s office. Mostly improvised; w/ audience members reading infomercial ad copy in lieu of a singer, they called it a success eventually writing new songs and taking over vocal duties themselves. Calling the underground Punk/Art scene their home, PM have spent the last 2 years cutting their teeth in true DIY fashion: playing house shows on self-booked tours of the U.S. and recording/releasing home-packaged EP’s.

With tunes informed by the decades-long thread of dissonant post-post-punk and the commercial language contained within the aforementioned ad copy, people have told the band they’ve identified elements in their sound as disparate as fuzzed-out garage-psych, author Phillip K Dick, sci-fi surf, avant-electronic, even pamphlets handed out on street corners by the schizophrenic homeless. “Sure, why not?” the band replies, being agreeable folk, and gets back to writing and touring.

The three of them recently realized none has a single tattoo; take away from that what you will.

‘The Void… It Creeps’ is the band’s debut full length (on New Granada Records).

PRESS FOR ‘THE VOID…IT CREEPS’:
“…infectious hooks and rhythmic punk fury…maniacal and charming…”
– CL’s Best of the Bay 2013 “Album of the Year”
– Creative Loafing

“Roger Miller/Mission Of Burma-ish squalls, vocals with a D. Boon cadence at times, a few Fall touches…. It all adds up to something that’s both edgy and melodic.”
– Suburban Voice

“I’m not aware of many other artists who’re doing anything quite like the Tampa, Florida-based trio’s resuscitation of seminal Punk’s most vital components.”
– Punk Globe

Press for “Gibbering” 7inch:
“It is really hard to pin point the sound of Permanent Makeup and that’s what makes them outstanding. With punk aggression, melodies and the constant squeal of guitar, it is a bona fide train wreck of goodness. At times you can hear influences of The Minutemen, maybe even a little “Bleach-era” Nirvana and a whole lot of edginess.” – http://innocentwords.com/permanent-makeup-gibbering/#sthash.5Xk79raK.dpuf