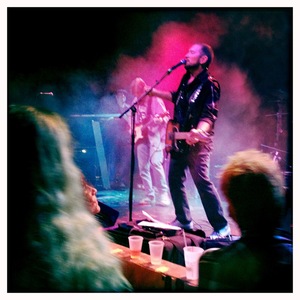 From 1983 until 1996 Ricky Wilcox played with legendary Tampa Bay band Deloris Telescope. But his musical experience runs across many platforms. Cutting his musical teeth in America’s power-pop heartland, Ohio where he grew up, Ricky’s early bands included PUNK from Cincinnati, legendary Chicago band D’THUMBS, and THEATRE, the group that brought him to Florida by way of Chicago and Detroit. Wilcox also has credits for a song featured on the ABC soap All My Children and a blink-and-you-miss-it cameo in The Punisher movie.

“The Moonsnakes are a five piece rock and roll band, put together for the most part, to play my original material in the way it was conceived and recorded,” writes Wilcox. “In what I would proudly call a power-pop format, we like to sing a lot of cool harmonies, play with a dynamic that utilizes the beauty of both loud and quiet, and hopefully, have a preponderance of discernable melody…um- we hope you come away humming a tune or two.”

On their latest album “Last Day On Planet Earth,” Sunshine Drenchy label, Ricky Wilcox sets the level high by opening with this melodic slice of pop heaven that just can’t fail to make you feel good no matter what the day has already thrown at you. -Malcolm Carter, Pennyblackmusic.co.uk.