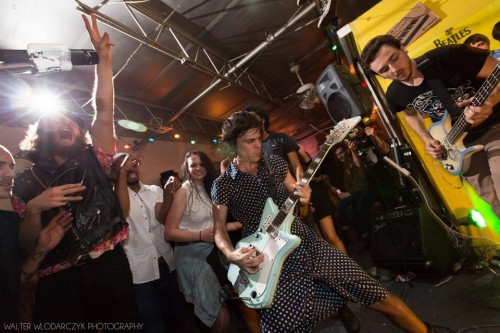 Sonic Graffiti is three guys who can sound like a “blender of blues, funk, punk and more…and is a fair audio equivalent to wild flashes of color on a blank canvas wall.” -James Lamont, Zero Warning.

The St. Petersburg  band came together out of necessity one day in early 2013, just weeks before the lead singer’s former band fell apart. Drew Giordano, called on his twin brother Dane – bass, and friend Trevor Mustoe – drums to fill in. Since then the trio have made it their motto to never say “no” to anything.

Aaron Lepley reports in the Tampa Bay Times – “Through conversation with the band, a bevy of influential band names come out at random: Sly and the Family Stone, the Velvet Underground, Funkadelic, the Stooges, the Clash, Jimi Hendrix, Otis Redding. Their sound is a rough, approximate amalgamation of all of the above, topped by frontman Drew ripping mad, distortion-driven riffs; and howling above the sonic mess with vocals heralding back to a young Captain Beefheart. This culminates into what they describe as Electrified Blues Voodoo Rock.”

Their LP of original music “Friendly Unit Creation Kit” can be found at Bandcamp.com as well as their first single Small Town Syndrome​/​Red Tide Killa.  They can be seen at many venues around Tampa, and try to have every weekend date filled. As they say, they aren’t worried about getting overplayed or burning themselves out in their own backyard. “We don’t give a f— about that idea: you’ll get played out if you play St. Pete too many times,” Drew said. “We always say yes, and keep playing. We’re a real rock ‘n’ roll band. I think we do that, ’cause we do the best we can. Even if you f— up and you’re doing the best you can people will at least see you have some character. When we play, I feel something different than when I do anything else. It must be what some people call religion.”