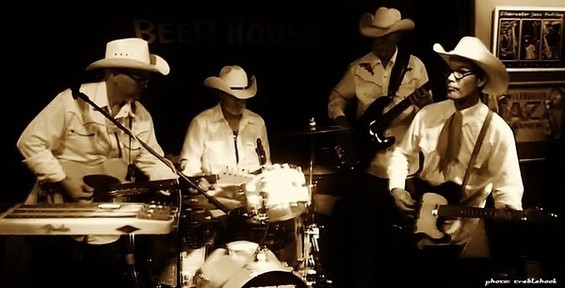 The Only Daddys attract a dedicated following of fans who love the retro-country band’s mix of old school favorites. The group includes SG Wood on guitar/vocals, TJ Weger on guitar/steel-guitar and vocals, Don Cox on electric and upright bass, and Joe Martin on drums.

“We play classic country, honky-tonk and western-swing music from the ‘30s through the ‘70s,” explains TJ Weger, who is known throughout the Tampa Bay area for his diverse musical talents, which include playing with two other local groups, the Hummingbirds and Gatortooth.  “Everything from Bob Will and the Texas Playboys to Hank Williams Sr., Buck Owens, Johnny Cash, Ray Price, Charley Pride and Waylon Jennings, plus many more. Back when country music had lots of twang, and some of the attitude of the very early years of rock-‘n-roll and rockabilly.”

The band would like to create an album of original material that’s rooted in that old-style sound, similar to contemporary artists such as Junior Brown, BR-549, Dale Watson. “We have enough material to do that, but just need to find the time and funds to get in and get it done,” Weger said. “I think this band works so well because we all sincerely love this old music, and love playing it. It brings back lots of great memories for people and it’s just plain fun. Great songs where you can hear and understand lyrics that tell a great story in a style that’s uniquely raw, unadorned and American.” by Laura Kepner for Creative Pinellas