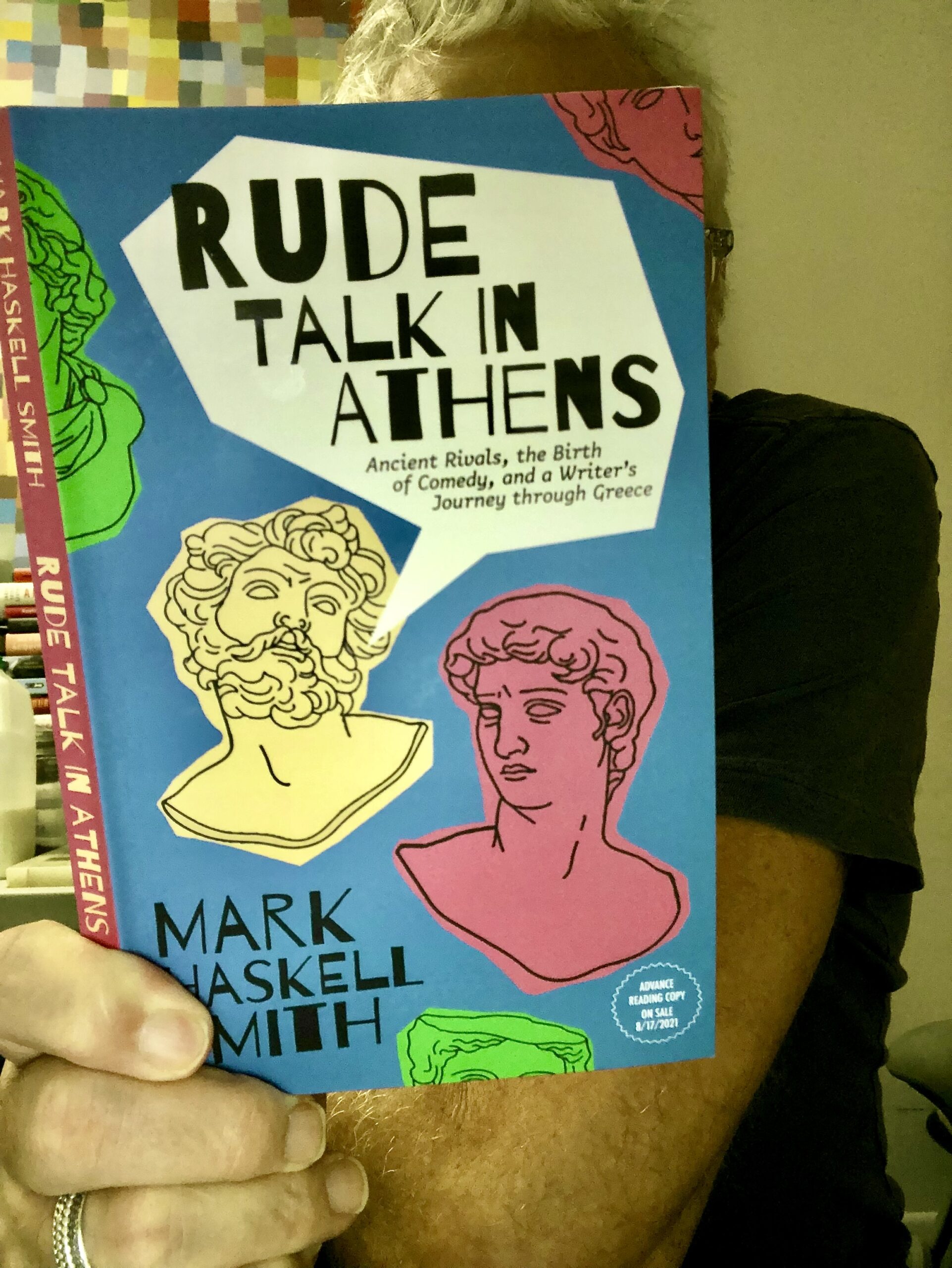 Share this:
Mark Haskell Smith Rude Talk In Athens: Ancient Rivals, the Birth of Comedy, and a Writer’s Journey through Greece In ancient Athens, thousands would attend theatre festivals that turned writing into a fierce battle for fame, money, and laughably large trophies. While the tragedies earned artistic respect, it was the comedies—the raunchy jokes, vulgar innuendo, outrageous invention, and barbed political commentary—that captured the imagination of the city. The writers of these comedic plays feuded openly, insulting one another from the stage, each production more inventive and outlandish than the last, as they tried to win first prize. Of these writers, only the work of Aristophanes has survived and it’s only through his plays that we know about his peers: Cratinus, the great lush; Eupolis, the copycat; and Ariphrades, the sexual deviant. It might have been the golden age of Democracy, but for comic playwrights, it was the age of Rude Talk. Watching a production of an Aristophanes play in 2019 CE and seeing the audience laugh uproariously at every joke, Mark Haskell Smith began to wonder: what does it tell us about society and humanity that these ancient punchlines still land? When insults and jokes made thousands of years ago continue to be both offensive and still make us laugh? Through conversations with historians, politicians, and other writers, the always witty and effusive Smith embarks on a personal mission (bordering on obsession) exploring the life of one of these unknown writers, and how comedy challenged the patriarchy, the military, and the powers that be, both then and now. A comic writer himself and author of many books and screenplays, Smith also looks back at his own career, his love for the uniquely dynamic city of Athens, and what it means for a writer to leave a legacy.

Mark Haskell Smith is the author of six novels with one-word titles including Moist, Salty, and Blown; as well as the non-fiction books Heart of Dankness: Underground Botanists, Outlaw Farmers, and the Race for the Cannabis Cup and Naked at Lunch: A Reluctant Nudist’s Adventures in the Clothing-Optional World. His work has appeared in the Los Angeles Times, the Los Angeles Review of Books, Salon, Vulture, Alta, and Literary Hub. He is an associate professor in the MFA program for Writing and Writing for the Performing Arts at the University of California Riverside, Palm Desert Graduate Center, and a frequent contributor to Life Elsewhere.

Following the conversation with Mark Haskell Smith – improvisation on a replica of an Ancient Greek Aulou played by Benjamin Simao. Two tracks, Stone and Can’t Live Like This Anymore from the LP, Stone by Athens-based musician Lola Demo, AKA, Erica Bach, and Dirty Magazine by Four Eyes AKA Erin Lovett from her album titled, I Hope This Finds You Well (Songs From Quarantine). Erin is based out of Athens, Georgia. The final piece of music is Stefan Hagel playing a reconstruction of an Ancient Greek Aulou.