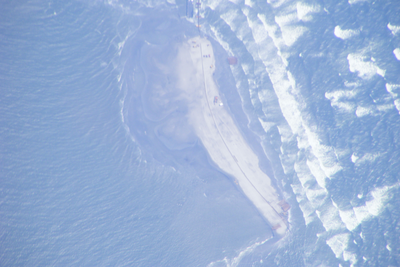 As oil from the underwater geyser has now reached all five of the Gulf states, the Coast Guard monitors the scope of the spill. WMNF took off from the US Coast Guard Clearwater Air Station last Saturday to get a look at how close the spill is to reaching more of Florida’s coastline.

As Florida defends its coast from approaching oil, the US Coast Guard is working every day to monitor the location of the spill. One local crew has been assigned to map the spill for several weeks. They share the data with the EPA, the National Oceanic and Atmospheric Administration, and other organizations involved in monitoring the spill. Petty Officer Robert Simpson says the Coast Guard is specially trained to handle environmental protection.

“It’s been ingrained in the Coast Guard for so long and it’s something that we have been working for. So something of this magnitude, of this scale isn’t something we typically respond to as nobody really has. But it’s definitely something we are responding and putting a huge effort, a massive effort towards.”

Simpson says the coast guard has worked on environmental disasters for decades.

“We do work with environmental disasters that happened in the oil spills, even for the most minor. Through the National Response Center, even to the most major, especially considering with these Exxon Valdez … incidents just in recent history.”

While many in the Coast Guard got sick from flying close to the spill and its fumes, Lieutenant Brian Boland isn’t too concerned since his C-130 plane is flying at an altitude of about 1500 to 17,000 feet.

“We tend to stay high enough. Our altitude keeps us clear if there are fumes and particles that are in the air. But if we were flying low, for the C-130 to pressurize we’d suck air from the outside for our engines, for pressurization, and for air conditioning. So if we were low for a while it might be a concern, and we’ve got guidance on what exactly we’re supposed to do if we’ve had prolonged exposure to it. But generally we’re staying high enough that the air we’re in is pretty clear.”

The Clearwater air station is sending up at least one C-130 plane and two H-60 helicopters daily to monitor the spill. Boland has only been on the mission a few days, but the Clearwater resident says that actually seeing the spill really hit home.

“You’re kind of removed from it until it hits home. And for me I’ve lived in Pensacola for about a year, so seeing these pictures of oil and tar balls washing up on the beach in Pensacola kind of drives it home. Then obviously, being in Pinellas County here at the air station, we’re a beach community. So as it keeps spreading, the kind of fear starts growing on just how big the spill will get.”

Co-piloting the C-130 was Lieutenant Commander Scott Murphy. He suggested that the wake of Hurricane Alex may have caused rough seas, slowing skimming operations and the effectiveness of chemical dispersants, but said the coast guard missions were not affected.

“It’s been raining but other than that it hasn’t been too terribly challenging. These guys got bumped around pretty good a few days ago, but it’s not that the C-130 can’t handle.”

Clear skies made finding the oil far easier, as clouds and rain have obscured visibility in the last few days. Contrasting with the waves washing up parallel to the shoreline, the shimmering oil sheen looked like thin ribbons perpendicular to the coast. They lined up side by side and reflecting sunshine brighter than the surrounding water. Using search and rescue cameras and radar, the crew can collect useful data about the size of the spill. Petty Officer Eric Hemme noted that the sea state has made oil more difficult to see.

“We’re seeing ribbons of oil that are a lot thinner than usual due to the sea surface state, 6 to 8 feet waves.”

The mission covered about 80 square miles of the spill, and co-pilot Lieutenant Brian Wiland said most of the oil was seen by barrier islands near Louisiana.

“And it was right when we got to some offshore islands you could really see that red oil that you’ve been seeing on the news, that was starting to wash up. And there was all the skimming, and that’s where the boats were sitting at. Then flying back this way, the Coast Guard guys on board that kind of have a better eye for this sort of thing, you could see the sheens off of Pensacola. Probably once we got about East of Pensacola it started dying down. By Panama City we really couldn’t see it as much, but there’s still some out there.”

It’s hard for the coast guard to tell which way the spill is moving, since they mainly track the spill day-to-day, while NOAA forecasts the spill’s direction.

“By Pensacola it’s started to. It’s less visible but it’s definitely still down there. If you were on a boat down there I have no doubt that your going to see it. But we’re kind of training ourselves as we go on, what to look for. Do you look for sheens? Do you look for streaks, dark spots, or light spots? With the waves, seaweed, and clouds the place drifts on your eyes a little bit out there. But I think right after today, I’m pretty sure, we have a good idea what we’re looking for. For the guys that got to see it, this is where you saw the heaviest, was these offshore islands off of Louisiana.”

Weather conditions can be problematic for the crew’s ability to find the oil, but Wiland says their equipment can still provide useful data.

“It’s easier to see closer to land as it starts pooling. It keeps getting thicker as it’s washed ashore. But when your offshore it depends on the sea state, the winds, or where the sun is. One day it looks like a dark spot and the next day if the sun’s shining off of it, it looks like a light spot. We’ve got some good data, and the radar tracking it. We covered about 80 square miles today so that’s information that they’ll be able to use. And that gave us some concrete data that we’re going to forward on here in the next couple of minutes. Then visually, it definitely helped. We’ve got some marine science technicians that have been flying with us and they’re kind of alone in their skills, because this is new to a lot of us.”

According to US Fish and Wildlife Service, more than 2,000 animals have died from the oil spill, and about 400 have been cleaned and released into safe waters. Robert Simpson says that Coast Guard vessels are often used to safely release surviving wildlife.

“We’re providing the platform to release the wildlife. So, once the wildlife that’s been effected by the oil has been taken to the right places, has been able to be cleaned and be ready to be released, it’s coordinated through the Unified Commands. A lot of times the Coast Guards’ use with our assets, available air crafts and boats, we use them to actually be able to release them back to an area that hasn’t been effected.”

This crew will continue to search for oil in the Gulf during the next two weeks. Seeing the spill even from thousands of feet above the water is a reminder that while the Tampa Bay area has yet to see tar balls or oily sheen, the Gulf ecosystem remains in distress, and will only worsen until the oil flow at the Deepwater Horizon blowout is sealed.