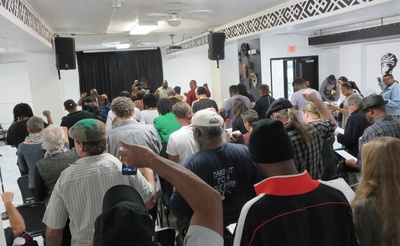 In the wake of a series of police killings around the country, Sunday in St. Petersburg community activists held a forum on police violence and institutional racism. The city’s new police chief backed out of participating- which didn’t sit well with the audience.

The forum was sponsored by the International People’s Democratic Uhuru Movement at their headquarters on 18th Avenue South. About 100 people attended. One of the speakers- Rev. Manuel Sykes Pastor of the Bethel Community Baptist Church said he was concerned about how law enforcement officers interact with people living in predominantly African-American neighborhoods.

What exactly does taking back the community entail? Omali Yeshitela, one of the panelists and founder of the International People’s Democratic Uhuru Movement, told the crowd.

The statistics are fuzzy concerning the total number of blacks killed at the hands of law enforcement per year. There is no hard data gathered from around the US. But the US Bureau of Justice Statistics shows clearly that blacks are 4 times more likely than whites to have their car searched after routine traffic stops. Jason Mills, a St. Pete resident, said he is living proof of police profiling.

Ashley Green has been protesting the police killing of Michael Brown and Eric Garner. She said she was disappointed at the lack of youth involvement in the panel discussions.

Saint Petersburg’s new police chief was invited to the Uhuru event, but did not attend. In a telephone interview, Chief Anthony Holloway, told WMNF that he already spoke with the Uhuru people. Holloway said he needed to gather more information before he could address the whole community. He says he’ll do that next month.

Another aspect of the nation wide protesting is the lack of ethical media coverage. Jenise Morgan, senior editor of the independently owned black newspaper, the Florida Courier, urged attendees to send her their stories.

Tuesday at the James Weldon Johnson Branch Library police Chief Holloway will attend a meeting to discuss his department’s interaction with the Black community. The Uhuru Movement plans to protest this event.