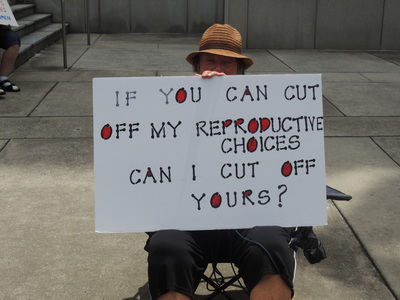 It’s been a week and a half since the U.S. Supreme Court ruled the retail chain Hobby Lobby and other corporations could refuse birth control coverage if it contradicts its religious edicts. Groups across the nation are continuing to show outrage through creative protests. Here in Tampa, about 40 activists took to the federal courthouse Thursday with signs condemning the decision.

“I was really frickin’ pissed off.”

“Of course it is. You have the Scientologists who don’t believe in any kind of drugs and, as far as I’m concerned, they just let people die. You have Jahova Witnesses that don’t believe in a lot of things and what if they have a company that I or she would happen to work for? I just think that company should not decide what kind of health insurance you have.”

Behind Axler were five men. In robes. Judge’s robes. With pig noses.

Frank Lupo, a retired school teacher, was one of them. The straps holding the nose on his face dug uncomfortably into the skin under his eyes. But no matter. Lupo was there to tell as many people as possible that this decision isn’t just an attack on women, it’s an attack on anyone who thinks corporations aren’t people and therefore, shouldn’t be entitled to First Amendment rights.

“The first salvo was the Citizens United decision which gave personhood to corporations and now they’re extending it to give religious freedoms that people enjoy – this country was founded to get away from the Church of England to have religious freedom. So, that’s a personhood issue. It’s not a corporation issue. Long before corporations even existed we didn’t want to have oppression by one religion or another. We wanted to have a separation of church and state.”

“They have absolutely nothing to do with personhood. And if I haven’t convinced you yet, they don’t even have a belly button.”

Lupo and Axler and all the others had a bunch of signs. Corporations aren’t people, women are. Thou shall keep thy theology off my biology. Ooh, and this one – If you can cut off my reproductive choices, can I cut off yours? One of the sign waivers was Eleanor Cecil with the Tampa chapter of the National Organization of Women. She calls the decision absolutely disgusting.

“It’s very targeted to women and that’s what’s so concerning too.”

Which brings up another sign. The judges have grudges on women. Dave Kovar, a retired Safety Harbor resident and supporter of women blames Chief Justice John Roberts.

“Everything that comes out of the Roberts’ court is 5-4, 5-4 and that is going to be Chief Justice Roberts’ history is that he was a weak Chief Justice. He was obviously legislating from the bench with a small cadre and all we need to do to change all this stuff is flip one judge.”

But it’s not that simple. Supreme Court Justices don’t have term limits. Basically they can serve for the rest of their lives or until they decide to resign. Only when that happens can the president nominate and the Senate confirm a new justice. That’s why Lupo, the retired school teacher, said it’s important to get people in office who will clean things up a bit when the time comes.

“Hopefully enough women and enough men who support them will go to the polls and make sure that when we have a president that makes a nomination it’s not a nomination that legitimizes people’s rights for corporations because that’s the threshold mistake that was made here and it’s just going to continue. It’ll have more and more application.”

The Senate is fast-tracking a bill that would undo the Hobby Lobby decision, but it will likely be dead on arrival in the Republican-controlled House.