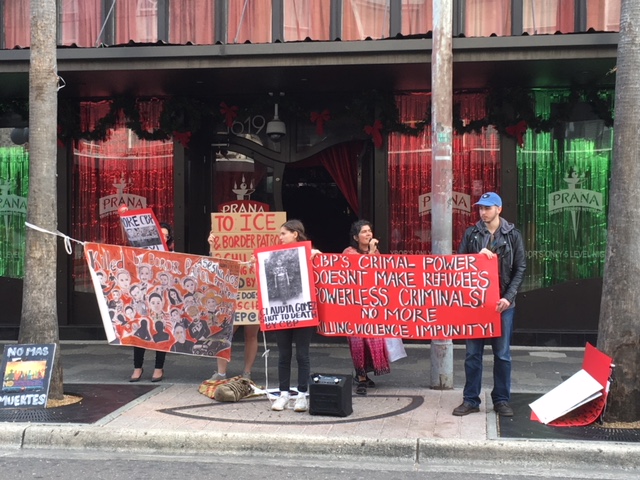 Last Wednesday in Tampa’s Ybor City a group of about a dozen people protested the killing of people in Mexico by US Border Patrol agents.

The Associated Press is reporting this morning that: “U.S. authorities fired tear gas into Mexico during the first hours of the new year to repel about 150 migrants who tried to breach the border fence in Tijuana.

U.S. Customs and Border Protection said in a statement later Tuesday that the gas was used to target rock throwers apart from the migrants who were trying to cross.

“No agents witnessed any of the migrants at the fence line, including children, experiencing effects of the chemical agents, which were targeted at the rock throwers further away,” the statement said.

An Associated Press photographer saw at least three volleys of gas launched onto the Mexican side of the border near Tijuana’s beach that affected the migrants, including women and children, as well as journalists. The AP saw rocks thrown only after U.S. agents fired the tear gas.”

Our guests today are Ana Maria Vasquez with the Border Patrol Victims Network (https://www.facebook.com/pg/Border-Patrol-Victims-Network-Red-de-Victimas-de-la-Patrulla-Fronteriza-452623394841164/posts/) and Dezeray Lin with Occupy ICE (https://occupyice.org/). Vasquez and Lin took part in a non-violent protest last Wednesday afternoon in Tampa’s Ybor City in front of the Customs/Border Patrol office in YBOR City. The event was to call for justice for civilians in Mexico reportedly killed by US Border Patrol agents in the past decade (https://news.vice.com/en_ca/article/bjdaga/what-happens-when-u-s-border-patrol-kills-in-mexico). The activists also called for more humane treatment of undocumented immigrants in the US. The protest in Ybor included a ten minute human blockade of Seventh Avenue by the immigration activists. Lin and Vasquez say that the demonstrators were hit by automobiles (with no serious injuries) and that the Tampa Police Department failed to apprehend the motorists involved in the collisions.