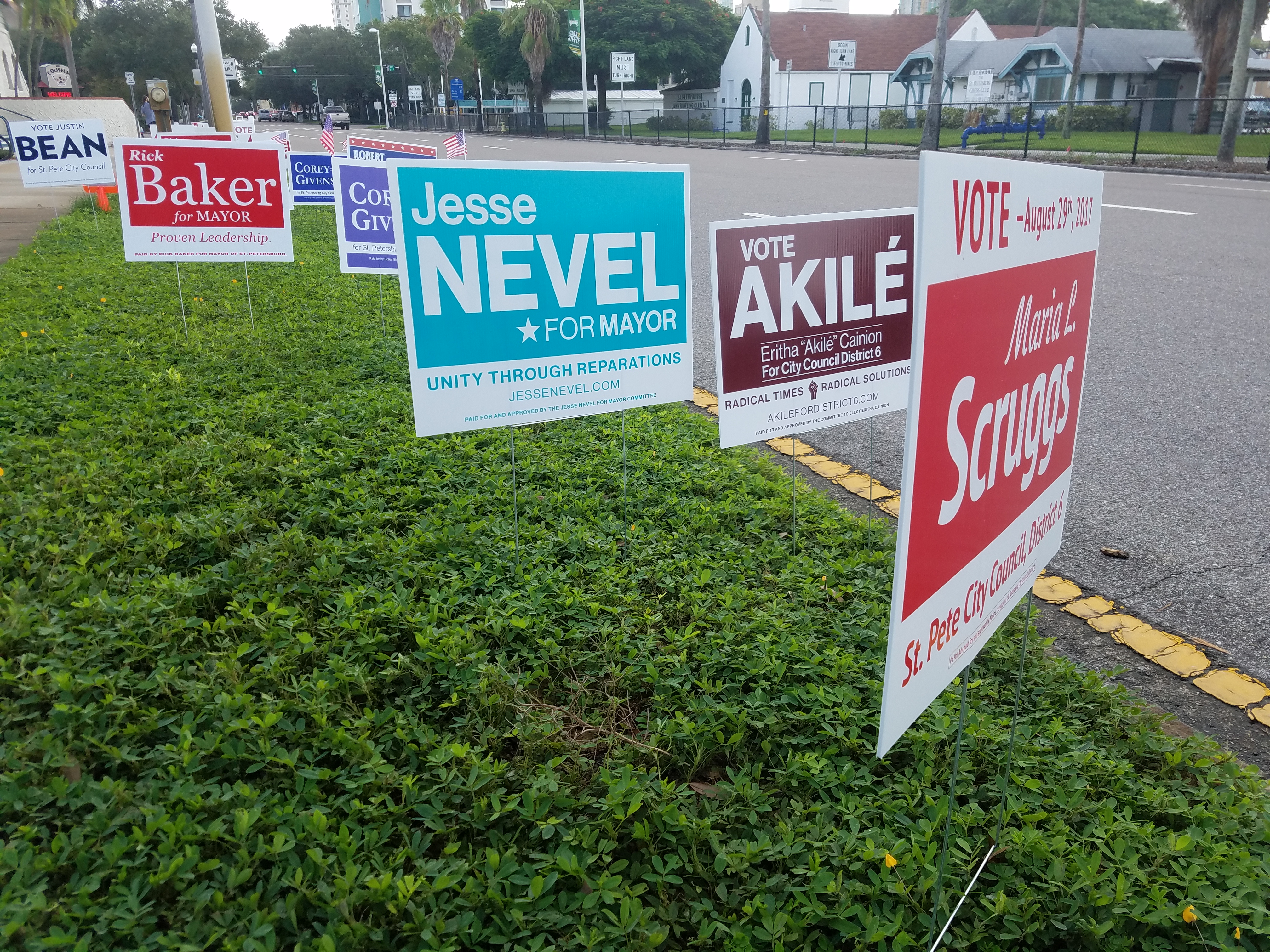 Update: Rick Kriseman and Rick Baker will face off in the general election for Mayor on November 7. In District Six, Justin Bean will face Gina Driscoll.

WMNF News called each of the Mayoral candidates and asked them to sum up their campaigns in one minute. Listen to their responses in the order they’re listed on the ballot:

“Well Sean, I think it’s because the key to the contrast between the two candidates for Mayor is proven leadership. During my two terms as Mayor of St. Pete, we really led a renaissance downtown, we worked to develop midtown, our school programs that turned our schools around and we focused very much on driving the city forward. And in the last 4-years, we’ve gone back in a lot of ways: our wastewater system, our sewage system; we closed down a sewer plant, dumped millions of gallons of sewage in the bay, we’ve lost ground on midtown, we’ve lost ground on our schools and I will get us back on track.”

“Well, the reason why: I’ve been into the community for the past 20-years, back and forth to Tallahassee, also Washington D.C., fighting for a better quality of life for our citizens here. I’ve fought for affordable housing, economic development, bringing assets for our small business community, ensuring that we have an economy that can thrive on a global market. Also, for rights restoration. I’m also for youth organizations; getting our youth more sustained and acclimated, so that they too can be successful, just as us as adults here. Yeah, and that’s pretty much it. You know, just fighting to make a change and make it happen here, in the city.”

“Well, certainly there’s only one candidate that’s been endorsed by the former President and that’s because of the policies that I’ve put forward, which is recognizing giving people a second chance, living wage, caring about climate change and knowing that it’s something that we’ve got to move forward and take care of and being a diverse, tolerant, community. So, I’m honored to have President Obama’s endorsement. I think if we want to move this city forward, the choice is pretty clear and I want to encourage people to go out and I’d love to have their support.”

“Simply, for the last 25-years I’ve served this community in this capacity of the community activist and having my own non-profit, Successes Unlimited. I’ve been a watchdog of City Hall. I’ve listened to all of the promises that they have made to the black community. I have listened to the promises and all the plans. Central Avenue has had more plans than any other area in the city. You see it completed. But, I’m trying to wonder why we have not completed 22nd Street, 16th Street, 9th Street, 4th Street on the south side. I think the Mayor changing the CRA boundaries was a disaster because it opens up ‘double-dipping’ for Central Avenue. With me, it’s all about the people. It’s time for us to unite together as one, to get the job done.”

“I’m Jesse Nevel running for Mayor of St. Petersburg, Florida, on the platform of Unity Through Reparations and economic development for the black community. We are running against the status quo. We’re running against big money. We’re running against the political establishment. We are building a people’s movement to build a genuinely progressive agenda. You cannot have a progressive agenda without addressing the injustice and oppression imposed upon the black community and that is why our platform is called: Unity Through Reparations, because, when we put reparations for the black community in the center, we can solve every other problem that we face in the city, from corruption to the overrunning of downtown St. Pete with high rises, to the high cost of rent, the lack of affordable housing. All of these problems can be solved through a public policy of reparations and economic development. That’s why I’m running alongside Eritha “Akile” Cainion for District 6 City Council.”

If no candidate gets a majority, there will be a runoff in November.

WMNF News also spoke with several of the District Six candidates and with voters.